Ever since he left Korea at the very end of 2008, there have been constant whispers that he might return. First he was only going to be away until the end of Spring – “He’s gone to spend his money, but he’ll be back to get some more”, local jockeys muttered darkly in the Busan weighing room. Weeks turned into months and then a year. Still the speculation continued though and today Toshio Uchida “Mr Pink” – friend of the punters – made his return to Busan Race Park twenty-two months after he left. 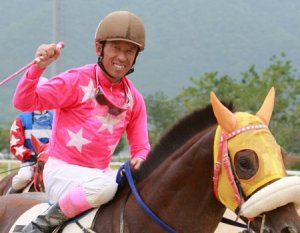 No wins today but Mr Pink is back (Pic: KRA)

Veteran Japanese jockey Uchida arrived in Korea in May 2008. He quickly proved himself to be a class act in the saddle; able to judge the pace of a race far more effectively than the local riders – the legacy of nearly thirty years of experience in Japan. He quickly became something of a phenomenon at Busan. Throughout the rest of the year, headlines such as “Uchida Lands Five at Busan” and “Uchida Dominates Busan” became a regular Friday night ritual on this blog.

Despite giving his rivals a four-month head start, he raced away with the 2008 Jockey Title at Busan, scoring a total of 69 winners from 311 mounts. Such was his popularity that when he made his only appearance at Seoul Race Park on Minister’s Cup weekend that autumn, the capital’s punters chanted his name and thronged the paddock ten-deep to get a close up view of the man who had suddenly made them pay attention to the Busan simulcast.

Today Uchida had a quiet day. Debuting in race 4 on Joe Murphy’s Beautiful Bogo, he finished last of nine and didn’t get much closer despite a couple of reasonably well-fancied runners among his five rides; fourth place on Cheonman Yeongung being his only money finish.

Uchida is back in Korea on a short-term license. Punters will hope it’s for the long term. He joins a very strong Japanese contingent at the southern track in the shape of Yoshi Aoki and Hitomi Miyashita.

* In the feature race at Busan today, Winning Perfect was the shock 38/1 victor in the feature race. The three-year old colt held off favourite Triple Sinhwa in the ten-furlong handicap. Racing returns to Busan on Sunday when there are six races from 12:40 to 16:30. Uchida has two rides.