Over the past few years, the Korean Racing Authority (KRA) has become one of the major purchasers at sales around the world, especially in the USA. In order to protect the Korean bloodstock industry, there has traditionally been a legal limit on how much Korean buyers can spend on a single horse at overseas sales. In recent years this has been relaxed, however (as of 2016), a colt of gelding must be bought through an auction and may cost no more than US$50,000 if it is to be imported into Korea. There are now no limits for fillies  with the intention that after racing they will become broodmares and help improve the domestic breeding stock. There is also no limit on the amount that can be spent on stallions and broodmares.

At a two-year old sale, a horse will usually – although not always – be purchased by the Seoul or Busan Racehorse Owners’ Association rather than an individual owner. A few weeks after the new purchases have gone through quarantine and been flown to Korea, they will go through the sales ring again, when they will be sold on to private owners. It is not uncommon for a horse to fetch many times his or her original value at this stage.

After this sale, the horse will now be with an owner. All owners are registered with the KRA and are attached to one or other of the two thoroughbred race courses in Korea; Seoul or Busan. While they may spend some time at the KRA’s training centre in Jangsu – or at a private farm if the owner has such facilities – most two-year olds join straight up with their assigned trainers at Seoul or Busan. Facilities at both tracks are first-class – although some of the older stables at small are a little on the small side and are scheduled for renovation soon. Horses from Seoul and Busan only meet in the very biggest races although inter-track transfers are becoming more common.

The training process then begins and the horse will be listed in the Korean Studbook. In order to be eligible to race, a horse must take part in an official race and barrier trial. These take place at Seoul on Friday mornings and at Busan on Saturday mornings. The race trial involves parading in the paddock, going to the start, being loaded in the gate and then racing five furlongs in a competitive time. During the race-trial, they will be ridden by a professional jockey and assessed by the track stewards. So long as they pass (and complete five fulongs in faster than 1:07.0), they are ready to race.

Racing: Korean racing operates with a rating system with six classes. Classes 5 and 6 are only for Korean bred horses while Classes 1 and 2 are totally integrated. Classes 3 and 4 have some races only for Korean breds but others open to all. 90% of races are handicaps with weight assigned according to rating although there are allowances for fillies and horses aged under four-years-0ld.

New imported horses are placed in class 4 with an assumed initial rating of 42. Few class 4 races are restricted to two-year-olds so it is not uncommon for a two-year-old imported filly to find herself up against a four-year-old gelding in her very first race. Prize money in Korea is generally very good. At class 4, the average win prize money is about US$28,000.

The vast majority of class 4 races are between 1000 and 1400 metres. Once a horse has either won twice – or placed three times – their rating is likely to qualify them for class 3 where they will compete for higher prize money. Foreign-bred horses are not eligible for the three-year old Classics; the KRA Cup Mile, Korean Derby, Korean Oaks and Minister’s Cup are all restricted to Korean-bred runners as are a number of other Group races. However, the biggest races of the year – the Korea Cup at Seoul and the Mayor’s Cup at Busan are open, as is the most prestigious race in the Korean calendar, Seoul’s Grand Prix Stakes, run in December each year.

Race Days: During 2016, there is racing at Busan on Fridays and Sundays and racing at Seoul on Saturdays and Sundays. Racecards for Busan are posted on the KRA’s website on each Wednesday evening and for Seoul each Thursday evening. Results and race videos are posted on the KRA’s official website within a few minutes of the finishing order being confirmed. The horse’s individual Studbook page is updated a few hours later. 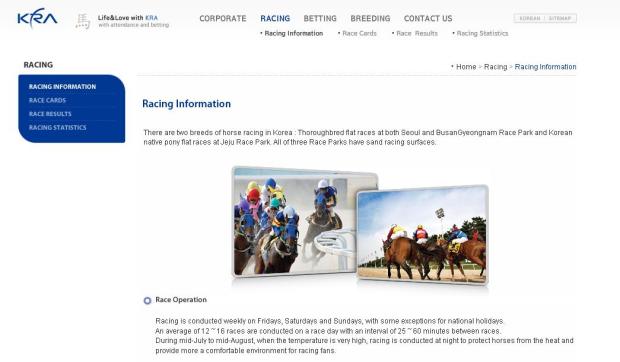 Race videos: Due to strict laws prohibiting gambling in Korea, live streams are unavailable, however, the race video for every race is posted along with the result at the KRA’s website.

After racing: Almost all fillies are imported with a broodmare career in mind, which is why there is a higher price limit on them. Retirement and re-training facilities have had a bigger emphasis placed upon them in recent years. It is true, however, that just as in most racing jurisdictions, Korea has both good and bad owners. The KRA Studbook tracks all horses after retirement, however, should a horse’s ownership be transferred again after retirement, the Studbook’s accuracy is reliant on the seller informing the registry, whch doesn’t always happen.

Further Information: This blog tries its best to respond to all requests for information. If there is a horse you would like to find some information about, email hrikorea@gmail.com