Grand Prix Stakes winner Clean Up Joy went to the races for the first time in 2017 on Sunday afternoon and 6-year-old didn’t disappoint, utterly crushing a class 1 field to win a Championship Series race over 2000M. Meanwhile at Busan, Korea’s 2016 Meydan hero Success Story finally returned to the winner’s circle.

Clean Up Joy made short work of Triple Nine and Power Blade, both currently at this year’s World Cup Carnival in Dubai, when winning the Grand Prix over 2300M in December. Sunday’s field was much weaker but Clean Up Joy had shunted them all out of the handicap and was giving a minimum of 8kg weight advantage – the only time he lost at Seoul in 2016, he was giving the same weight away.

It made little difference as, with Djordje Perovic on board for the first time, Clean Up Joy made short work of his opponents, sprinting away in the straight to win by an eased down five lengths. Clean Up Joy is now Korea’s leading contender for the Korea Cup race in September.

Down at Busan, Success Story finally returned to where he belongs for the first time since late 2015.

Success Story stunned Korean racing watchers by landing two 3rd place finishes at the Dubai World Cup Carnival last year (famously behind – a long way behind – California Chrome on the second occasion) and paved the way for five Korean horses to participate at Meydan this time around. Since returning to Korea he has raced in some of the biggest races, generally coming close but not breaking through.

Finally on Sunday he found himself at an ideal distance – 1800M – in a race where he would get an easy lead and where the main danger (Ms. Margaux) was a closer carrying more weight. Success Story duly obliged, leading every step of the way and still eight lengths clear on the line.

Triple Nine and Power Blade are now preparing for Super Saturday at Meydan. They may both have bested Success Story during the past year, but were it not for his exploits, neither would likely be there this time.

Grand Prix winner Clean Up Joy, who downed both Triple Nine and Power Blade at Seoul in December, will make his seasonal debut in the capital on Sunday afternoon. Meanwhile last year’s Meydan Hero Success Story looks to have winning chances at Busan. 11 races at Seoul from 10:40 to 18:00. There are 6 at Busan from 12:35 to 17:00. 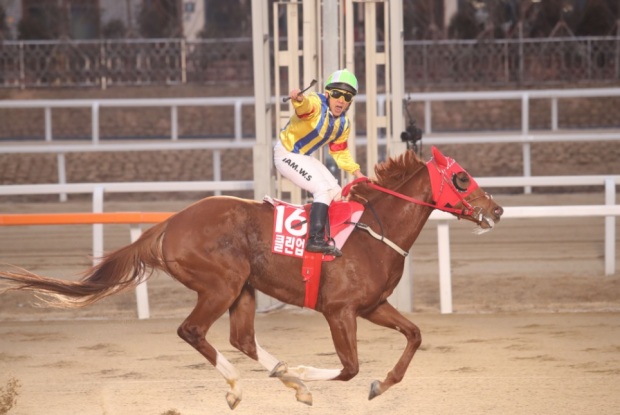 Clean Up Joy won the Grand Prix Stakes in 2016

English race cards are here. Read on for notes on every horse on the cards (except Busan race 1 which is the only race not being simulcast overseas):

2. SUPER FLY – Didn’t do much on debut. Can improve today.

There used to be a saying among certain Korean punters that at Seoul you bet the jockeys while at Busan you bet the trainers. As we head into this weekend (11 races at Busan on Friday from 11:30 to 18:00), that may not be the case anymore. 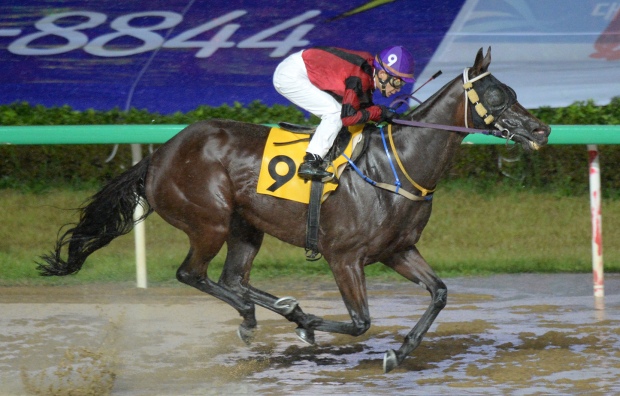 Yonekura Satoshi is one of a number of in-form jockeys at Busan right now (Pic: Ross Holburt)

Of course, it’s probably best to bet the numbers (although my own personal strategy used to be to bet whichever one had a funny sounding name) but there was an element of truth in it; the top trainers were at Busan while the top Korean jockeys were at Seoul.

The top trainers are still at Busan in the shape of Kim Young Kwan, Peter Wolsley, Bart Rice and Thomas Gillespie but increasingly the jockeys are too and the news that Moon Se Young is Singapore-bound further drains the Seoul talent-pool which lost Jo In Kwen, Jo Sung Gon and Ham Wan Sik – all capable Korean jockeys – to the south coast at the start of the year. That’s all to Busan’s benefit.

With Yonekura Satoshi in superb form and newcomers Marios Mina and Andrea Mezzatesta getting off the mark last week while Darryll Holland continues to do what Darryll Holland does, the Busan weighing room is as competitive as it has ever been. With the exception of Jo, all will be in action on Friday. English race cards are here, notes on races scheduled for overseas simulcast are below:

2. VICTORY DAY – Three figure odds for all five starts and a long shot here too.

3. GOLDEN BULLET – Much improved 4th on first try at distance and a contender today. END_OF_DOCUMENT_TOKEN_TO_BE_REPLACED

The Singapore Turf Club has announced that eight-time Korean Champion jockey Moon Se Young has been granted a three-month visiting jockey’s license to ride at Kranji. 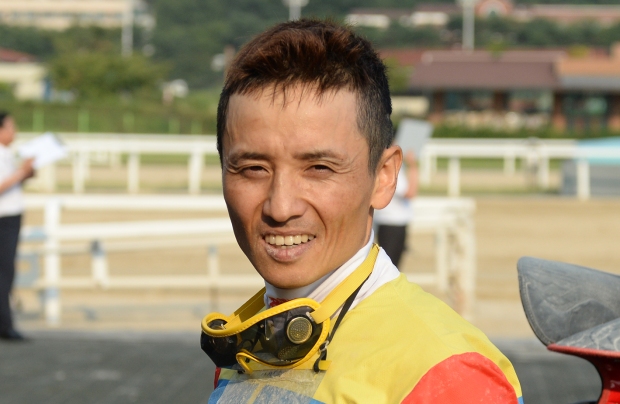 Now 36, Moon debuted in 2001 and upon returning from national service, won his first Championship in 2008. Injury prevented him from repeating the feat in 2009 but in each subsequent year he has ended the season as Seoul’s Champion jockey, partnering more than 100 winners every time.

Moon rode his first Listed race winner in 2003 and his first Korean Group winner in 2004. He won Korea’s most prestigious race, the Grand Prix Stakes on Bally Brae in 2007 and the Korean Derby on Jigeum I Sungan in 2012. In total he has ridden more than 1300 winners and is only the second Korean jockey to surpass more than 1000. 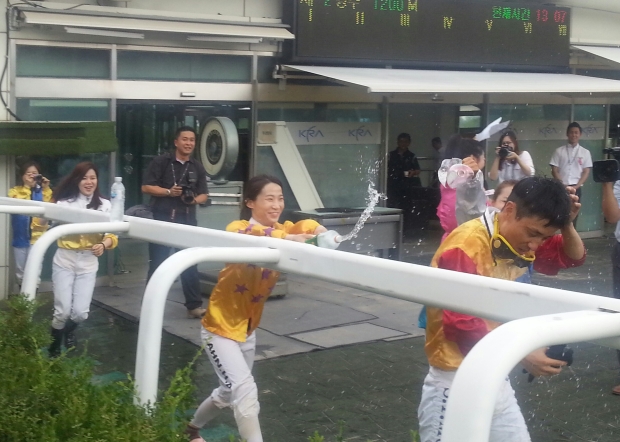 A brief suspension and a trip to Macau (where he rode for a short time in 2012/2013) for a Jockey Challenge meant Moon had made an uncharacteristically slow start to 2017, however, he roared back into form this past weekend winning the last four races on Sunday’s card at Seoul including his 3rd Donga Ilbo Cup win. That came on Meni Money, whose dam Pocketful Of Money, Moon partnered to win the KRA Cup Classic in 2007.

While the presence of Djordje Perovic in the Seoul weighing room had at last presented him with some domestic competition, Moon has long harbored ambitions to test himself in superior riding company. Additionally, with Busan-trained horses dominating the major races in Korea in recent years (internal Jockey Union rules prevent Seoul jockeys riding Busan horses and vice-versa), Moon’s opportunities in the very biggest races have been limited, leading him to look elsewhere for a new challenge.

Moon Se Young will relocate to Kranji for an initial 3-month period as soon as his work permit is issued.

Last year’s winner Pinot Noir put up a valiant defence of her Donga Ilbo crown but ultimately was to be denied as Meni Money came home in front  in Seoul’s second Listed Race of 2017.

With the well-fancied Touch Flying found lame and declared a non-runner less than an hour before the race, it was Meni Money who was sent off as favourite and she was kept handy by champion jockey Moon Se Young in the early stages. Meanwhile, Park Hyun Woo on Pinot Noir employed the now 7-year-old mare’s familiar tactics of dropping to the rear on leaving the gate before going wide around the field in the back straight to take the lead.

Pinot Noir would lead into the straight but Meni Money came alongside with a furlong to go and ran on to prevail by just under a length and a half. Argo Champ ran on well for 3rd.

Meni Money [Menifee-Pocketful Of Money (Running Stag)] is out of a dam who for a number of years held the track record at today’s distance of 1800M. She won five and was runner-up in five of her first ten career starts, including 2nd place in the Korean Oaks in 2015. However, since then she had only added a further two victories prior to today. Her previous biggest victory came in the 2015 Sports Seoul Cup.

The win was one of five on the day for defending champion jockey Moon Se Young. Earlier, he won on Lion Rock (Ecton Park), a three year-old “full” brother to reigning Horse of the Year Triple Nine. Lion Rock moved to three from three with a facile victory in the 1700M race 8.

Two unbeaten records came to an end at Busan though. American Power (Ecton Park) didn’t travel especially well on his first try at a mile and gave himself too much to do in race 5, ending up in 2nd place. A race later, US import Drop The Beat (Mad Flatter) also went down to his first defeat.

Those defeats were in contrast to the showing a day earlier by Final Boss (Menifee). The champion juvenile of 2016 barely required second gear to maintain his winning streak over 1800M at Seoul:

Last year in the snow, Pint Noir won the Donga Ilbo Cup just before another blizzard forced racing to be abandoned for the day. There should be no weather issues this time around as she returns to defend her title against nine rivals over 1800M. 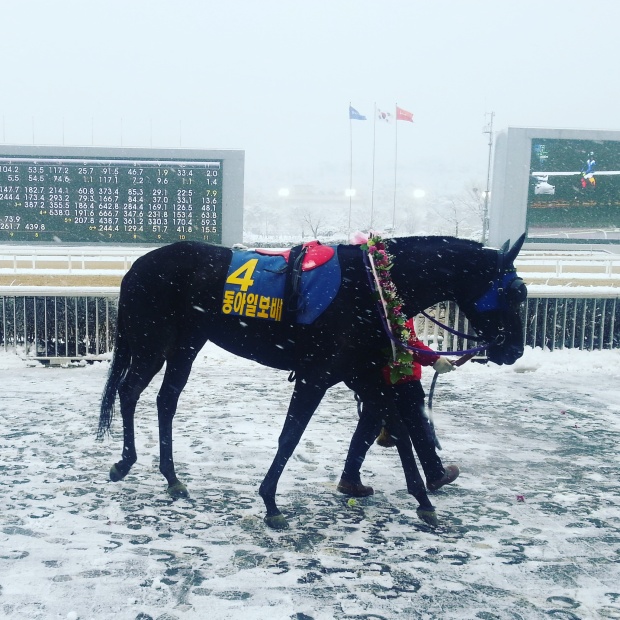 She probably won’t be favourite, with the likes of Meni Money and Touch Flying among a competitive field in the Donga. There’s plenty going on elsewhere as well with a total of 11 races at Seoul from 10:40 to 18:00 and 6 at Busan from 12:35 to 17:05.

English race cards are here. Notes on the three overseas simulcast races, including the Donga Ilbo Cup are below:

1. LION ROCK – Full brother to Triple Nine who is currently racing at the Dubai World Cup Carnival. Two for two so far and favourite to maintain his 100% record today. END_OF_DOCUMENT_TOKEN_TO_BE_REPLACED 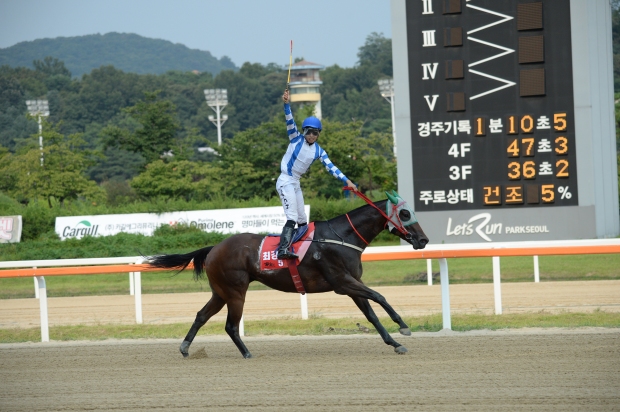 Choegang Schiller won the Asia Challenge Cup in 2015. He returns to action at Seoul on Saturday (Pic: Ross Holburt)

English race cards can be found here. Notes on races to be simulcast overseas are below:

1. UBIQUITOUS – Laboured in two starts since returning from five months out. Drop back to 1000M may benefit.

It was a good start to the weekend for both Marios Mina and Andrea Mezzatesta as the visiting jockeys both partnered their first Korean winners at Busan on Friday afternoon.

Mina and Mezzatesta are among five overseas jockeys currently licensed in Busan. The ther others are Britain’s Darryll Holland, Japan’s Yonekura Satoshi and Italian Mirko Sanna.

Temperatures soared to the high teens in Busan this week and while it will have cooled down a little bit by the time horses come under orders, we’re still in for a mild weekend so it’s the ideal time to come racing! Busan gets us underway with 11 Friday races from 11:30 to 18:00. 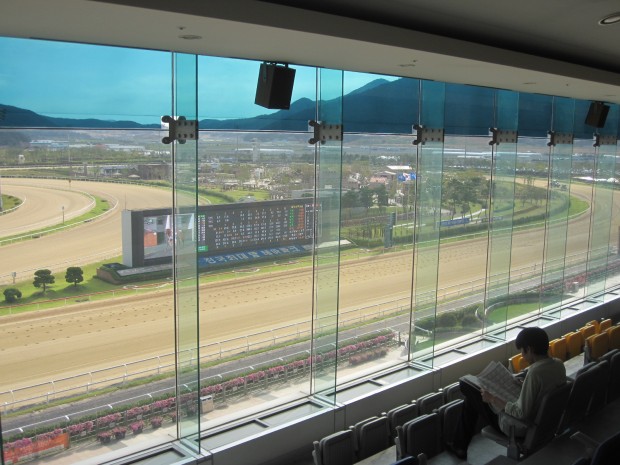 English race cards are here. Notes on overseas simulcast races are below:

4. MISS GANGJA –No better than 5th in 13 starts. Should beat a few but others will be better. END_OF_DOCUMENT_TOKEN_TO_BE_REPLACED

At Busan last year’s Oaks winner Ottug Ottugi faces off with Mayor’s Cup winner Beolmaui Kkum. However, both of them could well be beaten by the respective stars from the stables of Bart Rice and Thomas Gillespie. Buhwarui Banseok and Champ Line are both still on the rise and both have strong claims in the 2000M Championship Series race (see video of Buhwarui Banseok’s New Year’s Eve victory above).

English race cards for both meetings are here. Notes on Seoul races (which will be shown on Sky Racing in Australia) are below:

4. SUPER CHANCE – Out of a Korean Oaks winner. Trial was average but top jockey booking.

6. HIGH ALYDAR – Led in his trial but weakened late on. Could be considered.

7. JAELONGI – 3rd of 12 at long odds on his second start on Jan 14th and will be much shorter today.

8. RICH YEOJANGGUN – Looked the best of the debut makers in trials.

9. SEUNGRIUI YEOSIN – 2nd on debut on Jan 8th beaten a length having led until a furlong out and is the favourite here.

Verdict: It’s probably best to go with experience here and (9) SEUNGRIUI YEOSIN showed enough on debut to suggest he knows what’s he’s doing and should take some beating. (8) RICH YEOJANGGUN looked competent in running 2nd in his trial and if he brings that to the races, can challenge. (7) JAELONGI has to be respected following his vast improvement last time, six months after his debut. Hard to know what to make of the rest with (3) BAENONGI perhaps most likely.