It was close, but up against some of the brightest young imported fillies, Korean bred Urikkot did just enough to clinch victory in the Selangor Turf Club Trophy at a bitterly cold Seoul Race Park this afternoon. 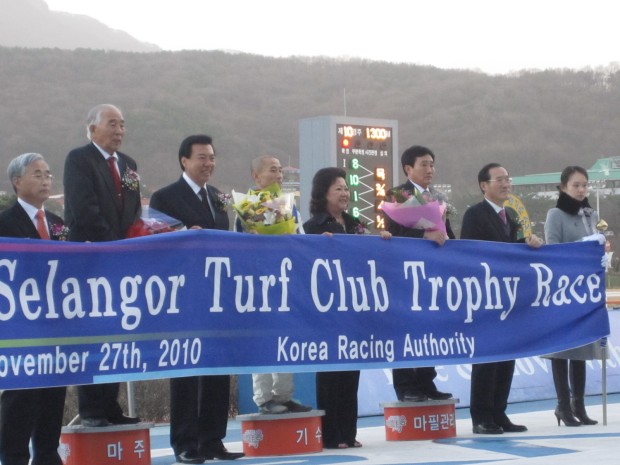 Sent off the slight favourite, Cho Kyoung Ho and the lightly raced three-year old hit the front in the home straight after early leaders Blown Sky High and Kkochyeol faded and though tiring herself, built up enough of a lead to hold off the challenge of Blueband Mama and Boo Min Ho who swept by just the wrong side of the line.

A late starter, Urikkot (Creek Cat) only debuted as a three-year old this year. She’s now won four of her six starts. This was the sixth running of the Selangor Turf Club Trophy and STC Chairman Datuk Cham was on hand to present the awards. Unfortunately, hardly anyone was around to hear his speech as the 40,000 punters in attendance had retreated to the warmth of the grandstand to escape the biting wind, long before the presentation got underway. 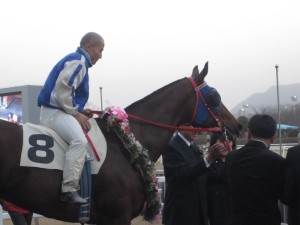 Urikkot and Cho Kyoung Ho in the Winners' Circle

Also in attendance were two Malaysian jockeys, Veerapan Sivan and Salleh Mutaza. Neither troubled the placings in the STC Trophy, however, Mutaza scored a third placed finish in race 5 on Daedamham.

For jockey Cho Kyoung Ho, it was a second trip to the Presentation stage in as many weeks, following Dongbang Rose’s Nonghyup win last Sunday. The day got even better for Cho as immediately after the STC, he guided Lucky Mountain to victory in the afternoon’s feature handicap. The five-year old mare scored a half-length win over Winner Prince and favourite Janggun Bada. With main rival Moon Se Young riding his last weekend of the year before a five-meeting ban kicks in, Cho is also in pole position to claim the jockeys’ championship.

Speaking of jockeys, it was a good day for the small contingent of female riders in Korean racing. Lee Keum Joo rarely rides these days but she made an appearance in race 1 at Seoul today and it was a winning one as she partnered Cheonguntaehu to a half-length win over favourite Yahoo Event. It was just a seventeenth win for Lee in a nine-year career. Already closing in on that figure is Kim Hae Sun. The twenty-two year old claimed her eleventh win as she got the best of a four-way photo finish to race 6 on filly Miss Nine.

Down on Jeju Island, Kim Da Young was newly licensed this year and she already looks set to follow Na Yu Na and Kim Ju Hee who are both established as top riders in the pony racing colony on the island. Today she scored her fourth winner, guiding Uryangsidae – a pony she’s won on before – to victory in race 2.

The Malaysian flag was flying at Seoul Race Park today

Racing returns to Seoul tomorrow when Sun Blaze and Heukdujanggun will be favourites in the Breeders’ Cup at Seoul Race Park. There are eleven races at Seoul from 11:20 to 18:10 and six at Busan from 12:40 to 16:30.