New Korean racing movie Grand Prix, starring Kim Tae Hee and Yang Dong Geun and part funded by the Korea Racing Authority, will be released in cinemas across the country this Thursday, September 16. This is the trailer that has been playing in Korean movie theatres for the past couple of weeks:

Here’s the first one…:

It was another big race win for Cho Kyoung Ho as Geumgangi swept to victory in the Munhwa Ilbo Cup at Seoul Race Park this evening. And the jockey followed it up by guiding long-shot Victory Town to an unlikely victory in the Seoul Kyeongje Sinmun Cup just thirty minutes later.

Back in the Winner's Circle: Geumgangi won the Munhwa Ilbo

Geumgangi was sent off fourth in the betting in a race which was marred by chaos at the start after Blooming reared in the gate bringing down Daehanbobae in the neigbouring stall. Both were ruled unfit to start after being checked by the vet. When the remaining twelve did get underway, there were further distressing scenes as Mr. Swing broke down rounding the final turn. Meanwhile, at the front of the race Cho and Geumgangi got their act together in the home straight to get the better of a pair of outsiders, Choedaepungseok and Tamnaseontaek who filled out the placings.

It was a third consecutive win for the improving Geumgangi. Once the ceremonies were complete, Cho re-emerged for the Seoul Kyeongje Sinmun and pulled off an unexpected win when the appropriately named Victory Town comfortably got the better of odds-on favourite Angus Empire by three lengths. 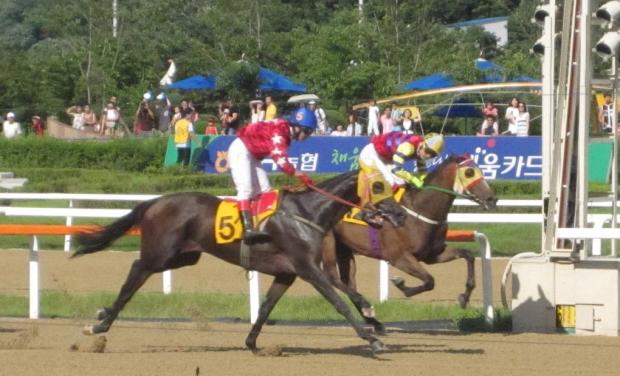 Jung Ki Yong, far side, allows himself a wry glance as Lee Shin Young (No.5) comes through to land race 5

That completed a treble for Cho, who is now closing in on Moon Se Young at the top of the jockeys’ championship, after he also won on favourite Balhaemyeongjang in race 6. Lady rider and trainer-in-waiting Lee Shin Young scored a battling victory on Nike Seven in race 5 while four-year-old gelding Bichui Adeul finally broke his maiden at the twenty-sixth time of asking in race 8.

Racing on the peninsula now takes a (very) short summer break and actress Kim Tae Hee was on hand once more to see punters off on their holidays. Kim and actor Yang Dong Geun were filming the final race-day scenes for their movie “Grand Prix”. 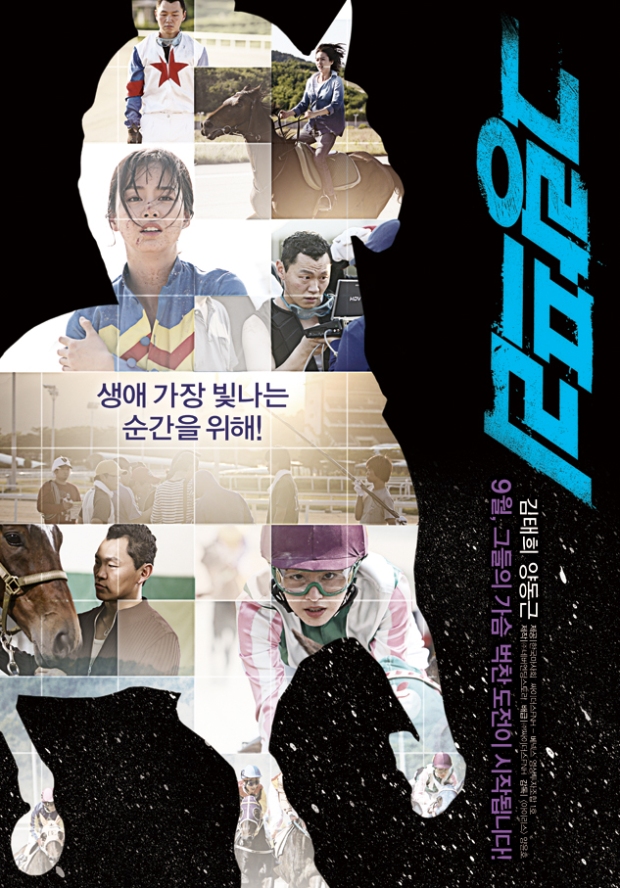 Interestingly, while Kim Tae Hee has her own specially designed green, white and pink racing silks, the leading lady also wears all time leading jockey Park Tae Jong’s silks and leading man Yang wears those of young jockey Choi Won Joon – to whom he bears a passing resemblence. More official stills from the movie can be seen here.

Gyongmaman is disappointed to see himself blurred out in the paddock shot, but if you want to see his exclusive behind the scenes pictures click here!.

Grand Prix is scheduled for an autumn release.

Kim Tae Hee waits to get on

For two weeks now, the racetrack has been decked out in flags and banners for the production. Today an extra number 9 horse – complete with a ribbon in its tail – joined the runners in the paddock prior to race 9. 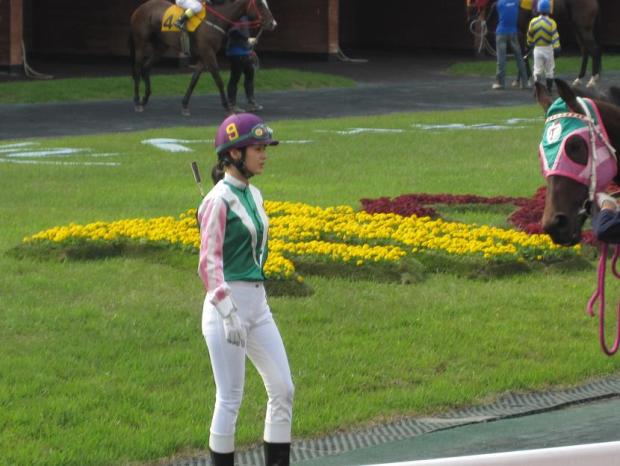 Kim emerged from the tunnel along with the jockeys and, after a little difficulty as her mount was playing-up, was given a leg-up by a lucky groom. She then completed a lap of the paddock and followed the rest of the horses back into into the track-bound tunnel. 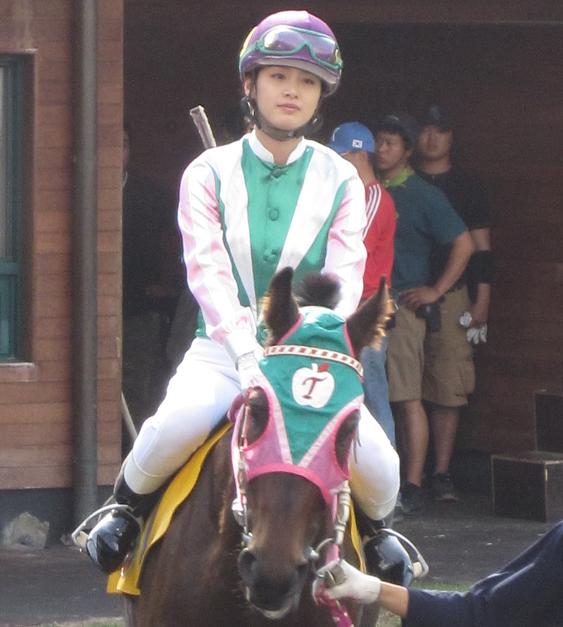 Kim Tae Hee - once up she certainly looked the part

To their credit, punters refrained from the abuse they normally greet any newcomers to the paddock with and Kim, for her part, certainly looked assured in the saddle.

Grand Prix, which is part funded by the Korea Racing Authority is scheduled for an autumn release. It’s production was disrupted when the original male lead, Lee Jun Ki, was hauled off to military service with a month of filming already complete. He has since been replaced by Yang Dong Kun.

The officially released pictures of shooting so far have shown sad faces so it is likely that the movie will be a traditional Korean melodrama/love story; indeed Allkpop reports that Kim’s character moves to Jeju Island after her horse dies where she meets fellow jockey and love-interest Yang. Nevertheless, like Gak-seol-tang before it, the movie looks set to introduce racing to a wider audience and its release is eagerly awaited.