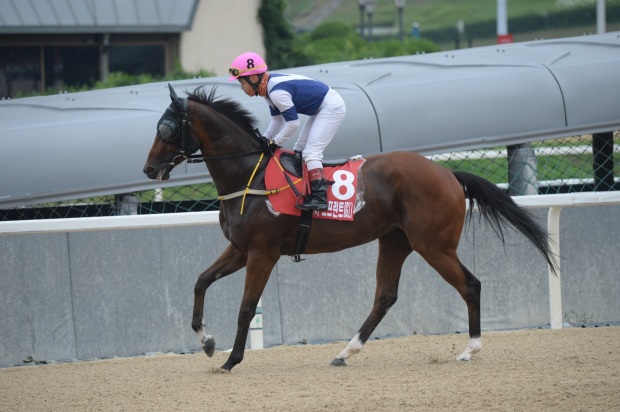 Spring Back, seen here at the Korea Sprint, takes on the unfamiliar distance of 1800M todau (Pic: Ross Holburt/KRA)

Juvenile maidens to kick things off with just three of the twelve having raced before and it’s two of those who are likely to be at the top of the market. (4) RAON TAP MAN ran a very good 2nd on debut on September 8th. His stable is in good form and he’ll be well-fancied here. So will (5) HAECHAN, who despite coming 4th in his debut, was closer to the winner than Raon Tap Man and ran a faster time. Both will be on pace from the start and both are strong contenders. Among the debut-makers, (2) CHODONG ROCKET was the most impressive in trials, running a competent 2nd in a heat back in late August. (9) MEOTJIN SEUNGBU and (10) WILD WOODS also caught the eye when qualifying.

Maiden fillies. (9) STORM FORCE has been knocking on the door throughout her five starts so far, culminating in 2nd place over 1000M in august. She’s had nine weeks off since then and looks nicely in to make the breakthrough here. She’ll be hot favourite. (11) GI RO ran on nicely over 1000M last night and can have some confidence coming back up to 1300M today while (8) BAEK HAK may also improve for the slight increase in trip. (1) SINUI CHUKBOK and (7) FAMILY HOPE are others with scope to improve in what, the favourite aside, is not a strong race.

More maidens. (1) HIT THE PACE returned from seven months off to run 4th in what was admittedly a weak race on September 1st. He’ll have needed that though and should come on for it today and he has winning chances here. (2) J.S. POWER has hinted at ability over three outings so far, all of them at 1000M. He’s run through the line pleasingly enough each time and could appreciate the additional trip here. (8) TOUR DIA and (10) KHAN ACE are the only two in the field to have 2nd place finishes to their names and both can aim to place here. (5) COLORS DE LAGO best of the rest.

(3) LOVE RACE got her maiden win in March and was then off for four months. Since returning, she’s run three times with a 3rd and a pair of 4ths. She’s nicely drawn to get to the lead here and she could well win. (2) MAPAEBONG comes in off back to back 3rd place finishes, both of them at class and distance and in arguably slightly tougher company than this so he should be firmly in contention. (8) ROYAL SMARTY has three 3rd places since being promoted to this level and 3rd should be a minimum requirement here. (6) HANEUL ACE and (7) TAEPUNG EYES look best of the rest.

Imported maidens here with just three of them having raced before. All three are likely to be towards the upper end of the betting market with (4) J.S. GUNJU the likely favourite having run 4th on debut three weeks ago, coming from well off the pace after a shaky start. Expect him to be ridden much closer much earlier today. (2) OKRYONG was well back in the same race but there was nothing wrong with his time and he can improve today. (6) MOVIECUS is the only one to have raced twice and he’s done well, registering a 2nd and a 3rd and looks good for at least another in the money finish today. It therefore won’t be easy for the newcomers although Daredevil colt (1) ECHO BILL and Street Boss filly (7) THANK YOU BOSS both looked competent enough in trials.

(5) MUDO returned from five months off at the end of August to resume normal service of running 2nd, something he’s now done in three of five starts. He was only beaten less than a length though on what was his first try at this distance and while he carries top weight here, he should have enough about him to go one better today. Three of the others who go here finished behind Mudo last time. They include (1) HAMYANG SANSAM, a slightly disappointing 5th but who has run well at this distance before and who can get closer today. (3) GOD OF SOCKS has a runner-up finish to his name at this distance and should be competitive while both (4) COILRO and (10) ROYAL BOKSUNI, the latter with an eye-catching jockey booking today, are both better than recent form suggests.

(4) BAREM was 2nd on debut before winning on her second start back in June. She’s been off since then but the Flat Out filly returns here looking nicely in for another victory. She’ll be on pace from the start along with main rival (1) BLUE FIRE. He’s yet to win in fourteen starts but has no fewer than seven runner-up finishes to his name along with three 3rds. He’ll be close at hand but may have to settle for 2nd again. (7) RAON PRO SENSE ran 2nd to the highly thought of Taktuein over 1200M three weeks ago and can go well again while (2) MY SISTER NINA and (8) FOREVER WINNER can also aim for places.

He didn’t make it to the Classics this year but (2) RAYMOND has been showing he’s got talent across the summer with three wins from his last four starts dating back to April. His latest was a three-length score over this distance in August and while up in class today, he can continue his good run over the new distance of 1600M. (1) DANCING BLADE is a winner of four from eleven and returns from five months out having looked sharp in a trial. She may suit this new distance. (5) MAMBO KHAN is consistently close and should be knocking on the door once more. (4) SPEED CHEONGNYONG and (7) WONDERFUL TRUTH are others in contention.

After running 5th on debut in May, (12) HUSH DAEBO has gone on to win three in a row since and he beat a couple of these over 1400M last start. He steps up to 1700M for the first time today and also carries more weight than last time. He should be able to overcome both though and can win again. Carrying even more is (1) MYEONGJIN MAN , who managed to snap a sequence of near-misses by returning to the winner’s circle over class and distance last start. He’ll come from off the pace and is a big danger. (10) BULHUUI MYEONGGOG is rarely too far away and while he may not win this, he can place. That’s true too for (7) THE GUMPU and (11) DONGBANG JJIJON, both of whom were beaten by Hush Daebo last start.

(8) SPRING BACK is the class horse in this race, but he is a sprinter, even managing 4th in the Korea Sprint last start so his entry here is a head-scratcher. If he stays, he’ll be a big danger and even if it doesn’t suit, his quality may see him to a place. At the distance (5) TOSCONOVA CAT is the pick. He was a class and distance winner on September 1st and with only 1kg extra to carry today, is the one to beat again. (3) SAMSEONG BULPAE was 2nd in that race, his second consecutive runner-up finish and he’ll be a threat again while (11) MORFHIS is quietly developing into a very solid class 1 runner and shouldn’t be far away either. (12) CHEONGDAM JEWANG is another capable type in what is a very competitive race.

(2) THANK YOU CHARLIE beat three of these on his way to 2nd place at class and distance on August 31st. He has won a similar race to this before and from gate 2 should be on pace from the start and can return to the winner’s circle today. (3) COMPLETE SWEEP also comes in following a class and distance 2nd on his latest start. It was a fast time in a good race, and he carries a nice light weight here. (7) GEUMA RAPID returned from nine months off in July to run a useful 4th. He’s been off a further eleven weeks since but when right is capable of going very well. (1) HEUNG BARAM and (10) PRIMA QUEEN are others in at least the placing hunt.