Headlining this weekend’s racing will be the 2nd legs of the Juvenile Series Championships to be held at both Seoul and Busan on Sunday. It’s Busan that gets racing underway though with 11 races on Friday from 11:30 to 18:00. Here are the previews: 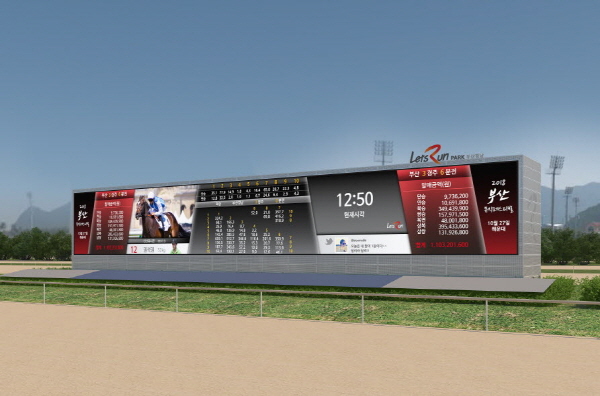 We got a new TV at Busan – this is a poor photoshop version of it….

Juvenile maidens to begin with. (3) JEONSEOLUI PUNCH ran an improved 3rd on what was his second start just two weeks ago and recorded a time significantly faster than his opponents here. He’ll be on pace from the start and is favoured to make the breakthrough.  A few of the others also look to be heading in the right direction following promising runs second-up. (10) ADELE SPIKE also ran a good third when dropped back to this trip after weakening over 1200M on debut, while (1) QUEEN OF THE QUEEN defied three-figure odds to come a useful 4th back at the end of last month. (12) FAMILY DANCER too showed significant progress last start and can build on it today. There are five first-timers and of them, (7) SPICE CANDY looks the pick over (4) EAGLE STAR.

Juvenile maidens again but this time they’re all fillies. Following a couple of promising trials, (1) CHOEGANG TOUCH was relatively well-backed on debut on September 27th and duly beat a couple of these on her way to 3rd place. She won’t need to improve much off that run to win again today. (8) NANSAN YEOJE was a disappointing 9th in the same race. She previously ran 2nd behind the very promising Dongteuja Day and should get much closer today. (6) MILE QUEEN ran an unexpected 4th on her debut in sloppy conditions while (4) BEAUTIFUL KOREA and (5) MAX POWER both put in reasonable performances on their respective last starts and could get close here.

Filly maidens here. One of the two debut-makers catches the eye. (7) HAPPY YOJEONG is a “full” sister to Cheongu, who won five of fifteen starts and raced at the Dubai World Cup Carnival, as well as Segi Gangja, who continues to run well at Busan. She was only average in her trial, but a top jockey has been engaged and she couldn’t get a weaker race to start her career in. (3) SECRET LEGACY registered a best of 4th in five starts between October last year and March this. She’s been off since but looked a much better prospect when requalifying and winning a trial two weeks ago and goes straight into contention here. (4) THUNDER VEGAS wasn’t too far off 2nd in a tight race last time and shapes to be in the mix here. (6) PEREFCT ANGEL and (8) MAGIC STEALTH look best of the rest.

(3) CHEONNYEONUI GIL and (4) FLYING KINGS came home 2nd and 3rd when they raced each other on what was for the former, a debut, back on September 20th. Both look nicely in here and can go well again. The one they’ll need to beat though is (2) ADELE CLASSIC, a solid 4th on debut over 1000M last month. The additional trip today should be in his favour and he can get closer here. It’s a similar story for (11) TOUCH STAR MAN from top trainer Kim Young-kwan’s stable. He debuted two weeks ago and should be better for the run. She’s out of Oaks winner Useung Touch. There are three debut-makers, all of whom did well in trials. Thomas Gillespie’s (9) JEONSEOLUI FIGHT perhaps has the best chance of making an immediate impact.

(9) SHINING EYE has shown improvement across three starts so far, culminating in 3rd place last start on her first try at this distance. She can overcome the wide draw here and can win. (5) SEOBU GENTLEMAN showed significant improvement to run 2nd at this distance earlier this month and should be in the hunt here although (2) PARTY LION has also demonstrated ability with some solid finishes so far and should be involved too. (1) ARA MYUNGMA was a slightly disappointing 6th lats start but can be given another chance here. (6) BARAMUI YEOSIN should be on pace from the start with the only question being how long she can hold on for.

(1) CHEONNYEONUIHUIMA was just beaten a head over 1300M last start, running on well. Although previous attempts at a mile haven’t gone especially well, she looks ready for another crack and has an excellent chance here. (4) TOP FIRE showed promise in her first two outings and while she had a poor day at the office last time, can be given another chance today on what will be her first try at this distance. Those two look head and shoulders above the rest although (6) JANGGUNEUI JILJU did beat a couple of these on her way to an unlikely 3rd place last time and could pull off a repeat. (3) SUN MOUNTAIN, behind her that day, looks more likely to overturn that form though.

(6) MAN OF THE MATCH has won three of nine so far and comfortably defeated a couple of these on his way to a three-length score at class and distance on September 27th. He does carry an additional 3kg today but still looks very much the one to beat. (8) MGIC FLYING and (5) DOCTOR WEEK came home in 3rd and 4th in that race with just over a length separating them. They have plenty of find on Man Of The Match but should be competing for the places at least. (2) GANGHAN NAMJA, racing for the sixtieth time today END_OF_DOCUMENT_TOKEN_TO_BE_REPLACED