September’s Keeneland Korea Cup and Sprint resulted in home wins for the very first time. While Sprint winner Blue Chipper seems set to make his next start in the USA, this Sunday at Seoul Racecourse, Cup winner Moonhak Chief headlines what is in effect, a re-match of the big race against domestic rivals Cheongdam Dokki and Dolkong, over 2000M in the KRA Cup Classic (KOR G2). There are 11 races at Seoul on Sunday from 10:45 to 18:00 and 6 at Busan from 12:40 to 17:10. Race-by-race is below with horse by horse for the Cup Classic. Busan selections at the bottom: 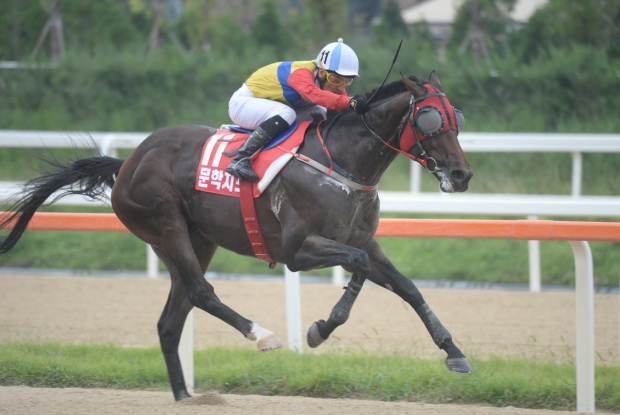 Juvenile filly maiden to kick things off with precisely half the field having raced before. Three of those did rather well. Both (6) DOKBO CHEONHA and (10) GEOSEN JILJU ran 2nd on their respective debuts last month, both in good times with the latter only beaten a nose. Both are likely to be on the early speed here and have serious claims. (3) QUIET ADELE ran 3rd on her debut back in August, coming from just behind the pace and running through the line well. She should have come on for the eight weeks off and should go close. Among the first-time starters, (8) STUNNING HANSEN was a trial winner at the end of August while (5) SHINY QUEEN also caught the eye in her heat. As ever with the newcomers, watch the market for additional clues.

More juvenile maidens here, this time with five of the twelve having raced before. Both (10) DYNAMIC COMING and (12) BRAVE QUEEN ran 2nd on their respective debuts, the former over 1300M and the latter over today’s distance. Despite their wide draws, both will be expected to head to the front here and both should be in the mix. (7) HWANGGEUM LUCKY was anything but lucky on his debut back in August. He had previously trialled well though so gets a chance today. It’s one of the debut-makers that they’ll need to beat tough. (2) UNCLE BELL looked extremely competent when winning a trial in a fast time – ahead of a couple of the other first-timers here – two weeks ago. He came from just behind the early pace and if he brings that kind of form to the races, he’ll be tough to beat. (4) MUNHAK TAP too won his trial and should go well first up.

More maidens and (10) MEOTJIN GEUMSEONG looks set to be hot favourite. He’s run 4th in both his starts so far, both times being defeated by very useful looking types, most recently at this distance. He hasn’t led in his races yet but expect him to be ridden forward here and he should win. (5) THE BEAST also enters with two 4ths from two starts. He steps up in trip for the first time here and is the main danger to the favourite. (8) CHOGANGGUK didn’t nothing much wrong when 5th on debut at this distance at the end of August and can build on it here. Similarly (9) J M FIGHTER has hinted ability across his two efforts so far. The more experienced (3) BAEKDU GEOPO looks best of the rest.

Fillies (and one mare) only. (2) CHEONDUNG YEOUL led gate to wire for a five-length win over 1000M on debut on September 1st. She steps up in both class and distance today but the manner of that score suggests there is more to come. She looks to be the only real early speed here and she can win again. (8) QUEEN OF CAMP remains a maiden but has finished in the top four on no fewer than nine of her eleven starts and while she may have to settle for another near miss, she shouldn’t be far away. (3) PRIME QUEEN and (6) RAON MIRACLE should both improve on their respective last starts given the slightly softer company today. (7) MASYA is another capable of going close.

(2) SAGWARANG returned from almost a year out to pick up right where she left off and won over this distance on August 10th. That was at this class and while there are perhaps a few more dangers this time around, there’s no reason why she can’t win again. (7) JEONGSANG STAR was rapidly promoted to this class following back to back wins, one a dead-heat, in July and August. She ran a useful enough 5th on her first try at this level over 1200M last month but should be better dropped back to the minimum trip today. (4) ULTRA CHAMPION returns after eight months off and looked sharp in a trial a couple of weeks ago, (11) FIRENZE HILL and the up in class (12) GEUMSEONGHWANGJE are others to take into account.

(5) CHUNGDAM HORANGI never really recovered from an early bump when well backed last start and ended up beating only two home. He’s better than that though and well worth another chance today. (10) RED SUN too had a hard time last start but steps up to this distance for the first time and can go better here. (1) ACE DONQUI and (12) GOLD LEVEL are both up in class having won at this distance on their respective latest starts. Both will need to improve significantly if they are to have a chance here though with (4) AMARONE and (11) COLORS KING perhaps more likely candidates.

(2) GEUMSEONG YEOWANG ran out a five-length winner at class and distance on August 18th and while he carries an additional 3.5kg today, still looks very much the one they’ll need to beat here. He led gate to wire that day and is well drawn to do the same. (3) GEUMA ANNUITY remains a maiden following twelve attempts but has been consistently close and should be a danger here while (7) MUNHAKUI JEONSA is a class and distance winner already and still looks to have scope for further development. (4) GREAT LEE is END_OF_DOCUMENT_TOKEN_TO_BE_REPLACED