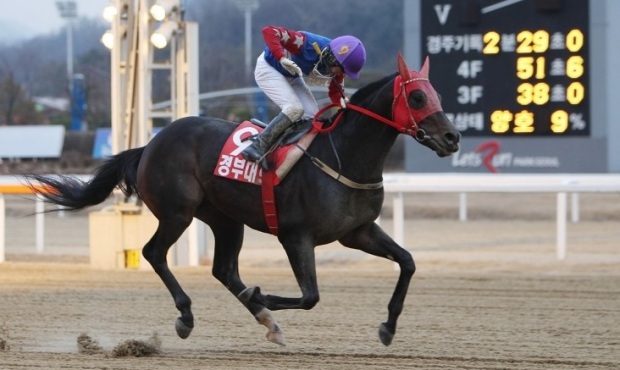 Gyeongbudaero won the President’s Cup and Grand Prix last year. Triple Nine aims to do the same this (Pic: KRA)

With that in mind, it seems likely that the Kim Young Kwan trained three-year-old will start a strong favourite to follow Indie Band and Gyeongbudaero in winning the season-ending showpiece at Seoul Racecourse on Sunday afternoon.

Favourites don’t always win though and you have to go back to 2009, when Dongbanui Gangja beat a weak field of nine rivals to win the race for the second time, to find the last market leader who triumphed in the Grand Prix.

Dongbanui Gangja was the third horse to win two Grands Prix but Gamdonguibada, winner in 2012 and a stablemate of Triple Nine, could be the one to take advantage if the favourite falters as she bids to become the fourth. Also likely to get plenty of support is the unbeaten Bold Kings. The three-year-old, trained by Peter Wolsley, has won all six of his starts to date including Busan’s trial for this race. He is far less experienced than his rivals here but has done nothing wrong so far.

Next year’s race will be held at the home track of this year’s winner. As Seoul horses generally perform dismally when the two tracks meet, there is a real fear in the capital that if the race disappears down South next year, it could be a very long time before it comes back. Clean Up Joy, Chief Red Can and Cinderella Man are the best hopes for keeping the race at Gwacheon.

As for the race itself, Gumpo Sky and Nobody Catch Me are expected to provide the early pace, Bold Kings, Cinderella Man, Triple Nine and Gamdonguibada should all be reasonably handy but plenty of the others, including Clean Up Joy, will be in no hurry at all – the last time the winner of this race led from gate to wire was 1998 and it was over 2000M then rather than today’s 2300M.

In terms of going, on Saturday at Seoul the track contained 12% moisture for an official going of “Wet” following rain earlier in the week. No rain is forecast before the race though and it should be a reasonably mild day. With the race starting at 5pm, the floodlights will be on.

The race is being simulcasted for betting in France by the PMU alongside their Hong Kong International Races coverage and in addition to the Grand Prix, European punters will also be able to bet on race 10 from Seoul – a bog-standard class 2 handicap.

It’s not every day that such thoroughbred greats as Socheonha (2 wins from 59) and Nuri Narae (1 from 26) find themselves being screened on another continent.

Nevertheless this motley set of plodders could have themselves quite a good race with almost all of them having claims in the 1200M contest. The favourites should be the pair of Raons, Raon Smart and Raon Rusa. While neither have yet scored at this level, they both look to have scope for further development. Both will probably try to lead from the gate.

The aforementioned pair of Nuri Narae and Socheonha can also compete while Taeyangbeol, making his first start since being transferred from Busan, won a barrier trial a couple of weeks ago and can go well under Lee Chan Ho. Dream Ft. and Namsan Chukje also should be considered.

The Grand Prix Stakes is race 9 at Seoul and will come under orders at 5pm. Click here for the full runner-by-runner preview. In total there are 10 races at Seoul from 10:50am to 6pm. There is also a card at Busan with 6 races from 12:45pm to 5:30pm with the feature race involving last month’s Jeju Governor’s Cup winner Queen’s Blade. She will be ridden by Masa Tanaka on what could be the Japanese jockey’s last ride in Korea.