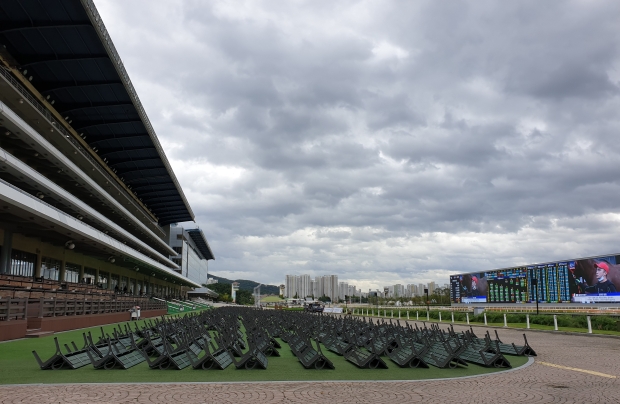 (11) POWER PRIDE overcame a bumpy start to record a career-best 3rd place on August 25th. He hasn’t shown a huge amount of speed so far, but this maiden today is one the weaker end of the scale and he may well end up making the breakthrough. (5) FLYING JUNO had a bit of a shocker last time out hanging outwards for a full two-furlongs around the turn. He had previously hinted at ability though and if he fixes his manners today, should go closer. (10) JEONGDONG SARANG will similarly need a line drawn through his latest offering and if so could be a factor. (2) MAD DIVA missed the kick on debut last month and should be better for the experience while (8) GEUMA IMPECCABLE is another with scope to improve.

(5) ANYANG JAGUAR showed a significant uptick in form when running 3rd over this distance on August 18th. She came from off the pace to run through the line well and is likely to be ridden further forward earlier today. (11) JANGGUNUI SIDAE has a 3rd and a 4th from her latest two and comes in fresh after almost three months off with solid claims to go close while another one drawn wide, (12) YAHO M J CAT has gone close at this distance before and should be in the mix here. (2) KOREA DAEJANGBU is another who has been knocking at the door without looking like winning and can aim to match the 3rd he managed last start. (7) UNHAE BEST looks best of the rest.

(2) PSYCHIC BOSS jumped awkwardly and then got hampered early on but still managed to recover and record a runner-up finish on debut on August 18th. She steps up in trip for her re-appearance today and with a clearer run, looks the one to beat in this filly-only event. (9) KOOKA CAT missed out on a maiden win by a neck last start four weeks ago. She’ll be on pace from the start and should be very close once more. (4) CLEAR STORY was a touch disappointing in 5th last time out but can be given another chance to at least place here. (8) TOUGH GREAT and (12) HWANGGEUM STAR are others who should come into the equation at some point.

Juvenile maidens here with four of the eleven racing for the first time. One of those debut-makers could well end up as favourite. (8) LEGEND STORM was an eye-catching ten-length trial winner last month in a fast time on what wasn’t an especially fast track. If he brings that kind of form to the races, he can make a winning start. (4) SIMPLE STYLE also looked handy in trials and is another who can make an immediate impact. The one the newcomers will need to beat is (9) MENI HERO. He’s run 3rd and 2nd in his two starts so far and a win doesn’t look too far away. He’ll be on pace from the start and that win could come here. (3) DAEHYEONG HOJAE and (11) P.K. HILL looks the best of the rest of the experienced ones.

(1) KINGS CARRIAGE is up in class following a six-length win over this distance on August 11th. The task is undoubtedly tougher today but from the inside gate, he can sit just off the early speed and finish strongly. (5) HWANGGEUM DOYAJI got her maiden win two END_OF_DOCUMENT_TOKEN_TO_BE_REPLACED

Racing is back in Seoul and just as it was two weekends ago, a typhoon is on it’s way! This one is expected to bring heavy rain at some stage. There are 13 races at Seoul on Saturday from 10:45 to 18:00. Here are the previews:

(4) DAEJI YEOGEOL race four times around the turn of the year with a best finish of 2nd. She’s not been seen since February but looked nice and handy when winning an August trial and she could well return with a win here. (1) NONGBUI SUCHEAHWA has a 4th and a 5th in two starts so far, coming from off the pace both times and should go close here. Those two are the clear stand outs with (5) SEOUL MAGIC, (6) MILKY SHERRY and (8) GOLD FIELD others who could make the places.

(7) WHITE COMET comes in off a 3rd and 2nd from his latest two. He led in both of those races and can do the same here, this time staying on for the win. (10) KAIZEN SILVER was slow away last start but rallied to finish 4th behind White Comet and he will be one of the main dangers today. (4) FEDERAL KING drops back in trip after a decent 5th place over 1300M a month ago and should be in the hunt as well. (12) EAGLE EYE was poor last time out and was accordingly sent back to trial. She was much better in re-qualifying and can be taken seriously here. (9) PENUMBRA stumbled at the start on her latest appearance but still ran well for 4th and can aim for a place today.

Juvenile maidens here with only two of the twelve having raced before. And one of that pair, (8) STRONG QUEEN, is going to be hot favourite. She’s actually raced twice, running 5th on debut in July before following up with 2nd, just beaten a neck, on her return on August 11th. She should be on pace from the start here and should have far too much. Of the first-timers, (10) HERITAGE looks the pick, having beaten a couple of these when trialling well last month. (7) SINDAERO and (12) WORLD BEYOND also looked useful in their respective heats.

More juvenile maidens although this time nine of the twelve have prior racing experience. (11) MASEONG TUHON has raced twice, improving to 2nd in the latest of those. The wide draw shouldn’t be a problem and he can win this. (7) GEUMA FLAWLESS ran 4th behind Maseong Tuhon on his debut on August 10th. He can build on that here and looks the likely pacesetter. (3) RAON LIGHT MAN was a solid 3rd on debut on August 17th and can aim to match that here while (9) RAON FIRST looked similarly competent when debuting himself the same weekend.

The solitary juvenile here is (11) DETERMINATION and he looks the one to beat having run a good 3rd on debut four weeks ago. He came from well off the pace that day and will perhaps be ridden a touch closer here. (7) SMART GUNHWANG has finished no worse than 4th in three starts so far, a record he should be maintaining today, while (10) HYEONGMA PUBU, who has had an interrupted career, comes in off his best finish to date, running 2nd over this distance on August 10th with a couple of his rivals here back down the track behind him. (2) SAENAE FLASH and (9) KINGLY are others with at least placing chances.

(7) MENI STAND is up in class having registered her maiden win at the fourth time of asking over this distance on August 11th. She’ll be on pace in this all-filly affair and she can win again. (4) BISANGDEUNG and (6) SOMANGUI TAP are also both up in class following their respective maiden wins with the former of the two looking the more immediately capable of making an impression at this level. (2) RAON HANNIBAL too was a last start winner and should be competitive in this company. Of those with prior experience at this level, (12) GABO PULL QUEEN, a class and distance 3rd last start, looks the best.

A full field of twelve previously unraced juvenile imports. Plenty caught the eye in trials with no fewer than six of them winning their heats. (5) J.S. GUNJU was the most eye- END_OF_DOCUMENT_TOKEN_TO_BE_REPLACED