Never write-off Kim Young-kwan. It’s the golden rule of Korean racing but some of us still fall prey to it from time-to-time. Just when it looked as though the nation’s dominant trainer could go through a season without winning one of the three-year-old Classic races, up pops Deep Mind to trounce fifteen rivals and win the Oaks by eight-lengths. At odds of 23/1.

While neither were expected to win, Deep Mind wasn’t even trainer Kim’s first-string. That was Amazon Yeogeol, but under Seo Seung-un, Deep Mind bounded out of gate 14 and got across to the lead. It was a simple plan – get in front on a very wet track and let the rest of them get in trouble in the mud and spray behind. It worked.

Dae Wan Ma, Sports Seoul Trophy winner and 2nd in the KRA Cup Mile, was sent off as the prohibitive favourite but having settled in the front half of the pack, jockey Antonio Da Silva had to get to work on her a full three-furlongs from home. The response was muted and she finished well down the field.

Instead, Deep Mind galloped away from the pack for a dominant triumph. Heung Buja got closest in 2nd place ahead of Miss Fact in 3rd making for a trifecta dividend in excess of 20,000/1. Peter Wolsley’s Top Of World was 4th and Luigi Riccardi’s Mamma Roma a creditable 5th.

For jockey Seo Seung-un it was a first win in the race but for trainer Kim it was a fifth with him previously having won four consecutive editions between 2013 and 2016. It’s also a first Classic win this season for Busan-trained horse after Seoul based gallopers Global Chukje and Wonderful Fly took out the KRA Cup Mile and Korean Derby respectively.

Deep Mind is by Menifee and is out of Urrikot (by Creek Cat), who was bred and raced in Korea. It was the seventh race of her career and her fourth win.

The 2019 Korean Oaks takes place at Busan Racecourse on Sunday afternoon and a full field of 16 runners are set to assemble for the fillies’ Classic. There are 6 races in total at Busan from 12:40 to 17:10 while at Seoul there are eleven races from 10:45 to 18:00. 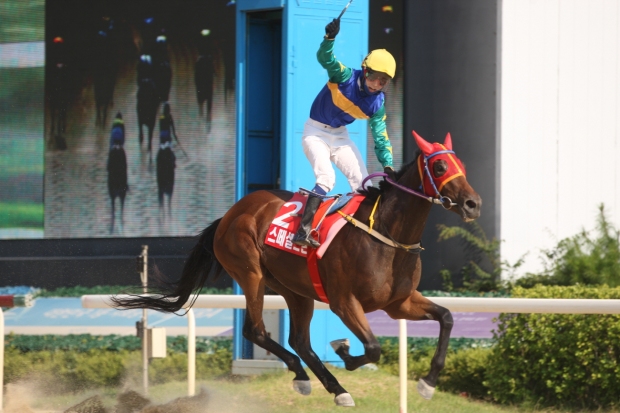 Dae Wan Ma is set to be hot favourite for the Oaks. She ran 2nd in the KRA Cup Mile having won Seoul’s Classic trial a month earlier. She’s been to Busan before when 2nd in last December’s Breeders’ Cup and she is the one to beat.

Last Sunday we saw an odds-on chance go down in the Korea Derby, however, and Dae Wan Ma is no sure thing. The beaten jockey last week was Yoo Seung-wan and he arrives in Busan with the chance to put things right on Smile Girl, winner of Seoul’s Oaks trial in April.

Peter Wolsley’s Top Of World looks firmly in the hunt as well, while Mighty Power and Amazon Yeogeol are also in contention for two trainers, Baik Kwang-yeol and Kim Young-kwan, who are in danger of having an unusually fallow Classic series. Doctor Thunder, so disappoitning in the Cup Mile, is the wildcard. Here is horse by horse for the full cards at both Seoul & Busan: