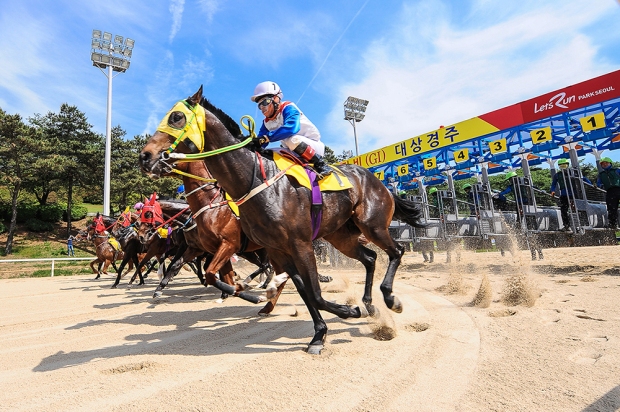 (6) SENTOSA has come by far the closest of these and looks set to start as firm favourite here. She’s the only one to hit the board so far and comes u following back to back 4th places in slightly stronger company than this. She may well lead all the way. It’s going to take a big improvement from anything else to beat her. (2) NAE GIRUI BIT has done nothing in six starts so far but did look good in an April trial so may improve while (3) HAENGBOGUI NAEIL has a 4th place to her name and should aim to beat it here. There is one debut-maker and in such a race it would be remiss not to give it a chance and (5) CHEONGSU BIG EAR put in a reasonable showing in a trial two weeks ago.

(7) ROAD HILL STORM and (2) CHEONNYEONUI BARAM came home 3rd and 5th with less than a length between them when they raced each other at this distance on April 13th. Both come in here looking ready to go close and we’ll side with Cheonnyeonui Baram to overturn that form and get his maiden win. (1) SINBU led early but weakened on her latest start five weeks ago but looked sharp in a subsequent trial and should be on pace from the start here with claims to stay on this time (8) O PI M J and (9) KKAEUCHIM are others with potential for improvement.

(6) FEDERAL CAT didn’t live up to expectations when well-backed over 1300M n March 30th. He drops back in trip today and can be given another chance with Moon Se Young retaining the mount in what is an inferior contest. (8) LUXURY POWER ran a much improved 4th in a better race than this four weeks ago and can continue to make progress here while (3) KHAN ACE and (4) DAEGUN OK also find themselves in more amenable company today then they have faced so far and can improve. There are two debut-makers and while (7) BEST WOMAN’s trial time wasn’t quick, she ran 2nd in her heat and showed that she knows what she’s supposed to do.

(1) GOLDEN ANGLE ran a close at hand 2nd on debut at this distance on April 13th having previously caught the eye in trials. He should have come on for that run and is strongly favoured to go one better today. He’ll try to come from behind an early pace that will most likely be set by (2) BAEKSANG, who significantly improved into 2nd place himself on what was his second start last month and who looks like the primary danger here. (3) JEONGJOUI KKUM should be on pace as well and drops back in distance after a decent effort at 1300M three weeks ago. Also dropping back is (10) NUNBIT EUNYAK, who was 3rd on debut at 1300 at the end of March. He’ll have to overcome the widest gate but should be a factor. There are two debut-makers and of the pair, Luigi Riccardi’s (6) DIAVOLA won a trial just last week and can go well first-up here.

(8) PLATINUM EURO was a winner on debut over 1300M on March 30th coming from just behind the early leader to run on well. He is up in class and distance here but looks to have potential for more. Despite the wide draw, he could well get a soft lead and is likely to be strong favourite here. Also up in class following a maiden win in (3) MAIN EVENT, however, it took him eighteen attempts to make his breakthrough and he likely has more to find. Instead the biggest danger may be (5) BARAM KING. A class and distance winner already, he was no better than ordinary when 6th in similar conditions last time out but can get closer today. (7) ADELEUI KKUM, with Busan-based Franco Da Silva aboard, looks best of the rest.

Small but competitive field. (5) HAPPY MAUNTAIN ran 3rd in a good race at class and distance on April 7th. He’s a runner who likes to come form off the pace and so long as he doesn’t leave himself too much to do here, he has solid claims. (4) SUN START and (2) ECHO GOLD come home 2nd and 3rd respectively when they raced each other at class and distance four weeks ago. There was half a length between them that day and they should be competing for similarly high positions today. (3) SMARTY BLUE had a hard time on what was his first try at this distance a month ago but can be given a chance to improve here.

(2) KAILLUM YEOJE ran out a class and distance winner on April 13th, coming from well off the pace to score by half a length. She was fifth in the betting market that day but despite carrying an additional 3kg this time, she can win again and given today’s draw is likely to be ridden forward much earlier. (5) OKAY TAP remains a maiden but is up in class following a 3rd and two runner-up finishes in three appearances. He should be very competitive here. (8) HUIMANG STAR and (10) FLYING JOY step down in trip after a spin around 1700M last month. Both remain maidens but both have proven capable of money finishes in races similar to this. (3) M. J. TOWN looks best of the rest.

Since getting his maiden win in January, (7) SEMYEONG GISANG has run in back to back 2nd place finishes, both at this distance and both times only narrowly beaten by decent horses. He’s not the quickest of starters but today should be his day. (5) FULL MOON OCEAN is up in class having registered her maiden win on what was her fifth start on April 14th. She was close to the pace throughout and ran on to win by five-lengths that day and should more than hold her own at this level. (6) DRAGON BOAT was 6th behind Semyeong Gisang last start and can get closer this time while (1) SARYEONI KING and (2) DAECHEON VOW are others who should be in at least the placing frame.

A winner of four from eight so far, (9) GUREUM WANGJA was a disappointing 5th when favourite at class and distance on March 31st. He didn’t get the cleanest of trips that day although there weren’t any obvious excuses. He looked much sharper when trialling up two weeks ago and gets another chance here. (11) ARGO MELODY beat Gureum Wangja by half a length in that March 31st race and can be taken seriously here while (1) KING POSE enters with recent form reading well and should be close at hand as well. (5) ICHEON SSAL finally made it bac to the winner’s circle last month. He’s up in class and back in trip here but can be competitive. (2) BAKCHAOREUM’s latest two have been in tough company and he may improve here.

(1) DIA ROAD enters with a 1000% record to defend having won his first two outings in dominant style, both at 1300M. He’s up in both class and in distance today but will be firm favourite to keep his record going. (8) BLACK ZAPPER also attempts this distance for the first time having run 3rd on his first try at this class over 1300M. That was back in January so he comes in after almost four months off, but Alan Munro takes the mount and he should go well. (3) DAESEONG RUBY has won at this distance, albeit at a lower level, and has placing claims here while (5) ELITE QUEEN and (6) MAJJABEUN SON are others who can compete for the minor money.

(4) ANOTHER SMART ONE returned to the winner’s circle when beating four of these on his way to a six-length score at this class over 1200M on March 24th. There’s an extra furlong today and Another Smart One has an additional 2.5kg to carry, but he’s drawn well again and can repeat. (2) SANGGAM MAMA is the track record holder at this distance and he too returned to winning ways last start when given a rare opportunity to carry a light weight. He carries a bit more today, but it should still be within his capability to go close. (7) BRIGHT CAT was 2nd in that race and (5) PLACES TO GO 4th and both are likely dangers, but the most interesting entrant is (11) GLOBAL LINE. He’s up in class after making all to win by six-lengths over 1800M on April 6th and while he’s been drawn fairly wide, he only carries 51kg and could be a big threat.