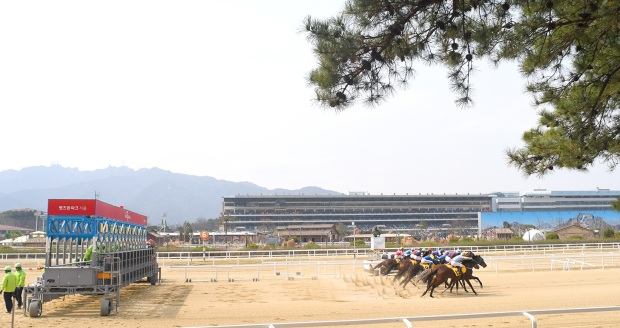 A maiden to begin with that is perhaps best described as “weak”, even for this this level. Jockey Bang Choon-sik has had something of a renaissance recently and he can pick up from where he left off before the break by winning here on (6) BLESSING ROAD. The filly has seemingly started to figure things out in her latest two and has as much chance as any of making the breakthrough here. She’ll be off to a fast start along with (7) LEADER’S CAMP who weakened last start at 1300M but should be better back at the minimum today. (1) BEST LEVEL ha put in some encouraging performances over 1200M and is another who should have a say in things. (10) GREEN TEA and (11) LUCKY RACE others who can be considered.

Another modest affair and (4) BEST HUNTER, 4th last time out at the distance and with a 3rd place to his name as well, may just about have enough to come home on top here. The five-year-old has only raced four times is never going to a star but is well drawn to lead here and can win. (12) SAEROUN CAPTAIN has raced creditably in two outings since returning from eight months off and while he must overcome the widest gate, looks a threat. (1) YONGUI JUDO and (6) GWANGPOK JUHAENG have hinted at ability and both should be in at least the placing frame while (3) BLACK GINGA is another with potential to improve.

A third maiden but it looks slightly stronger than the previous two. (1) TAEWANG SINHWA enters with a 3rd and a 4th from his latest two starts, both at this distance and he’ll be among favourites to get the win here. From the inside gate he can sit just off the early lead and finish strongly. (2) RAON GANGHO actually beat Taewang Sinhwa when the two of them finished 3rd and 4th at the distance back in June. He’s followed that up with three solid if unspectacular efforts since and is one of the primary dangers. (10) WONDERFUL EVIL beaten five-lengths by a good winner at 1000M three weeks ago. He races at further than the minimum trip for the first time and can be a factor. (7) WHITE FLOWER and (8) RAON STELLA are others who should be in the hunt.

Fillies only here. (5) LOVELY NUTE has a 3rd and a 2nd in two tries at this class since landing her maiden win in July. Last time out was her first try at this distance and while she was a beaten favourite, she can go one better today. (4) HEUNG OREUM was a good winner at this distance on August 19th on what was her third career start. She’s up in class today but can be a threat. She made all that day and will look to do the same here. (10) FLYING HERA was 2nd in that race, three-lengths back and comes up in class too While she obviously has a bit to find on the one that beat her, she should be competitive. (9) CLEAN FLOWER steps back up in trip after good recent work at 1000M including her maiden win in early July. (1) GREEN DARC was a surprisingly comfortable winner on debut on August 25th and while she’s up in both class and trip today, can be respected.

(5) MIREU STORM got his maiden win on his second start on August 19th, leading all the way at this distance. He’s up in class today but is nicely drawn to get on pace early again and can repeat. (1) ROYAL PRINCE was scarcely involved over 1300M on his latest outing at the end of August but dropped back in trip today should be much more dangerous. Simon Foster’s tiny filly (4) SKY JUMP has held her own in two efforts at this class so far and with a good start today has claims too. (3) NAEGA KKEUTPANWANG and (10) LUCKY BONGHWA, the latter a stablemate of Royal Prince and returning after precisely six months off, look the best of the rest.

Five of these raced each other at class and distance on August 25th and they managed to fill out the first five places. Winning that day was (7) ONLY BARAM, who got out in front and held on to score by half a length. He’s joint top-weight here and a repeat won’t be easy but neither can it be completely ruled out. (1) WHITE CUPID was favourite in that race and ended up coming home in 2nd place. The experienced six-year-old goes well at this distance and could well overturn the result from last time. (2) BARAM KING and (6) GOLDSTAR HILLS should also get close again. Among those who didn’t run in that race, (5) TRIPLE HAPPY and (8) DAE CAIN look to be the best.

Tricky little contest. (5) SONGAM GONGJU didn’t go especially well finishing 7th of 11 on what was her first try at this distance two weeks ago. She’s still learning though and she ran on reasonably well. She could well make the step up today and may look to lead. (2) CHANGSEONG JINJU is inconsistent but could be ready to try this trip again and may be considered. (8) DALLYEORA RAON races around two turns for the first time. He’s up in class but it could be what he needs to make the breakthrough. Also up in class is (7) CUPID GANGJA. He has raced at this distance before but perhaps has a little bit more to find. (4) SKY BIG remains a maiden after twenty-six attempts but her recent form reads well, and a place is a possibility. (9) GEOBOOGI MANSE ran 6th of 10 at class and distance last start but the margins weren’t huge, and improvement is possible here.

(9) KYE RI ran a really good 2nd at class and distance on September 9th and at the eighteenth time of asking today, the Gemologist colt could be ready to get his maiden win. He’ll run on strongly behind a pace likely to be set by main danger (4) THE KING. He’s only raced three times but was a winner on debut and has been 2nd in both his subsequent starts, including at this distance. He still looks to have scope for further improvement and has every chance here. (1) GEUM NOA and (5) GWANAK HAMSEONG both come in having run 2nd in their respective latest outings, both at class and distance and both can have designs on a repeat here. (12) ECHO GOLD looks best of the rest.

Another very competitive looking race but (7) WOOSEORA ICHEON is the one who is slightly favoured. A class and distance winner on July 29th, he came very close to repeating on August 25th ending up beaten just half a length in 3rd. While there is plenty of early speed in this race, he’s likely to be ridden patiently and to finish strongly. (6) FRENCH STAR has won two of four outings so far and actually beat Wooseora Icheon on the way to victory over 1300M back in April. He’s only raced once since then, running 2nd at that same distance on July 1st and resumes here after thirteen weeks off with serious claims. (5) GEUMA THUNDER has a 5th and a 4th in two outings so far at this level and can get even closer today. (4) THUNDER GREAT is up in class after a win and two runner-up finishes from his latest three and should be in the mix too. (8) MONDAY MONEY is rarely far away and while one or two will probably be too quick, should make at least the minor money again.

A rare event for maiden juvenile imports and only one of the twelve has race before. That’s (10) JIANIGA and he raced quite well, finishing 3rd of 12 over 1300M on August 19th. He was quickest out of the gate that day and at the minimum distance today surely has a chance. There are a couple of good looking first-timers though. To Honor And Serve colt (1) MUNHAK TSUNAMI looked very good in winning two trials in August and September. If he brings that form to the races, he’ll be hard to beat. (2) DARK PLAYER too won a trial in fine fashion at the end of August and should go well first up. (4) CORRE MI CABALLO and (6) FLASH JET are among a number of others who also caught the eye in their heats. As ever in a race such as this, watch the market for additional clues.

(3) HAENGUN MONEY ran 3rd in the HRI Trophy race over 1400M on international weekend three weeks ago. It was a return to form after two indifferent efforts and if she runs like that again, she has every chance of winning this. She’s not a fast starter so may need some luck in running but so long as she doesn’t leave herself too much to do, she can be the one they need to beat. (10) JANGSAN WILD is up in class having won back to back starts since being beaten by Haengun Money back in May. Those latest two wins have both been at this distance and both times he overcame a wide draw to get on the early pace. (8) BOLD SHINING also comes in having won his latest two but perhaps has a bit more to find. (6) THUNDER MARINE was beaten a nose into 2nd over 1200M on August 12th and should be close again. (9) SERA KING and (11) STAR CAT others who should be firmly in the hunt.

Another really tight looking contest. (5) CHEONGDAM JEWANG and (7) MONEY BLADE came home 2nd and 3rd at class and distance on August 18th with less than a length between them. Both are contenders here with Cheongdam Jewang marginally favoured to come out on top again. (9) BLUE EMPIRE drops back in trip after a couple of decent efforts at 1700M. The First Dude filly won over 1000M in June and this distance could well suit. We know it suits (10) MORFHIS who got three consecutive runner-up finishes at it between May and July and he can get close again. (12) HI OLD SILVER returned to make his second start almost a year after his first in August and it went extremely well as he ran out a six-length winner over 1200M. He’s up in both class and distance here but shouldn’t be ruled out.

(1) MUNHAK PRINCESS made all to run out a four-length winner at this distance on August 25th. The Wilburn filly is up in class here but looks a good prospect and she could well win again. (8) SINUI MYEONGRYEONG is a class and distance winner already having scored on August 26th, leading all the way. He carries an additional 3kg today but is a serious contender once more. (6) PRIMA QUEEN was 2nd in that race, two-and-a-half lengths back and she previously beat four of these, including Sinui Myeongryeong, on her way to 2nd place at this distance on July. She could well finish on top here. Also behind Prima Queen that day was (10) HOENG UN GOL. He has perhaps lost his way slightly and ran 4th behind (11) MUSIGNY on his latest outing a month ago, but he remains a danger.