Jo In Kwen rode his 500th career winner at Busan last weekend – he could add a dew more this weekend.

It took (4) FASHION OF MARINE a long time to get to the track having initially qualified at the beginning of last summer but when he finally made it two weeks ago, he ran well finishing 3rd at this distance having led for part of the race. He can have learned a bit from that and with some more progress today, he can win. He’ll try to lead from the gate and will be challenged by (3) GIPPEUM SARANG. She’s much more experienced and has been getting closer in her latest three starts, running 2nd to the promising Ihyen last time on June 1st and she’ll be a danger here. (1) EUTTEUM CHAMP was further back in that race but can get closer today while. There are two debut-makers and of the pair, (5) CAR TWO looked like he knew what he was doing in trials and can put in a positive showing first-up here.

Unraced two-year-olds competing for boosted prize money here and plenty of potential among them. No fewer than five won their latest trial and the most likely first-up here come from the top two stables at the track. Kim Young Kwan’s (4) GLITTER and Peter Wolsley’s (8) UNION QUEEN both looked competent and comfortably won their heats. Union Queen is likely to go to the front from the gate while Glitter will settle further back, and both should be involved in the finish here. (2) DAEJI CHAMP is also likely to be on the early speed having done the same when winning his heat in a fast time at the start of last month. (3) TOUGH GREEN and (5) WONDERFUL IJI are the other two who enter after doing everything asked of them in trials and both can have claims on some prize-money here.

(4) I’M YOUR STAR ran an improved 2nd at this distance on June 1st. He’d shown some ability prior to that but it was a break-out performance in similar strength company to today and he looks to be the one to beat. (5) HUNTER PARK beat a couple of these on his way to a 2nd place finish of his own three weeks ago over 1000M. It was just his third start and he previously ran well at 1300M. His stable is in form and he should get close. (2) WINNER CINDY is another one who looks to be figuring things out. She led for much of her latest effort at the distance a month ago only to end up in 3rd place and she can at least match that today. (7) BICHUI HAENGJIN hasn’t offered too many clues in two outings to date but ay appreciate the additional distance here. (11) HWANGJE BONSAEK weakened a little late on last time over 1300M and can get closer dropped slightly back in trip today.

(5) CHEONGDAM BLADE has a 4th and a 3rd from his two starts so far both times running on well but left with a bit too much to day. He’s up slightly in trip today and that may be what he needs to see him home on top for the first time. (1) TEXAS SIDAE has been getting closer across his five outings to date and comes in after back to back 3rd place finishes and should be aiming to at least match those here. (7) WONDERFUL STORY ran a decent 3rd at the distance three weeks ago. That was his first start since January and he can show some more progression here. (4) CHOEGANG STEALTH has been a touch one-paced over his twelve prior efforts but he s never too far away and should have the beating of plenty of these. (10) SWEEP MAN also seems to be finding some consistency and can go close.

(7) RACHEL was a class and distance winner on June 10th, making all and holding on to score by a nose. The competition today looks slightly stiffer, but a repeat isn’t impossible. (2) NURI ACHIM also come sin off the back of a victory and while he perhaps has a bit more to find, he’s not without a hope on what is a first Busan ride for apprentice jockey Jeong Hyeong Lae. (8) TAGONAN JILJU remains a maiden after seven attempts but has three 2nd places and a 3rd to his name. He was a touch disappointing in 4th last start but END_OF_DOCUMENT_TOKEN_TO_BE_REPLACED

Four of the longest-serving trainers at Seoul Racecourse officially gave up their barns last week. Ha Jae Heung, Kim Yang San, Yang Jae Cheol and Jung Ji Eun all reached the mandatory retirement age of 63 in the year leading up to June 30th. 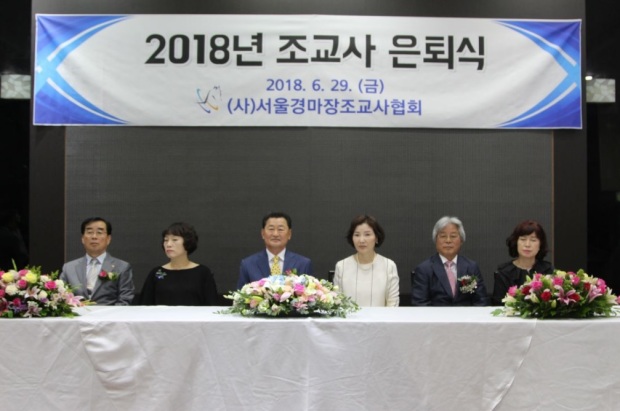 All four trainers began their careers at the Ttukseom Racecourse in Seoul, Jung receiving his license in 1982 and Ha, Kim and Yang in 1983.  At the time there was no private ownership of racehorses with all horses being owned by the racing authority so it wasn’t until the 1990s, following the relocation of the racecourse to its current site in Gwacheon that the modern racing calender, complete with Stakes races and big purses began to take shape.

Ha Jae Heung – 10535/937/1011/1042: Ha trained the winners of a number of listed races but only got the one Graded Stakes victory. It came with his best horse, Saebyeok Dongja (Fiercely), Korean Derby winner in 2005 and who would go on to 10 of his 37 outings. By far the most active of the four at the time of their retirement, he had sent out 20 winners from just over 300 starters in his final year.

Kim Yang Sun – 9088/907/912/908: Kim made his Classic breakthrough with Seonbong Taegam (Road Of War) in the Korean Oaks in 2000 and was champion trainer in 2001, a feat he would repeat in 2009. He will be most remembered though for handling one of the genuine stars of Korean Racing, Dongbanui Gangja (Broken Vow), who he prepared for back-to-back victories in the Grand Prix Stakes in 2008 and 2009.

* Also leaving the training ranks last week was Heo Jae Young. The former jockey took out a license in 2012 but the forty-year-old has now decided to pursue a different path in the industry. He trained 53 winners from 1087 starters.