Saturdays from now until the first weekend of September will be afternoon and evening meetings so Saturday racing at Seoul sees 11 races from 14:00 to 21:00. There’s little better than a few early evening refreshments under the Seoul Racecourse lights! 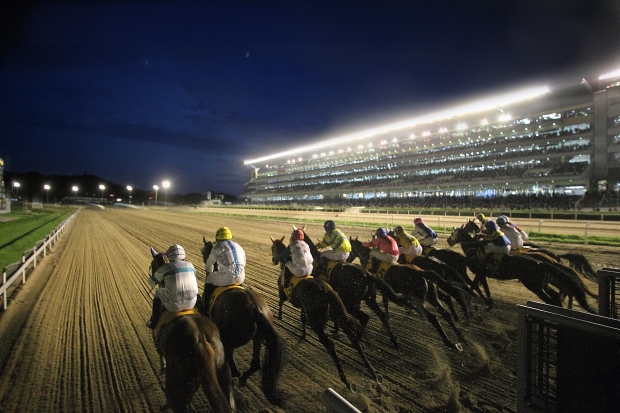 Racing under the lights!

Small field to begin and it’s a weak one at that. However, that means plenty are in the hunt. (2) SPHAERA and (6) SKY STORM look most likely to show some improvement. Both have offered glimpses of some ability across their small amount of starts so far and have a great chance to make their breakthroughs here. Sphaera is likely to get the better start and is slightly favoured. (5) EVERYTHING WIN has looked everything but a winner in her seven outings but managed 5th of 11 in a better race than this in May and can challenge here. (1) BEST BOBAE and (3) DALLYEORA SOKBO others who could improve.

(4) SURFING POINT has been knocking at the door for a while now and though she was beaten four-lengths into 2nd when favourite a month ago, she looks the one to beat in this all-filly contest. (6) CLEAN FLOWER is the main danger having beaten two of these on her way to 2nd at the distance last start and she is likely to be on pace here. The two beaten that day were (9) HALLA DAERO and (2) NEUL SAE ACHIM and both those could improve this time. (7) GOLD SEUTAK races for the nineteenth time today and while she is yet to finish in the top three, she comes in following back to back 4th places and can aim to match here.

For two-year-olds only hence the enhanced prize money. One of the eight has raced before, (2) HANEULEUL DALRIDA, who was well-backed on debut three weeks ago on the strength of a good trial performance. He only managed to finish 8th but should have come on for the run and will be expected to improve here. With that in mind, it is perhaps advisable to take trial performances with a pinch of the proverbial but (1) CLEAN UP TRIO impressed when winning his and will be backed first-up. (6) GOLD PARTY came through a slow heat but looked competent enough while both (7) KING N I and (8) WONDERFUL EVIL also both showed enough to suggest that they can be considered too.

(4) MONEY DAERYUK was a four-length winner at the distance on what was just her second start, beating Surfing Point, who we saw in race 2. She’s up in class here but should be on pace from the start and can go close. (2) YAHO STRONG CAT has raced well in each of his latest three, all of them at class and distance. He was only 5th last time but is better drawn to get on pace here and will be a threat. (1) PRIMO was well-beaten by Yaho Strong Cat in April but ran a very solid 2nd at the beginning of June and can go well again. (3) SARYEONI THUNDER and (5) DOUBLE A are others who can be considered for improvement.

(3) MIR PARK could only manage 3rd when favourite at class and distance on June 2nd, leading for much of the race but weakening late on. She looks to have more wins in her though and can go to the front again here, this time staying on. (8) STRONG MAN seemingly lost his way a little in the spring but showed signs of a return to form when an END_OF_DOCUMENT_TOKEN_TO_BE_REPLACED