For Holland it was a first Korean Stakes win. For Wolsley it was a second, but more significantly, it marked his 200th training winner in Korea.

A 4-year-old gelding, My Winner started as the favourite and under a calm ride from Holland, steadily made ground around the home turn before cruising away from the field in the final furlong and a half to record a 6-length winning margin.

Since arriving in Korea in March, Darryll Holland has been everything that the KRA’s overseas jockey program intended. Although today’s win was just his 18th overall, he has a 28% quinella strike rate achieved while riding in a manner that the local jockeys would do well to emulate. Active on social media, Holland has also helped bring Korean racing to a wider audience.

As for Peter Wolsley, his story has been told before – and you can bet your bottom Korean Won that this website is going to tell it again – but it gets no less impressive.

Wolsley is a master of preparing and entering his horses so as to get the best out of them. He does his work in the mornings and at the computer and is rarely to be seen at the track on racedays among the other trainers who mostly wish he would simply go away and leave them to their old ways. 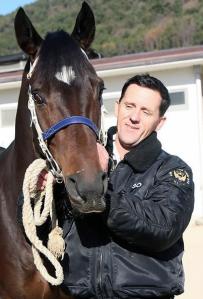 As the first foreign trainer to receive a license in Korea, he was arguably set up to fail but through talent and hard work, Peter Wolsley has become the second most sought-after trainer at Busan.

It can only be viewed as a compliment that it isn’t unknown for those owners who want their average horses to join the barn of (Busan’s top trainer) Kim Young Kwan, to send them to Wolsley to get them good enough for Kim to accept.

He is currently 2nd in the 2013 Busan Trainer Championship (Kim has already won it) and lies in 12th place in the track’s all-time list. It’s an achievement unthinkable in the days after he first arrived in Korea and was given the “breakdown barn”. Also remarkable is the fact that Busan’s best Korean jockey Jo Sung Gon, is now his retained rider.

Jo, a talented rider who needs to expand his horizons beyond the confines of Busan, is bound for foreign shores soon.

And who could possibly be better to replace him than a 41-year-old former British Champion Apprentice from Manchester?