There’s no point lamenting what wasn’t there. Instead today was about celebrating what was and Magic Dancer put in the best performance of his career to date to win the Jeju Governor’s Cup at Seoul Racecourse today.

Sent of as the odds-on favourite, it was a point-and-steer job for jockey Joe Fujii who kept Magic Dancer just off the shoulder of the early leader before taking over as they rounded the home turn. The pair then accelerated away from the field in the home straight before easing down to a 2.5 lengths win.

Chasing them home was Peter Wolsley’s My Winner, a fine performance from a gelding getting better as a 5-year-old. He was the only other one really in the race, with third placed Impetus a full 7 lengths behind.

Magic Dancer, a 4-year-old colt from the formidable Kim Young Kwan training machine has long been thought of as one of the best of his year-group, yet today was his first trip to Seoul and his first victory in a Stakes race. His overall record though moves onto 10 wins from 15 starts and, with Indie Band out of the picture, he should play a big role in the big Stakes races to come.

As for his jockey, Joe Fujii cemented his reputation as the most popular Japanese man in South Korea. Today was his 5th Korean Group race victory among 6 Stakes wins in all. He didn’t have to do a whole lot today, but as always, he got it done, wife and son joining him in the winner’s circle afterwards.

That celebration wasn’t before Fujii and Magic Dancer somehow managed to get lost on the way back to scale after they inexplicably found themselves on the inner track and had to double back all the way to the backstretch to get across and then trot back to a warm reception from punters.

So another piece of silverware disappears down the Gyeongbu Expressway. Seoul shows no sign of upping its game and the next big clash of the tracks is the Busan Metropolitan City Cup on the South Coast next month,

Gyeongbudaero held off a late challenge from an outsider to win the Busan Ilbo Cup this afternoon. 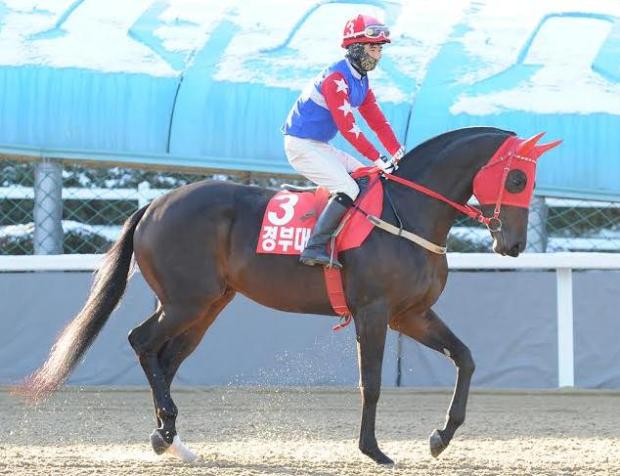 Running at his favourite distance of 1600 metres, the horse who is famous for finishing 2nd or 3rd in the big races made light of his 60kg impost to record his 3rd career Stakes win by a length from My Winner with long-shot All Su leading the rest of the field home 6 lengths adrift.

Gyeongbudaero would have a much better win rate but his connections always seek out the toughest possible opposition for him, generally running in open company rather than in races restricted to Korean bred horses.

He’s now 2 for 2 in 2014 with today’s win the 9th from 25 career starts. With Dangdae Bulpae retired, it is between him and President’s Cup winner Indie Band for the title of Busan’s number 1 horse.

It was a very strong run from My Winner in 2nd place. The Peter Wolsley trainee won a listed race last autumn which encouraged connections to take their chance in the President’s Cup. He was last that day and hadn’t run since. Better things could be on the way and he certainly won’t be allowed to start at 20/1 next time.

There was no luck for the foreign jockeys in the race. Joe Fujii, Masa Tanaka and Darryll Holland allentered with fighting chances of the win, However, riding Magic Dancer, Alpha Myeongjang and Grand Teukgeup, they finished 4th, 5th and 6th respectively.

* At Seoul, there was a little bit of an upset on the Classic trail as Cheongnyeong Bisang looked very out of sorts while finishing 7th when favourite in a class 2 handicap over the Derby distance of 1800 metres.

Last year’s Champion Juvenile started the year with a routine win over 1700 metres last month and was favourite to successfully go the extra 100 metres today but never looked like going close.

Meanwhile, it was another good day for Ikuyasu Kurakane. The Japanese rider added to his solitary win yesterday with a double today, taking him to 14 for the year already despite missing the first 6 meetings of the year due to suspension.

For Holland it was a first Korean Stakes win. For Wolsley it was a second, but more significantly, it marked his 200th training winner in Korea.

A 4-year-old gelding, My Winner started as the favourite and under a calm ride from Holland, steadily made ground around the home turn before cruising away from the field in the final furlong and a half to record a 6-length winning margin.

Since arriving in Korea in March, Darryll Holland has been everything that the KRA’s overseas jockey program intended. Although today’s win was just his 18th overall, he has a 28% quinella strike rate achieved while riding in a manner that the local jockeys would do well to emulate. Active on social media, Holland has also helped bring Korean racing to a wider audience.

As for Peter Wolsley, his story has been told before – and you can bet your bottom Korean Won that this website is going to tell it again – but it gets no less impressive.

Wolsley is a master of preparing and entering his horses so as to get the best out of them. He does his work in the mornings and at the computer and is rarely to be seen at the track on racedays among the other trainers who mostly wish he would simply go away and leave them to their old ways.

As the first foreign trainer to receive a license in Korea, he was arguably set up to fail but through talent and hard work, Peter Wolsley has become the second most sought-after trainer at Busan.

It can only be viewed as a compliment that it isn’t unknown for those owners who want their average horses to join the barn of (Busan’s top trainer) Kim Young Kwan, to send them to Wolsley to get them good enough for Kim to accept.

He is currently 2nd in the 2013 Busan Trainer Championship (Kim has already won it) and lies in 12th place in the track’s all-time list. It’s an achievement unthinkable in the days after he first arrived in Korea and was given the “breakdown barn”. Also remarkable is the fact that Busan’s best Korean jockey Jo Sung Gon, is now his retained rider.

Jo, a talented rider who needs to expand his horizons beyond the confines of Busan, is bound for foreign shores soon.

And who could possibly be better to replace him than a 41-year-old former British Champion Apprentice from Manchester?