The summer weekend evenings of decadence and debauchery are over as racing returns to its normal morning start times this weekend. 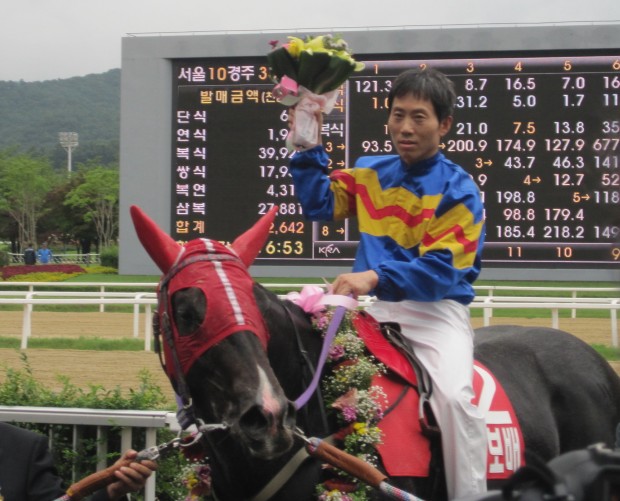 And sore heads will find plenty to lighten their wallets over in competitive cards at both Seoul and Busan, with the highlight being Seoul’s Ilgan Sports Cup on Sunday afternoon.

Gwanggyo Bisang (Menifee) has won 6 of his 7 starts to date, including the Munhwa Ilbo Cup last time out, and despite not having run since that Stakes victory back in July, is set to be favourite for the 1800 metre race, which has attracted a field of 13.

The injury-blighted K-Tap (Menifee), who was Seoul’s champion juvenile last year and was 2nd to Gwanggyo Bisang in that Munhwa Ilbo also goes, as do fellow 3-year-olds Blue Camp (Forest Camp) and Like The Sun (Forest Camp). Among the older horses they will face are Sand Jjang (Forest Camp) and Viva Cat (Creek Cat), both proven winners at this level.

Also at Seoul on Sunday, highly rated 2-year-old Canadian import Persia Wangja (Ghostzapper) seeks to get back to winning ways after being narrowly defeated by phenom Fly Top Queen last time out.

Also at Busan, as reported here, a statue to the late Mister Park will be unveiled on Sunday. On a lighter note at Seoul, top K-Pop group “Dal Shabet” will be performing.

A statue honouring the late Mister Park will be officially unveiled during racing at Busan Race Park this coming Sunday.

The Mister Park statue will have its official unveiling this weekend

Mister Park (Ecton Park) won the Grand Prix Stakes in 2010 and broke the Korean record for most consecutive victories before suffering a fatal injury in a race at Busan on June 23, 2012. 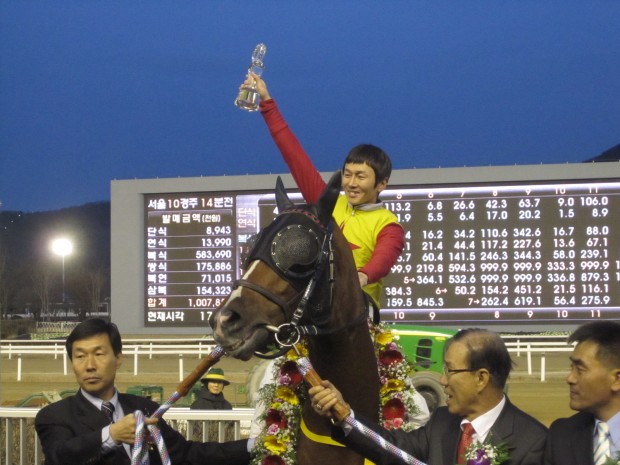 The life-size statue took five months to complete and Mister Park’s owner Kwak Jong Soo will attend to officially dedicate it to his horse. A special booklet “I’m Mister Park” has also been produced for the occasion.

Mister Park, who was 5-years-old when he passed away, ran 22 times, winning on 19 occasions. He was Korean Horse of the Year in 2011. Read more about him here.