Twelve maidens to kick us off. (2) SPEED YEOWANG registered her second career 3rd place finish last time out beating a couple of these in the process. It was a full eight-weeks ago so she comes in relatively fresh and has as good a chance as any of making the breakthrough here. (7) UN SEO was one of those beaten that day, but she ran well enough on reappearance at the end of February to suggest that she can come under consideration here. (5) GEOBOOGI MANSE and (6) HWANSANGUI BIT have both hinted at the potential to put in a good performance and can go well. The latter is likely to be on the early speed alongside (8) YOLO, who improved on his second start a month ago and can continue to make progress today.

More maidens but this time it is restricted to three-year-olds. (6) BAEKDUUI JEONGSANG enters after back to back 3rd place finishes, both at this distance, and looks the one to beat here, most likely looking to lead all the way. (9) CLEAN UP SECRET ran a good 3rd back at the beginning of January, beating Baekduui Jeongsang, and was set to be well backed when scheduled to face that one again in February. He had to be scratched as some blood was found in his nostrils prior to the race but nothing else was wrong with him and he returns here for a stable that is having its horses come into form. (1) SEONGAM JEUNE was a decent 4th on debut on February 25th, beating four of these in the process and should beat plenty again, while (2) MASYA already has a 2nd place to his name at the distance and can at least aim to match today.

(10) WOOSEORA ICHEON ran well for 2nd at class and distance on February 25th, beating a couple of these along the way. His win came at this distance too and while he will want to get on speed early and will need to overcome the wide draw, he is capable of winning this. (12) SIMCHEONG SADAL was 5th in that race, about three lengths behind Wooseora Icheon, continuing a decent run of form and he can get closer today with the wide gate less of an issue than for the favourite. Another one draw wide, (11) MALAKAS can also go better than recent finishes suggest, facing slightly softer company today than in his latest couple of starts. Three horses step up in class today, two of them, (8) BANGGEUT BANGGEUT and (9) FIRST QUEEN, following maiden wins at this distance. Of the pair, END_OF_DOCUMENT_TOKEN_TO_BE_REPLACED

Korea’s oldest professional Sportsman – except for a few veteran golfers – was back in the Winner’s Circle at Seoul Race Park today. However, in recent years, winning has been an all too rare experience for veteran jockey Kim Gui Bae. 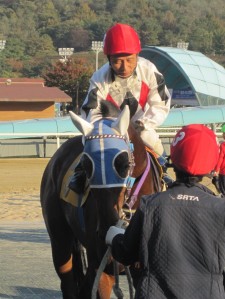 Today, partnering 23/1 outsider Haetal (Volponi) in race 8, Kim produced his horse for a late run to sweep past odds-on favourite Something Good (Forest Camp) to score victory by just over a length.

It was the 49 year old’s first win of 2012. He scored seven wins in 2011 and the same number the year before. If past history is anything to go by, he’s unlikely to exceed that figure this year; those two years were his most successful out of the past twenty.

When Kim Gui Bae turned professional as a teenager in April 1979, President Park Chung Hee was in the final year of his authoritarian regime (Park would be assassinated in October that year) and horse racing in Korea was almost a different sport to what it is today. There was no Stud Book, no private ownership of horses and the pari-mutuel odds were still calculated manually for each race.

Kim Gui Bae started his career well and, throughout the 1980’s, was one of the top jockeys at the old Seoul Racecourse at Ttukseom. His biggest win came in 1986 on Po Gyeong Seon [Danseur Etoile-Leonotis (Lionhearted)] as the great New Zealand bred gelding captured his second consecutive Grand Prix Stakes. Kim rode him to six of his twenty career victories.

On that day, the jockey can’t have imagined that twenty-five years later, he would not only still be riding, but also still searching for a second Stakes win. Kim himself points to Seoul Racecourse moving from Ttukseom to Gwacheon in 1989 as being the moment his career changed for the worse. Indeed, he’s only ridden just over fifty winners at the new track over the past 23 years.

Blurry: Korean racing photography wasn't so great back in the days when Kim Gui Bae won the 1986 Grand Prix on Po Gyeong Seon

In an interview for the KRA in 2010, Kim said he never made the adjustment from racing clockwise at Ttukseom to anti-clockwise at Gwacheon. It seems a rather incredible, not to mention disappointing, excuse but the figures certainly agree with him.

Over the years his opportunities have slowly died up as new jockeys come through. When asked why he kept going instead of making more of an effort to pass the trainers’ exam and move into the barn (something which is also likely to be too late now), he simply replied that it is because he “enjoys riding.”

Despite this, Kim Gui Bae is not a jockey that punters avoid (and there are some). He can generally be relied upon to get a horse its best possible finish and its odds don’t drift because he’s riding it. Over his career, his win rate is 8.4% and longevity has made him popular; today he was welcomed back to the winner’s circle by a small group of old-time punters.

Of the current jockeys, only Park Tae Jong, Shin Hyoung Chul and Jung Pyeong Soo also rode at Ttukseom and Kim has at least eight years on all of them. While the newest generation of jockeys are undoubtedly better, there will be those who will be sad when the familiar racing colours of these four (Korean jockeys race in their own colours) disappear from the Korean track forever.

* Yesterday at Busan, Lion Santa (Lion Heart-Santa Fe Strip) got back to winning ways after losing his unbeaten record at the end of last year. The four-year old US import took a two length win in the feature race and now has ten wins from eleven starts.

Four horses came into Sunday’s feature races at Seoul and Busan with high expectations. Only one could live up to them.

At Busan, both Dangdae Bulpae and Jeonseong Sidae found themselves on the wrong end of a blanket finish but at Seoul Ace Galloper came out with his head held high after a battling win which saw champion mare Top Point well beaten.

Dangdae Bulpae (Biwa Shinseiki) hadn’t raced since successfully defending his President’s Cup crown in November and he was sent off the slight favourite ahead of Aussie import Jeonseong Sidae (Stromberg Carlson).

As they entered the home straight it was these two who looked set to battle out the finish. However, they reckoned without a late challenge on the outside from old warrior Yeonseung Daero (Creek Cat) and, even more surprisingly, 21/1 outsider Full Forest (Full Mandate) who ultimately got the decision in a tight five-way finish.

It was a disappointing start to 2012 for Dangdae Bulpae, a horse who was undoubtedly the outstanding Korean bred competitor of last year. For Full Forest, a veteran US bred six-year-old, it was the biggest of six wins from thirty-five career starts.

Up at Seoul, KRA Cup Classic winner Ace Galloper (Chapel Royal) didn’t have things all his own way but ultimately came out on top of a very competitive handicap. Main rival Top Point (Tom Cruiser), the champion mare of 20111 disappointed but Blue Pin (Lion Heart) pushed Ace Galloper all the way to the line, the margin of victory being just a neck on the line.

Ace Galloper and Blue Pin have the kind of connection that only horse racing – for all its joys and all its heartbreaks – can give. Ace Galloper, who is now five-years old, was not an especially impressive two-year-old.

However, in his second start, on July 25, 2009, he finished second – a very distant second – to a horse called Northern Ace. They were racing over five furlongs that day and Northern Ace, a ten-length winner, broke the track record. Tragically, Northern Ace (Didyme) went on to fatally break-down during the Korean Derby in May 2010.

Northern Ace was the first Korean bred foal out of mare Telegraph Road (Royal Academy). Champion Belt, currently one of Busan’s top horses was the second. When she arrived in Korea in early 2006 though, she was in foal to Lion Heart. That foal would be called Blue Pin.

Today we salute Ace Galloper who is a truly a great champion. But we also remember Northern Ace. And all those others whose potential was cruelly taken away.

A very Happy Year Of The Dragon to all punters out there. Gyongmaman spent the break “watching football” in Thailand and generally avoiding all things racing, but things are back to normal this weekend and for the first time in 2012, we’re getting some heavyweight clashes at both Seoul and Busan. 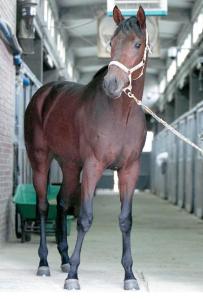 If he’d won the Grand Prix, there was a good chance he’d have been sent to the US to try his hand on the Kentucky Derby trail. Lucky for us in Korea that Smarty Moonhak (Smarty Jones) finished third and he makes his three-year-old debut in Saturday’s feature at Seoul.

In a mouth-watering main-event, he’s up against two-time Grand Prix winner Dongbanui Gangja (Broken Vow) as well as the horse who finished second in the race in 2010, Larrycat (Fantasticat).

The young Smarty Moonhak should relish the 2000 metre distance and could make full use of the four kilo weight advantage he has over the now seven-year old Dongbanui Gangja. 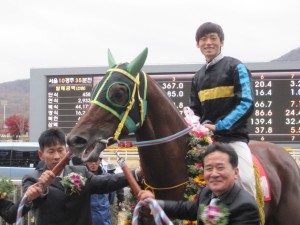 It should be a cracking race.

On Friday at Busan, Minister’s Cup winner Dongseo Jeongbeol (Vicar) looks for his second win of the year already as he heads the feature race. Winning Perfect (Doyen) and 2008 Derby winner Ebony Storm (Buster’s Daydream) will be among those looking to stop him as will be Joe Murphy’s very well-handicapped Deep Desire (Jump Start) and the in-form Bada Jewang (Social Charter).

The past few days have been some of the coldest of winter so far, however, the forecast for the weekend is bright. Temperatures should be into positive territory and the sun is set to shine. Come Racing!