Four horses came into Sunday’s feature races at Seoul and Busan with high expectations. Only one could live up to them. 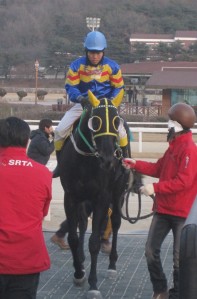 At Busan, both Dangdae Bulpae and Jeonseong Sidae found themselves on the wrong end of a blanket finish but at Seoul Ace Galloper came out with his head held high after a battling win which saw champion mare Top Point well beaten.

Dangdae Bulpae (Biwa Shinseiki) hadn’t raced since successfully defending his President’s Cup crown in November and he was sent off the slight favourite ahead of Aussie import Jeonseong Sidae (Stromberg Carlson).

As they entered the home straight it was these two who looked set to battle out the finish. However, they reckoned without a late challenge on the outside from old warrior Yeonseung Daero (Creek Cat) and, even more surprisingly, 21/1 outsider Full Forest (Full Mandate) who ultimately got the decision in a tight five-way finish.

It was a disappointing start to 2012 for Dangdae Bulpae, a horse who was undoubtedly the outstanding Korean bred competitor of last year. For Full Forest, a veteran US bred six-year-old, it was the biggest of six wins from thirty-five career starts.

Up at Seoul, KRA Cup Classic winner Ace Galloper (Chapel Royal) didn’t have things all his own way but ultimately came out on top of a very competitive handicap. Main rival Top Point (Tom Cruiser), the champion mare of 20111 disappointed but Blue Pin (Lion Heart) pushed Ace Galloper all the way to the line, the margin of victory being just a neck on the line.

Ace Galloper and Blue Pin have the kind of connection that only horse racing – for all its joys and all its heartbreaks – can give. Ace Galloper, who is now five-years old, was not an especially impressive two-year-old.

However, in his second start, on July 25, 2009, he finished second – a very distant second – to a horse called Northern Ace. They were racing over five furlongs that day and Northern Ace, a ten-length winner, broke the track record. Tragically, Northern Ace (Didyme) went on to fatally break-down during the Korean Derby in May 2010.

Northern Ace was the first Korean bred foal out of mare Telegraph Road (Royal Academy). Champion Belt, currently one of Busan’s top horses was the second. When she arrived in Korea in early 2006 though, she was in foal to Lion Heart. That foal would be called Blue Pin.

Today we salute Ace Galloper who is a truly a great champion. But we also remember Northern Ace. And all those others whose potential was cruelly taken away.