A few years ago, Korean lawmakers were asked to vote on who they respected the most in Korean history. The results were the same as an earlier poll among the general population to find who was considered the greatest Korean leader since independence.

In the greater scheme of things, polls may be meaningless but there is no doubt that the man who topped both, Kim Gu – also known by his pen-name of “Baek Beom” (“Ordinary Man”), was one of the most important Koreans of the twentieth century.

His life story and role in the fight for Korean independence is well-known. Also well-known, but less celebrated, is that when he got the opportunity, Kim Gu liked nothing better than betting on the horses.

Born in Hwanghae (now North Korea) in 1876, Kim Gu first came to prominence in 1896 for the murder – and murder it was – of a Japanese man he suspected of being involved in the Japan-ordered assassination of Korean Queen Myeongseong (better known to history as Queen Min). Kim was sentenced to death but escaped from prison and, after a short spell at a Buddhist temple, became a teacher.

In 1905, the Japanese Empire formally annexed Korea. Kim joined anti-Japanese protests and eventually became  one of the leading figures of the Independence movement, spending the next fifteen years in and out of prison. After the suppression of the March 1 Movement in 1919 and subsequent humiliation a Korean delegation suffered at the post-World War 1 Paris Peace Conference, Kim exiled himself to China. 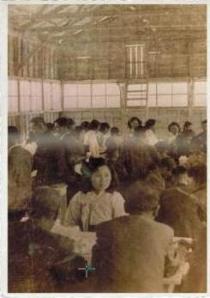 The betting hall at Sinseol-Dong Racecourse, Kim Gu would still have been in exile when this picture was taken

Joining the Korean government in exile he rose to become President of the “Provisional Government of the Republic of Korea” in 1927. This group carried out regular insurgencies against the Japanese before joining with the Allies in World War 2.

In 1945, after 26 years away from home, Kim and the rest of his group finally returned to Seoul to form the new government of a once more free Korea. Unfortunately, the country would immediately be divided into the Soviet backed North and the US backed South.

A year later, the remains of Kim’s mother, Kwak Nak Won, who died in Chongqing, were repatriated. It is said that Jockeys from Seoul Racecourse escorted her funeral procession from Seoul to her final resting place. From that moment on, “without fail”, Kim Gu, already known for his fondness for horses and racing, attended the races at Sinseol-dong every weekend.

In those few short years between independence and the outbreak of the Korea War, the racetrack at Sinseol-dong was the place to be. Kim Gu was the President, however, in reality the US Military Government ran the country up until 1948 and Archer Lerch, the third head of that government, was also often to be found at the track with his senior staff.

With them as enthusiastic punters were Kim’s Provisional government colleagues Shin Ik Hee, Speaker of the National Assembly, and most significantly, Syngman Rhee along with his Austrian wife Francesca Donner. Rhee would go on to defeat Kim in the 1948 election and rule South Korea throughout the Korean War and, increasingly despotically, up until 1960. 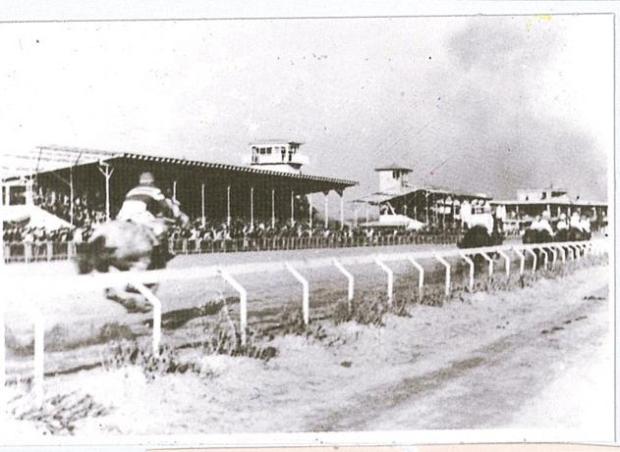 A race at Sinseol-dong in the late 1940s when Kim Gu, Syngman Rhee and Shin Ik Hee were track regulars

Kim Gu was, by all accounts, a flamboyant figure at Sinseol-dong. In his regular place in the VIP lounge on the 3rd floor and always dressed in Hanbok – the traditional flowing Korean robes – he would bark his bets at bookmakers (which even then was illegal as the tote has always had a monopoly in Korea) and then ferociously wave his betting slips over his head as the horses entered the home straight.

The racing authorities, taken somewhat by surprise at being graced with the presence of such high-profile figures, quickly arranged for some races to be renamed in honour of their illustrious patrons. Trophy races named after Syngman Rhee, Shin Ik Hee and Kim Gu were all held, right up until Sinseol-dong’s last day as Seoul Racecourse.

Kim Gu was assassinated in his office in 1949. To this day, there is speculation as to who may have been involved (the assassin himself was murdered in 1996 not long after claiming that Kim’s death had indirectly been ordered by the Rhee administration – and therefore even more indirectly by the CIA). Korea had lost one of its modern founding fathers. Less significantly, Korean horse racing had lost perhaps its greatest ever supporter.

Sinseol-dong Racecourse was destroyed during the early days of the Korean War. Syngman Rhee, who was very much a committed punter, did attend the new Ttukseom Racecourse although nowhere near as regularly as he did Sinseol-dong. His eventual successor Park Chung Hee who, just like Rhee before him, became increasingly authoritarian as his Presidencey wore on, was an occasional visitor to the track. 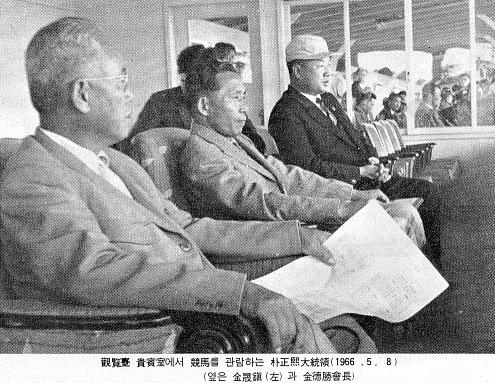 Park recognised horse-racing as very much a common working-people’s sport and therefore something he should be seen to be supporting. Indeed, he lent his title to the first running of the President’s Cup – a race which, despite undergoing several reincarnations, is still run for today.

Park was the last President to be known as a racing fan. Just like Kim Gu, Park Chung Hee also met his end at the hands of an assassin. His successor Chun Doo Hwan (another military dictator), was recorded as having toured the Ttukseom Stables one morning in the early 1980s but did not stay for the racing. Subsequent Presidents have not been seen at the track. Current President Lee Myung Bak’s signature may appear on the back page of the Korean Racing journal every weekend granting that publication the Presidential charter, but it’s the Agriculture Minister who is the only government member who is ever required to actually show up at the track.

It’s no great loss and President Lee has, however,  signed off on the new racecourse being built in Yeongcheon – close to his main power base. Apropos of nothing, the last new racecourse, Busan, was built in former President Roh Moo Hyun’s hometown of Gimhae.

Having said that, given that these days, attending the racing is not something that one will readily admit to in polite Korean society, it is worth contemplating that once upon a time, everyone who was anyone in Korea spent their Sundays on the 3rd floor at Sinseol-dong cheering their horse home.

* Kim Gu is buried in Seoul’s Hyochang Park next to a charming but crumbling soccer stadium. The small park and the museum dedicated to Kim is worth visiting if you are in Seoul. There are not many English language resources on Kim but his Wikipedia page is quite detailed. His most famous piece of writing is a passage at the end of his autobiography called “My Desire” which is reproduced in full here.

Pictures on this post are from the KRA’s archive while additional sources (Korean) are Herald Kyeongje, 1 April 2010; Chosun Ilbo June 2, 1999.

* See here for a look at what is on the site of both the Sinseol-dong and Ttukseom racecourses today.

Korea’s oldest professional Sportsman – except for a few veteran golfers – was back in the Winner’s Circle at Seoul Race Park today. However, in recent years, winning has been an all too rare experience for veteran jockey Kim Gui Bae.

Today, partnering 23/1 outsider Haetal (Volponi) in race 8, Kim produced his horse for a late run to sweep past odds-on favourite Something Good (Forest Camp) to score victory by just over a length.

It was the 49 year old’s first win of 2012. He scored seven wins in 2011 and the same number the year before. If past history is anything to go by, he’s unlikely to exceed that figure this year; those two years were his most successful out of the past twenty.

When Kim Gui Bae turned professional as a teenager in April 1979, President Park Chung Hee was in the final year of his authoritarian regime (Park would be assassinated in October that year) and horse racing in Korea was almost a different sport to what it is today. There was no Stud Book, no private ownership of horses and the pari-mutuel odds were still calculated manually for each race.

Kim Gui Bae started his career well and, throughout the 1980’s, was one of the top jockeys at the old Seoul Racecourse at Ttukseom. His biggest win came in 1986 on Po Gyeong Seon [Danseur Etoile-Leonotis (Lionhearted)] as the great New Zealand bred gelding captured his second consecutive Grand Prix Stakes. Kim rode him to six of his twenty career victories.

On that day, the jockey can’t have imagined that twenty-five years later, he would not only still be riding, but also still searching for a second Stakes win. Kim himself points to Seoul Racecourse moving from Ttukseom to Gwacheon in 1989 as being the moment his career changed for the worse. Indeed, he’s only ridden just over fifty winners at the new track over the past 23 years.

Blurry: Korean racing photography wasn't so great back in the days when Kim Gui Bae won the 1986 Grand Prix on Po Gyeong Seon

In an interview for the KRA in 2010, Kim said he never made the adjustment from racing clockwise at Ttukseom to anti-clockwise at Gwacheon. It seems a rather incredible, not to mention disappointing, excuse but the figures certainly agree with him.

Over the years his opportunities have slowly died up as new jockeys come through. When asked why he kept going instead of making more of an effort to pass the trainers’ exam and move into the barn (something which is also likely to be too late now), he simply replied that it is because he “enjoys riding.”

Despite this, Kim Gui Bae is not a jockey that punters avoid (and there are some). He can generally be relied upon to get a horse its best possible finish and its odds don’t drift because he’s riding it. Over his career, his win rate is 8.4% and longevity has made him popular; today he was welcomed back to the winner’s circle by a small group of old-time punters.

Of the current jockeys, only Park Tae Jong, Shin Hyoung Chul and Jung Pyeong Soo also rode at Ttukseom and Kim has at least eight years on all of them. While the newest generation of jockeys are undoubtedly better, there will be those who will be sad when the familiar racing colours of these four (Korean jockeys race in their own colours) disappear from the Korean track forever.

* Yesterday at Busan, Lion Santa (Lion Heart-Santa Fe Strip) got back to winning ways after losing his unbeaten record at the end of last year. The four-year old US import took a two length win in the feature race and now has ten wins from eleven starts.