It’s the Eve of the 2019 Keeneland Korea Cup & Korea Sprint and ten overseas-trained horses are at Seoul for Sunday’s big races. Saturday’s warm-up program sees 13 races scheduled from 10:45 to 18:00 including valuable trophy exchange races. There is of course the specter of Typhoon Lingling that is set to skirt the South Korean coastline not far from Seoul during the afternoon. In hope, rather than expectation, here are the previews: 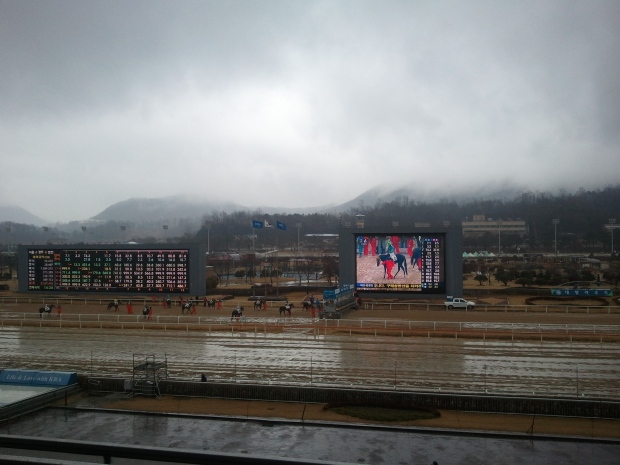 Scenes like this on Saturday would be considered a lucky outcome…

(12) BLADE STORM ran five times around the turn of the year registering a couple of 3rd place finishes in the process. He’s not been seen since March but trialled well in August and looks set to go well first up here. (9) JANGSU NABOM was an improved runner-up on what was just his second career start in July and can continue to make progress here while (11) CHOEGANG CAMP also showed some improvement when retuning five months after his debut in August. (5) J.S. POWER should be on pace early and can hold on for some money while (7) HAE SAEM CHAN looks best of the rest.

Juvenile maidens with just three of the twelve having raced before. One of those three, (2) WINNER BLUE, did rather well on debut running a good 3rd over this distance on August 10th. He’ll be expected to be on speed here and can win. The dangers are the first-timers, principally (7) GEOSEON JILJU. He was just beaten a head in a good trial a month ago with a couple of these well back down the track behind him. Top jockey on ang big chance. (6) DANAEUN SUCCESS also went well his trial, as did (11) COMPLETE CAPTAIN and (12) BAEKDUSAN CHEONJI. As ever, watch the market.

(2) OUR SIMON raced a couple of times without distinction last December and this March before finally returning to trial in August. She looked much better on her return, trialling well and will be expected to run well first-up today. (7) ARASHI and (8) GEUM NORAE were both significantly improved runners-up in their respective latest outings and both can go close here. The former ran on well after a poor start last start while Geum Norae’s improvement was attributed by his stable to his manners improving. (9) RAPIDO BOLT did nothing too wrong when 4th on debut in July and can build on it here while (10) CHEONNYEONUI GODO looks best of the rest.

(8) BISAYEON is up in class having been an eye-catching eight-length winner, making all over 1200M at the end of June. He’s had a couple of months off since and drops back in distance here but is firmly in the hunt. (1) UTGE HAEJULGE didn’t have the best of trips when running 5th last start, his first at this class, and he can be given another chance today. (11) GEUM ROYAL comes in after a useful runner-up finish at class and distance and won’t need much improvement to be in the mix here. (12) AN MOK HANG was a solid maiden winner a month ago and while up in class today, is another who should be competitive.

Eight previously unraced imported juveniles go around here. Favourite will be (3) BRAVE QUEEN, a Khozan filly who won her trial by a full ten-lengths a month ago. She’ll be expected to be on pace from the start and lead all the way. (5) CHARLIE STYLE also won his trial, albeit in slightly less emphatic fashion, beating a couple of these in the process and he looks to be the main danger. (6) SUN FO RE was 2nd on that trial, four-lengths back but looked competent enough. (4) MUNHAK KING and (7) GLOBAL ACE others who caught the eye in trials.

(2) CHOIN GANGJA will be hot favourite for this. After winning on debut, he was beaten into 2nd when favourite for his first try at this class at the end of July. While he probably wouldn’t have beaten the winner anyway, he made a bad start but ran on well and today should make no mistake. (1) TAEPUNG EYES has proven consistent at this level and should be aiming for a place while (4) MISSILE CANDY was just beaten a neck at class and distance last start and should be close again. (9) COILRO was never involved after getting crowded at the start on his latest appearance but should improve here. (11) P.K. GUNHWANG another with placing claims.

(1) SIMJANGUI GODONG ran out an impressive five-length winner of the Ilgan Sports Cup over 1800M last month having earlier this year finished 2nd in the Korean Derby. He drops back to this trip today for the first time since March, but he is very much the one to beat here. (8) RUNNING BOX has only raced three times so far, winning two of them in in eye-catching fashion. Her only defeat came on debut (to Simjangui Godong) and while she tackles this distance for the first time today, she has plenty of potential and can go close. (3) TOHAMSAN POWER enters in excellent form although perhaps has a little bit to find in this company. (2) HAE HU was a good runner-up over this distance at class 2 in July and can aim for the places again. (6) YAHO STRONG CAT and (10) CHOINMA are others to take into consideration.

It took (9) RED BLADE a few goes to figure things out completely, but he’s now won his latest three by a combined sixteen lengths as he continues his stately progression up the classes. Today will be his first crack at 1400M but there’s no reason why it won’t suit, and he’ll be very hard to beat. (3) CHOIN BOLT is a winner of three from five so far and while he only managed 3rd when favourite over 1300M on a muddy track at the end of July, he can be a danger here. (1) HEUNG BUJA was 2nd in the Korean Oaks but is a touch inconsistent. She drops back in trip today and may benefit for it. (2) GEUMA KINGDOM and (8) GANGCHONUI BYEOL are other contenders.

(9) THUNDER MARK is one of the most promising fillies in the country, and while last month’s KNN Cup proved to be a bit too much too soon but she didn’t run badly and back down in trip today she can return to the winner’s circle. (5) HWA GI beat (6) OKAY QUEEN as the pair ran 1st and 2nd over 1400M at class 2 on July 13th. Okay Queen was hampered in the straight which forced her wide and while she may not have won anyway, she may well have got closer and can overturn that form today. (1) GAON QUEEN went a touch cold earlier this summer but showed signs of a return to form with a solid run on a sloppy track last start and can go well here. (2) COVERGIRL JUSTICE is the track-record holder for 1300M and steps back in trip after a good win over 1800M a month ago. She too has solid claims.

(2) K.N BLUE had a poor day at the office last start, running 4th when favourite over 2000M at class 1 level. He’s better than that though and with Moon Se Young on board that day, he will be favoured to put things right. (9) HAVANA CHARLIE found things tough at Busan in the Owners’ Cup last start but should be much happier today, despite it being his first try at 1800M. (10) ULTRA PUNCH also tackles the distance for the first time having proved himself a capable sprinter. He looks the most obvious early leader and if he stays the trip, he can be a factor in the finish. (6) SUPER SOCKS is a class 2 winner over 1800M and should be there or thereabouts while (13) SHARK DAEJANGGEUN had a hard time in the Ilgan Sports after missing the break but should be better today.

(2) MASK ran 4th last start behind Global Captain, who takes his chance in the Korea Sprint on Sunday. His recent efforts have been at sprint distances, but he is capable of going longer as well and he looks the one to beat here, most likely from just behind the early lead. (5) JANGSAN POWER also comes in having been beaten by Global Captain last start – albeit in a different race. He moves up to try two-turns for the first time and is likely to be the pacesetter so if he gets the trip, he could well win. (4) ULTRA ROCKET is well-established as a solid class 1 campaigner and rarely puts in a bad run. He’ll be close. (3) LEONNING STROM and (8) PALPAL VICTORY are others who should be competitive.

(4) JANGSAN FLY was just beaten a nose last time (jockey dropped his stick near the furlong pole) at class and distance. His recent form is very solid and he’s favourite to return to winning ways today. (7) BULUI QUEEN got her maiden win at the ninth attempt over this distance a month ago. She is up in class today, but the manner of that victory suggests there is more to come, and she can be competitive here. (9) HAWK HAENGJINGOK ran a decent 5th on his first try at this class last time and he too looks to have more development in him (5) UDAERYUNG and (10) GOLDEN STEP are others in the hunt.

(2) MYEONGJIN FLY has a win and runner-up finish from two starts so far. Both have been fast times over 1000M and while he is up in distance for the first time today, the way he has run through the line suggests it won’t be a problem and he’ll be hot favourite here. (3) MONE FLYING could be coming back into form with a useful 3rd last start while (6) FASHION PLAYER had a bad trip and raced ungenerously on his way to 6th a month ago. With better manners today, he can get closer. (4) CHEONGANG SEONG and (7) JEMA TEUKGEUP, the latter up in class after a good win last time, are others with placing chances.