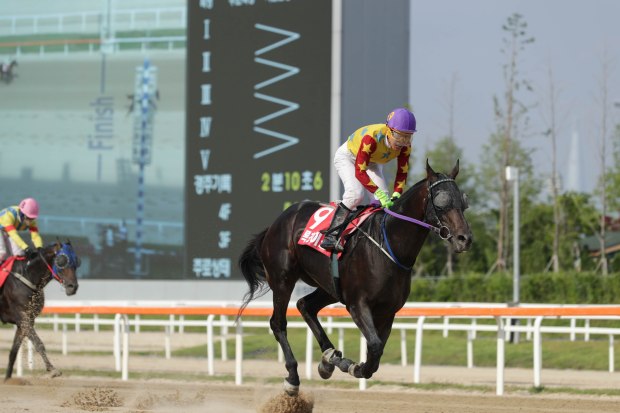 Minister’s Cup winner Rock Choice will be in action at Busan on Sunday (Pic: KRA)

(1) SEUNGNI JEONSEOL was all over the place in her first few starts but has got things together well recently and comes in having finished 2nd in her latest start on August 11th, running on well. She’s the form horse and should be registering her maiden win here. (10) GYEONGGUKJIMA has had an interrupted career but goes well on her day. She’s not got much in the way of speed but may not need to in order to go close here. She got a good 2nd two starts back and can repeat that today. As for the rest, we’re looking for something to step up. (8) MASEONG JILJU has been through three trials since he last raced and could be one. (4) HIT THE PACE, returning from six months out, could be another.

Juvenile filly maidens here with just three of the twelve having raced before. Of those three, only (11) JEONGSEONG STAR has demonstrated much in the way of ability, running 3rd – albeit ten lengths behind the winner – over 1200M on her second start at the end of July. She can aim to match that here. O the debut makers, (4) DOKBO CHEONHA is half-sister to Captain Blade, who was a precocious youngster before injury ended his career after six wins from ten starts. She won her latest trial in a fast time and is set to be favourite. (2) CHEONDUNG YEOUL is the third foal out of Korean Listed winner Cheoneun and she was similarly impressive when winning a trial, albeit on a wet-assisted track. (5) LUCKY SMILE and (7) SHINY FIRE are others who can debut well.

It’s time for (4) YULONG FLYING to make the breakthrough. He’s been knocking on the door for some time and comes in off a good 2nd on a muddy track at this distance at the end of July. He should be a cut above these. (2) ACE WIN has done nothing wrong in two starts so far and can continue to improve here while (11) WONDERFUL PANGPANG disappointed slightly last time out but looked well when winning a trial a couple of weeks ago. (1) PENUNMBRA and (8) WONDERFUL CAT, the latter starting for just the second time, are others who may challenge for the places.

Totally wide-open handicap here with lots coming in off good recent form and potentially ready to win. (9) BLACK PARTY has a 2nd and a 3rd in two starts at this level since getting her maiden win over this distance in March. She’ll look to get on pace here and can win again. (3) HANSEN BAROWS comes in having run a close 2nd over the distance on July 27th, running on well from a wide draw. Expect him to be up with the leaders earlier rom gate 3 and he has a real chance. (1) MYEONGMA JILJU was a touch disappointing when 6th on a very wet track last start but has unlucky not to win the time before at class and distance and should be close here. (2) LUCKY SOCHEON, (11) CHEON GOE SEONG and (4) LAO JIN, the latter specialising in finishing 3rd, are among several others in the hunt.

(3) MENI GRAND has a 4th and a 2nd from two starts so far at this class following back to back wins in April and May which got her rapidly promoted. She’ll be close to the pace here and can go on to win. (9) LUMINESCE comes in with similar form having also been rapidly promoted and also runs at this class for the third time. He was 2nd on his latest outing, also at this distance. He’s very much a front-runner and could prove difficult to get past. (2) DELTA K has recent form reading very positively and can continue that good run here. (1) FOREVER WINNER, who already has a class and distance score to her name, and (6) BUCKETFUL GOLD, up in class after a pair of runner-up finishes, are others in at least the placing frame in what is a competitive race.

(4) DONE IT MY is a twenty-six-race maiden but beat a couple of these on his way to 4th place over 1300M on August 4th. He’s a slow starter but has a decent finish on him and will pass horses late on. Will he pass enough, though? If he doesn’t then (2) ULSAN JANGGUN may be one that he fails to reel in. He’s a solid campaigner at this level and should be on pace from the gate here with every chance of sticking on the whole way around. (6) MAJOR PUNCH is up in class having scored her maiden win by half a length at the end of July and looks to have scope for more progress. (3) TIZ JYFUL and (12) MAJOR POWER are others who can go close in a competitive race.

(9) CALL WIN has been knocking on the door in each of his latest three, beating several of these along the way. He’s taken to this distance very nicely and today ought to be the day he makes his breakthrough. (5) YOUNG STORM also has recent good form over this distance and while he only managed 5th of 8 over 1300M last start, he should be better END_OF_DOCUMENT_TOKEN_TO_BE_REPLACED