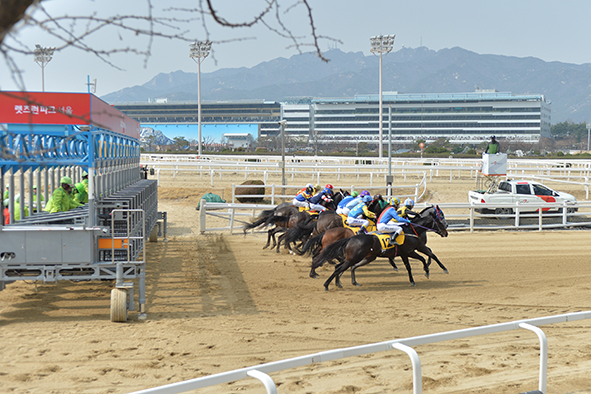 (9) AN MOK HANG was beaten when favourite on her latest start four weeks ago. That was against considerably better opposition than she faces today though and her previous runs suggest she has every chance here. (8) CHEONEUN JJANG comes in after a useful 3rd place last time out and looks to be one of the main dangers although (1) SEUNGNI JEONSEOL has also proven capable of running competitive times – she was found to have been slightly lame after her latest run and has had seven weeks off. If (10) SEOUL MAGIC can get a good start from the wide draw, he has placing claims too. There are two debut makers and of them, (4) JEONGMUN LASER put in a handy performance in his trial.

(7) MENI STAND returned from seven months out to run 3rd at thus distance on July 20th. She shifted in at the start that day and lost quite a bit of ground, only really making it up in the final furlong. If she gets a better start and gives herself more of a chance here, then she can win. (5) RAON JOY enters off the back of a pair of 3rd place finishes and can aim to match or even better those today while (1) NONGBUI SUCHEAHWA is another who had a hard time coming out of the gate on what was her debut six weeks ago but then ran on well. She should have come on for that and can improve here. (4) STORM FORCE and (12) FAMILY PARK are others in the frame.

Juvenile maidens here with only four of the twelve having raced before. One of those is set to be favourite though. (4) STRONG QUEEN was very slow to begin on debut from a wide draw but ran on very nicely to claim 5th. She’s much better drawn today and looks the one to beat. (2) WONDER PLACE debuted in the same race and while she came home 9th, Moon Se Young being aboard today will interest some. As for the other chances, it’s likely to be the first-timer starters. (8) DANGCHAN BARAM looks the best of them, having won her trial in a good time, beating a couple of these along the way. (7) RAON TOUGH MAN was also a trial winner and while his time was a little slower, can be considered first up too. (9) QUIET ADELE, 3rd in a trial behind Dangchan Baram, looks best of the rest.

After an inauspicious debut in February, (7) KINGS CARRIAGE has put in two consecutive 3rd place finishes. He should be on the early speed today and has an excellent chance of improving further and making the breakthrough. (9) DIAVOLA finished behind King’s Carriage back in June but has since picked up a 3rd place of her own over 1200M four weeks ago. She can be a big danger here. Those two look head and shoulders above the rest although (4) CHEONNYEONUI GODO has hinted at ability and may compete for a place along with (6) WONDERFUL HEELS and (12) CHOEGANG CAMP, the latter making just her second start having looked useful in recent trials.

(2) GABO PULL QUEEN missed the break by a length or so when favourite over 1200M on July 13th and while without that she may still not have won, it certainly didn’t help her as she ended up running out 4th. She has a 2nd place to her name at class and distance though and she can be expected to go much closer today. Moon Se Young rides her for the second time, with the first having been her solitary victory. (1) CAMP BADA and (5) GEUM ROYAL came home 4th and 5th behind Gabo Pull Queen back in June and both have proven competitive at this level, as has (6) PRIME QUEEN. The three of those look likely to pose the biggest potential threats to the favourite although (3) NONSTOP FLYING is another who can go close.

(4) FLYING BULLET comes in here seeking her third consecutive victory having made all in her latest two, both over this distance and the latter at this class. She does carry 4kg more than last time but has potential for another win here. (5) FEDERAL CAT and (6) BAEKSANG came home 3rd and 4th respectively with just a length between them when they raced each other over class and distance on July 13th and both should be in at least the placing hunt once again. (2) DAEHAN ILPUM was just beaten a neck mat class and distance last start and can be respected here. (1) BULUI QUEEN remains a maiden after six attempts but is rarely too far away and drops back in trip following a creditable 5th over 1700M last time.

(8) DAEGUNUI GEOM returned from three months off to just get pipped by a nose in a good race at class and distance on June 15th. He had two of these behind him that day and following another eight weeks off, he looks ready to win. (5) LIL’ PATRON was one of those he beat that day and he looks to have potential for further development. He also runs for the first time since. (1) ENDURANCE was an also-ran in the Korean Derby this year and has finished 2nd in both subsequent starts. He’s up in class today but should be on pace and is likely to aim to be on pace. (4) BULGULUI RUNNER was an improved 3rd on what was just his second start in July and he can maintain his progress here. (6) CLEAN UP HERO returned to some kind of form with a 3rd place last time and can aim for the minor money again.

After a strong of near-misses, it’s about time (2) HOPE KINGDOM made the breakthrough and actually won a race. In two goes at this trip, he’s been beaten a nose the first time and then by three-quarters of a length the second. He can sit behind the early speed here and finish strongly. (11) ROYAL SMARTY is another who has taken to this distance well having run 2rd in his first try at it on July 14th. He’ll be a danger as will (4) TO THE VICTORY, who attempts two turns for the first time but could well get a soft early lead here and if he sees out the trip, could pull off a surprise. (7) INDIAN BOSS and (9) SUN QUEEN are others in the placing frame.

(9) ALIBABA MARINE was just beaten a nose over 1200M on June 23rd, having run 3rd the time before that. He steps up to two-turns for the first time today and it could be exactly what he needs to make the breakthrough. (1) DAE BYEONHWA has plenty of experience at this distance including a very good 2nd place last time. From the inside gate, he’ll be on pace from the start and should be a danger at the business end. (2) MAENGJU has been inconsistent over eight outings so far but has ability at this distance and can be in line for a place. (5) DONGBANG JIJON and (11) SPEED YEONGUNG are others who can be taken END_OF_DOCUMENT_TOKEN_TO_BE_REPLACED