The 2019 Korean Triple Crown starts this weekend with the KRA Cup Mile at Busan on Sunday. We’ll have a full preview of the big race on Saturday but before that, the weekend’s action gets underway at Busan on Friday with 10 races from 11:30 to 18:00. Here are the previews: 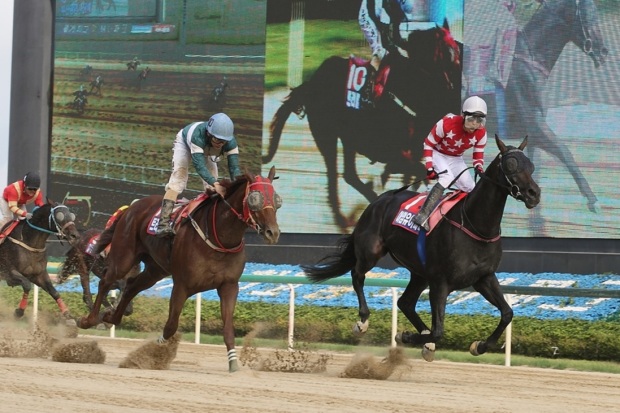 Three-year-old maidens to kick things off with seven of the twelve having raced before. Among those, (9) SMART MOD is comfortably the top pick having run 2nd on debut on March 1st. He was the beaten favourite that day after also impressing in useful company in trials but today he should make no mistake. (12) GOOD TREND didn’t do too much wrong on his first start four weeks ago and can improve on the 6th place he registered while the only one of these to have already raced more than once, (5) CHODONG RUSH offered some evidence of progress when dropped back to this trip in January and returns after three months out for a fresh start here. Of the first-timers, (2) KAHEKILI is a half sister to prolific winner Cinderella Man and trialled well. (4) ME NOVIA also went well in trials.

He’s been inconsistent across seven outings so far but (2) GOLDEN SHARP is the slight pick to prevail here. True, his best work to date has been at 1000M but a previous try at this distance yielded a 5th place finish and after a solid 3rd at the minimum last start, he looks well placed to get to the front from a good draw and go all the way. (10) DAEHO JILJU races from the first time since finishing 3rd behind Golden Sharp’s 2nd in January. It’s his first crack at the distance today and he should be close. (6) DAEHEUNG SIDAE enters off a solid enough last start 4th at this distance and can match or better today while (7) ALBERT KING and (11) RINGING FLYING, both back in trip today, should also be in at least the placing hunt.

(5) MATCH WINNER ran 3rd on debut in a useful maiden at this distance on March 8th, running on well. There could be more to come and with a bit of progress today, he looks the one to beat. (3) MAJOR POWER had two 3rd place finishes and a 4th among four outings so far. She’s not the fastest of starters but can take up a handy position here from a decent draw and should be competitive. Since returning from six months out, (9) GIMABUDAEJANG has progressively improved over three starts and steps up to this distance for the first time. He’ll be on pace and can be taken seriously. (6) SMART WINNER beat three of these on his way to an improved 3rd when stepped up to this trip on March 15th and looks set for more development. (1) ECTON SMILE was 4th in that same race and is another with at least placing chances today.

Maiden fillies here and the banker favourite of the day goes. (1) BANJIUI YOJEONG ran 2nd on debut on March 8th, running prominently throughout having previously impressed in trials. She’ll be on pace from the start and a similar performance should prove far too much for her rivals here. The main danger could be one from the same owner. (10) BANJIUI JILJU debuts here having performed strongly in trials and has every chance of going nicely first-up. Also debuting with decent claims is (6) LUCKY TOGETHER, who showed plenty of promise when trialling a month ago. Of the others who have raced before, (4) MILLION BEAT and (9) TWO TWO WAY look the best.

(4) YONGYEON is one of three of these up in class following a maiden victory last start, in his case a front-running four-length score at this distance. He’ll be on pace again and is the slight pick to repeat. (12) FINAL RULES made all for a two-length win four weeks ago (beating Banjiui Yojeongsa, who we saw in race 4). That was just her second start and she looks to have improvement in her. Similarly, (1) SINHEUNG JANGSU led from gate to wire to win by five-lengths on March 1st and while she probably has the most of the three to find, shouldn’t be far away here. Of those with prior experience of this class, (7) YAKSOKDAERO and (8) SUCHEOJAKJU are the best looking.

(8) SAMBA RHYTHM got her maiden win by six-lengths just before the New Year and then ran a solid 2nd on her first try at this class in January, both at this distance. Things
didn’t go her way when she was stepped up to a mile last time out but dropped back down today, she should be a different prospect and should be the one to beat. (7) GIPPEUM DAY was a somewhat unexpected class and distance winner on March 10th and warrants respect here while (10) HARVEST GOLD and (9) IRON WARRIOR came home 3rd and 5th respectively when they raced each other on March 8th in what was an admittedly weaker contest than this, but both can be competitive here. The wildcard is (2) GWANGHWAMUN SIDAE, who looked good when winning a trial two weeks ago.

(11) JINJJA GANGJA was just beaten a neck by promising filly Ssonsal when they raced on March 1st, his second runner-up finish. He was drawn wide that day too and can come off the pace here with claims to go one better. (4) ORANGE MARINE returned from nine months out to run a good 3rd on a wet track over 1300M four weeks ag and can build on that here, while (7) ISLE CAT has seemingly struck some form in her latest two with a 3rd and a 2nd and can paly a big role here too. (8) MAGIC STREET was a touch disappointing last time but can be given another chance while the wildcard is (2) BALLONDOR IJI. He races for the first time since last July and looked sharp when 3rd in a trial a month ago.

(11) FRIDAY is up in class having won his latest two, most recently a fine six-length score over 1300M three weeks ago. He takes his chance at a mile for the first time, but he looks a prospect and the colt, who is out of a Korean Derby winning filly, will be the one to beat here. (4) YONGWANGDAM was a class and distance winner last start and has to be taken seriously here while (2) ALPHAKING IJI will hopefully have learned from his first try at this distance a month ago and can go better today under Alan Munro, who is in town for the KRA Cup Mile on Sunday. (3) CEEYOUDOWNTHETRACK is another promising one who looks ready to try this distance again and can get close while at the other end of the experience spectrum, (8) ARION METAL ran 3rd in a similar class and distance race last month and could repeat.

(3) CALL UP THE GUARD beat four of these on his way to 3rd place at this class over 2000M on February 22nd. Since finishing 6th on debut he hasn’t been any worse than 3rd in nine subsequent outings and looks class 1 bound sooner rather than later. He can win here. It’s probably not the ones he beat that day that he needs to worry about here though. (2) HIDDDEN CHAMP and (1) HEUMUT came home 2nd and 3rd behind New Legend two weeks ago and both are contenders here. (4) DARMA steps back up in trip having won over 1200M on March 3rd and looks to be in strong contention while (8) SMART PRINCE comes up in class having won three out of his last four, the most recent of which was at this distance on March 1st. He will need to improve but carries a nice light weight and can be competitive.

Nice competitive handicap to finish off with. (7) JEONGSU SIDAE has a win and a 2nd place in two starts since returning from six months out, both at this distance and the most recent 2nd at this class. He’ll be on pace here and can win. (5) ADELEUI SIN was 3rd behind Jeongsu Sidae last time and while he has a full six-lengths to make up, can get closer this time. (8) K PLUS WON comes in having run 6th in Busan’s Classic trial last month. He’s previously registered a 3rd place at this distance and should be in at last the placing frame while (9) DAEJI CHAMP got sent back to trial after a disappointing first try at the distance last month but can be much better today. (1) DONGBANG BULPAE, who returned to form with a 2nd place over 1300M last start, is another in the hunt.