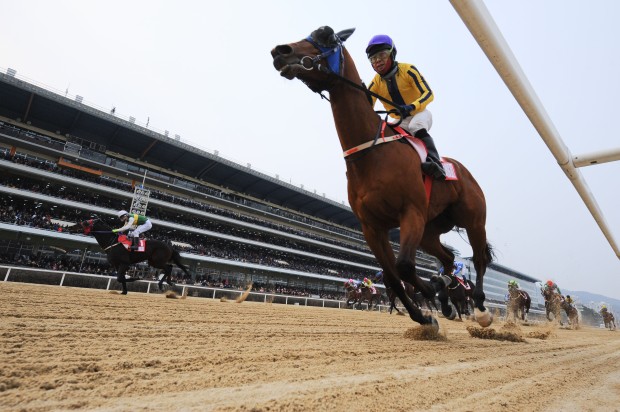 (1) MONEY SHARP has had a number of near-misses over nine starts so far and given today’s opposition, he should be making his breakthrough at last. (4) SEUNGRI LIKE had a poor day at the office behind Money Sharp last start but can be given another chance having run into trouble at the start, losing plenty of ground. The time before, he ran 2nd at this distance and with a better start today, should be on speed and can be a danger. (2) CARROT SEEKER showed some improvement last time and can be in the hunt while (5) INGRAN QUEEN and (9) SERA YEOJE are others who may improve in this company.

Three-year-old maidens and while the field is small, it’s competitive. (5) MISTER HERO hasn’t raced since a 4th place last October but trialled competently in decent company in mid-March and should go well first-up here. (4) KKAEUCHIM has shown steady improvement over his four outings and can continue his progress today while (8) STUNNING AGAIN offered some hint of ability for the first time when 6th of 11 on his latest start a month ago. However, it’s debut-makers we’ll turn to for our picks. (9) HANSEN BLADE made all to win a trial two weeks ago and a similar performance today will make him hard to beat. (7) DAEGUN POWER too impressed in a heat just last week and should be competitive here.

Another weak maiden. (4) CUPID CHOICE looks to be figuring things out having been an improved 3rd last start. She’ll be on pace here and could lead all the way. (2) WINNER SAY may have finished better than 5th on debut had she not had to be checked when improving into a narrow run coming off the turn. Nevertheless, it was an encouraging start and she can get closer here. (1) GEOM HYANG too did nothing wrong on her first appearance in February and can have also come on for it. (9) YULONG FLYING looks the type who may come good sooner or later while of the first-time starters, (5) SILVER DRAGON has the best chance of making an immediate impact.

Maiden fillies. (6) SAENAE VICTORY enters off a career-best finish of 2nd last time over this distance. She was beaten five-lengths by a decent winner, but it continued a run of encouraging performances and she could be the one to make the breakthrough here. (12) SONGAM BARBIE is the only other one in the field who has a top-three finish to her name, and she looks to be the main danger although (3) ROAD WOMAN, who races for the first time this year, looked sharp in a trial last month and can be expected to go well. (1) YAHO WHITE CAT and (8) GWACHEON GONGJU are others who can improve.

Three-year-old maidens. (3) SUHO comes in having finished 2nd over this distance on March 23rd. That was just his third career start and came after a 4th place the time before. He’s the one to beat here. (8) TAP LINE was just a head behind in 3rd place that day although he displayed poor manners in the home straight. He was 2nd on debut a month earlier and will be the main danger again. (7) P.K. GUNJU can have a line drawn through his latest one as he took a heavy bump at the start and can be given another chance here. (4) KING OF RULES and (6) STRONG VULTURE are others who can enter the placing frame.

(1) ENDURANCE was certainly eye-catching when scoring by ten-lengths over this distance to earn his maiden win on March 2nd. He was stepped up to 1700M for his first try at this class two weeks ago but after leading for much of the way around, he weakened late on and ultimately finished in 5th. Back down in trip today, he’ll be the one to beat. It was a similar story too for (3) SPEED HEUKRYONG, who after registering his maiden win in February similarly found it challenging around two turns last month and should be closer today. (2) SHADOW MONEY should break a run of four consecutive 5th place finishes – hopefully by finishing better than 5th here – while (7) BANGTANMA and END_OF_DOCUMENT_TOKEN_TO_BE_REPLACED