This evening, a Korea-owned and trained horse will line up in the starting gate for the $12 Million Dubai World Cup. This is not a sentence that was ever expected to appear on this blog. Yet that is exactly what Dolkong will do. 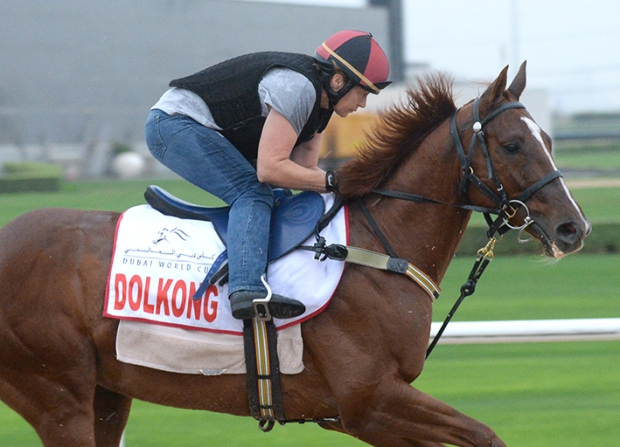 We’ll not preview the race here – others are far more qualified to do that – but naturally, it’s a hard ask. Always set to be a big outsider, following the barrier draw, which saw him receive the outside gate, Dolkong will likely start as the longest shot on the board. But that’s not important.

It’s not bad for a horse that less than four months ago finished 4th in the Grand Prix Stakes. Yet Dolkong, who matched Cheongdam Dokki when the pair were two and three, had his career stalled by injury, something that now, with less punishing miles over the Seoul sand on the clock than others of his age, may be paying dividends in Dubai, where he has thrived, coasting home in the Curlin Handicap before running 3rd in the Al Maktoum Challenge Round 3. That latter performance saw his rating tick up to 110 and this year, it was just about enough to warrant an invitation to the biggest race of all.

It has been a exceptional training performance by Simon Foster, who along with fellow expat handlers Peter Wolsley and Bart Rice, gamely and enthusiastically took on the challenge of flying the Korean flag overseas when all of their local counterparts this time opted to stay at home. Dolkong has been the example of the right horse, owned by the right owner and trained by the right trainer at exactly the right time.

If he’d have walked into a different barn when returning from injury last May, it’s possible that he’d be carrying top weight in Sunday’s class 1 handicap at Seoul. Instead he’s on one of the richest and most watched stages in world racing. Simon Foster has been an exceptional ambassador and along with others including groom and rider Lizzy Stubbington and for Dolkong’s last three runs, veteran jockey Oliver Doleuze, has forged a formidable team.

🏆 Underdog DOLKONG flies the flag for Korea but has a very international background ahead of the @DubaiWorldCup 🌏 pic.twitter.com/elYqftwopQ

Now they must go again on what is a momentous night for Korean racing (and for a small farm in Virginia). Seoul Racecourse will be open overnight on Saturday and into the small hours of Sunday and a group of racing fans are expected to gather to watch the live coverage (the race starts at 1.40am Seoul time) while a sizeable Korean contingent is out at Meydan.

After the Curlin, we convinced ourselves that it was job done and anything else was a bonus. After the Al Maktoum Challenge R3, we did the same. Now, lowest rated, widest drawn and with a closing style that doesn’t really suit most dirt races at Meydan, Dolkong is up against it again. He’ll give his best.

Final preparations over for Dolkong, here with his owner Lee Tae In and rider @LizzyStubbingt1, after the sun finally burned away the heavy fog that enveloped us all morning.@korearacing @batmanryu #DWCnotes pic.twitter.com/IURWTADuih