While Sunday will see the first Group race of the season in Korea when Cheongdam Dokki and Silver Wolf are among thirteen lining up for the G3 Seoul Owners’ Association Trophy, before that, one of last year’s Classic winners, Divide Wind, will make his return to action at Busan on Friday. There are 11 Friday races from 11:30 to 18:00. 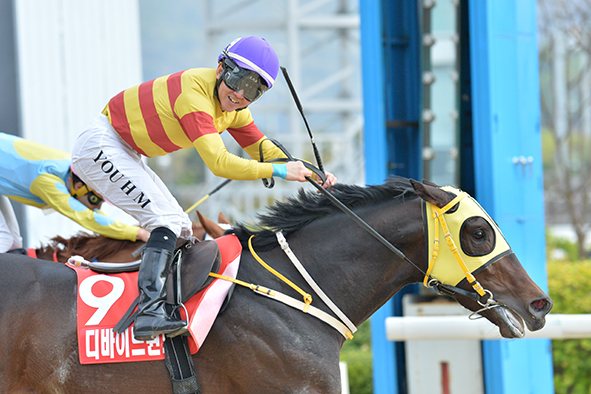 Having won the Gyeongnam Shinmun Cup last March, Divide Wind went on to claim victory in the first leg of the Triple Crown, the KRA Cup Mile in April. However, after finishing 4th to Ecton Blade in the Korean Derby in Seoul the following month, his season was over with a serious tendon injury. He came back into training around the turn of this year and has completed three official trials prior to taking his chance in race 10 on Friday, a class 2 handicap over 1400M. Here are the previews:

Maiden fillies kick us off and (10) ACE BOOM has improved across four starts so far and ran in a good 2nd place at the distance on February 15th. She won’t need to improve much to win this. (5) QUEEN OF ADELE looks the only plausible danger. She ran an improved 3rd last time out and with a good start could cause some problems for the favourite. (4) QUEEN OF HEART too looks to be figuring things out and is another who can continue to make progress here. (2) TWO TWO SIMON and (11) TOUGH KHAN should be in the placing hunt.

(4) TAMNA LIST wasn’t especially well fancied on debut on February 22nd but ran very promisingly indeed, finishing 3rd over this trip. That wasn’t a bad race at all and while she was well-beaten by the winner, with a bit of improvement, she can win here. (9) TRUE VALOR has also looked competent across two starts so far, both at this distance. He’s a half-brother of prolific winner Sart Valor and surely has a win in him before too long. (1) USEUNG JIKIMI and (6) GRAND JILJU have both hinted at ability and can challenge for places. There are two first-time starters and of them (2) PARTY LION looked the part in trials, running 3rd in a quick heat in early February. There’s a top jockey aboard and he should go very well first-up.

(3) SILVER BEST comes in off a career-best 3rd place (dead-heating) at this distance on February 15th. He came from well off the pace that day and he may need some look here but with a good trip, he can step up and win. (9) FOX COLORING never threatened and only managed to finish 6th when favourite over a mile four weeks ago. He was 2nd on his last try at this distance, albeit in weaker company than this, and he should be a threat today. (10) NEW QUEEN showed a big uptick in form last time out, running 2nd at this distance and while this is slightly stiffer, she can build on it here while the Bart Rice pair of (1) CRYSTAL ROSE and (6) FUSION PARK looks to be the others in the hunt with the latter possibly set to make the early running.

(6) HALLA HWANGHU is up in class having secured his maiden win at the fourth time of asking at this distance a month ago. He’ll be on pace here again and can follow straight up. (2) GHOST RIDER shapes to be the main danger. He’s never been worse than 4th in four starts far and actually beat Halla Hwanghu over 1000M back in December. He was 3rd behind two promising ones last time and has a chance. (9) MORNING BRAVO is yet to win but has finished no worse than 3rd in his latest five outings. He can maintain both of those records today. (3) B.K. UNO and (7) ACE CRUSH, the latter up in class following a battling win over 1000M, are others in the hunt.

(4) FRIDAY did little on debut last summer and wasn’t seen again for six months. He returned in February, a gelding, and promptly won over this distance. He’s up in class today but can be expected to have progressed and is the one they’ll need to beat here. (3) SUMMIT TODAY is next best. He didn’t do too much wrong when running 6th in similar company at this distance at the end of January and should improve for it here. (8) DAMYANG CHOEGANG is up in class off the back of consecutive runner-up finishes and can be competitive at this level. (1) TOWER CAPTAIN and (6) JAESAENGMYEONGNI look best of the rest.

Competitive race. (9) STORM GOLD gets the verdict by virtue of two runner-up finishes in two starts so far this year, both at today’s trip. He’ll want to get close to the speed from the start and if he can do that, he is the one to beat. (7) JEONGSU SIDAE is up in class END_OF_DOCUMENT_TOKEN_TO_BE_REPLACED