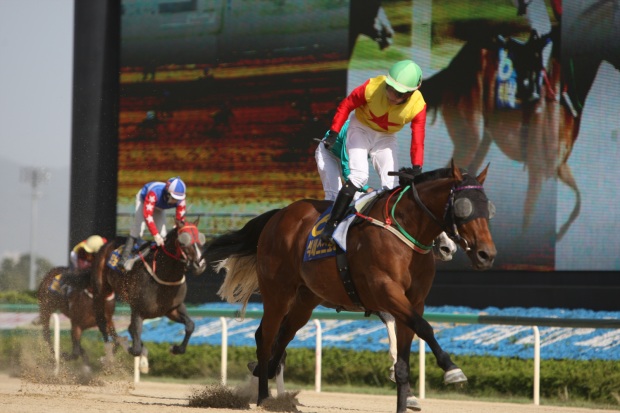 (11) RAINBOW PARK ran a decent 4th on debut on March 1st. That day’s 3rd place-getter went on to win last week and he’ll be in the frame here. There are three debt-makers and to of them look to have strong claims. (6) CHOEGANG WINNER performed credibly in a trial a month ago and has a top trainer/jockey combination but the best looking is (9) CHEONNYEONUIYAKSO, 2nd in a fast trial three weeks ago and if he reproduces that form here, he’ll probably win. (1) BARAMGWA GUREUM and (8) KKEUTPAN STORM are best of the rest.

(2) GUKMIN STAR is the most experienced in this field and also looks to be the furthest along in terms of development. He was 4th at this distance last time out but was less than a length behind the winner in a tight finish and he can come out on top today. (12) TITLE CODE ran twice last autumn and showed some promise. He’s back after almost four months off having trialled up well at the beginning of March and he’ll be in the frame. (6) BEYOND rana creditable 5th n debut in February and can build on it here. There are two debut-makers, and both look like they have promise. (9) RAON TOWN trialled up behind Title Code while (8) MUJEOK NICE looked similarly competent in her heat and has little to fear first-up.

(3) ROSE BULLET came from well off the pace to run a much-improved 3rd over 1000M three weeks ago. Once out of the kickback, he raced very nicely so with a better start today, he could well be the one to beat. (1) MORNING WANGJA has a 3rd and a 4th in two outings since returning from ten months out and can keep his momentum going here. He should join Rose Bullet on the early pace.  (7) HAPPY GATE has shown some aptitude across six starts so far, including a 3rd place at this distance and and shouldn’t be too far away. Solitary debut-maker, (5) RISING CHIEF has shown some speed across two trials and has every chance of going well first-up while the wildcard is (9) PERFECT ACE, who returns after eight months out. He offered few clues in a February trial but had talent last year and could be interesting.

(9) ROYAL TICKET has shown steady improvement over three outings to date, culminating in 2nd place when stepped up to this trip five weeks ago. He’ll probably go to the lead early here and has every chance of going one better. (12) GIDAEHAE was three-lengths back in 3rd place in that race and she can be a danger again, but the principal threat is likely to be (4) POWERFUL PUT. He too comes in off the back of 2nd place at the distance three weeks ago, his best finish in twelve outings to date, and he looks finally ready to win. (11) WANBONG, previously beaten by Royal Ticket and Gidaehae, was an improved 3rd in that race and can build on that here while (7) CHOEGANG SEONBONG ran poorly last time out but can be given another chance here.

(5) BRIAN PARK is up in class following a four-length win at this distance on March 3rd. The manner of that score suggests there could be more to come, and he looks worth taking a chance on again today. The ultra-experienced (8) VEGA KHAN ran a very close 3rd at 1800M a month ago, having led in the straight and he is to be taken seriously here as is Brian Park’s stablemate (2) DALGU, who beat three of these on his way to 4th place at class and distance just two weeks ago and similarly warrants respect. Two of those he beat that day, (4) CURLIN FANTASY and (10) I’M YOUR HOPE can be given additional chances to improve here.

This is a very competitive race with any number of possible winners. The most intriguing entry is (7) BLACK SHIELD, who races for the first time in nine months. He bowed out with a win at this distance last June and was very fast when winning a trial two weeks ago. This is eminently winnable first-up. (11) NORMAL CLASSIC is up in class having won END_OF_DOCUMENT_TOKEN_TO_BE_REPLACED