It might be Super Saturday in Dubai but at Dolkong’s home track of Seoul there is plenty going on. 12 races in fact running from 10:45 to 18:00. Highlight looks to be the clash between up and comers Havana Charlie and Speed Joy in the concluding race 12. 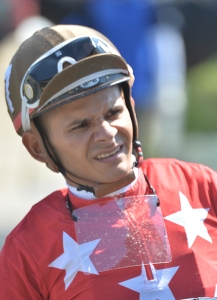 (8) MUDO was just beaten a neck at this distance at the end of January. He’s improved across all three of his starts so far and with a bit more progress here, can come out on top. (12) CHEONNYEONUI BARAM and (1) LA VIE EST BELLE came home 4th and 7th when they raced each other at this distance a month ago with both capable of going better today. (4) CENTER POLE steps up in trip following an encouraging 4th over 1000M three weeks ago and looks set for better here while (10) P.K. GUNJU ran in an encouraging 3rd on back in December and returns here up in trip but with claims.

Weak maiden here so we’re looking for something to step up. (4) STAR SOCKS is the only one of these who has manages a 2nd place finished but that was almost a year ago. She’s not run at all since last November but if she runs to her best, she’s clearly capable. (11) TONGHAP SIDAE is the only other one in the field to have a top-three finish. She’s inconsistent but generally goes ok at this distance and can be a danger. (2) GEUMA INVNCIBLE was disappointing on debut at the end of January but the jockey booking will tempt plenty. (6) SINUI CHUKBOK and (9) LUXURY POWER are others who have offered glimpses of ability. This may be a case of watching the market for clues.

After finishing 5th on debut last October, (10) NEW PARADIGM has finished 4th on three consecutive occasions in company equal or better than this and she’s favoured to make the breakthrough in this filly (and one mare) only maiden. (7) PRIMA NIKE could be the main danger, but she needs a fast start and to stay in front. Once she faced kickback last time, she withdrew co-operation but still managed to finish 4th. She trialled up well last week and can go better. (1) FLYING JUNO ran well for an improved 3rd on her second start six weeks ago and the additional distance today can suit. (4) OUR SIMON ran well for 5th on debut at this distance in December and can build on that today. (9) LOVE RACE looks best of the rest.

(2) WHITE VELVET and (6) SEUNGRI LIKE both come in having finished 2nd in their respective latest outing, both at this distance. White Velvet was the quickest – albeit on a very wet track – and with it being his second consecutive near-miss, he’s the marginally favoured of the pair today. (11) KING OF RULES ran a very solid 4th on debut at this distance just before Christmas. He’s not been seen since but returns here with a good chance of building on that start. (5) KAIZEN SILVER stepped up to this trip last time and it seemed to suit as he finished an improved 3rd. Today is a slightly stiffer race but he should be competitive again. (8) SAENAE VICTORY is another who should be in at least the placing hunt.

After getting his maiden win in fine style over 1000M in November, (8) TOHAMSAN POWER has finished 2nd and 4th in two subsequent starts at this level with the 2nd being at this distance. He should get on pace here and should have too much for this field. (6) YEOGEOL VISION is a class and distance winner and while she’s been slightly disappointing in her latest couple of outings, she can be given another chance here. (4) ROYAL PRINCE and (9) SERA KHAN too are both capable at this class and can compete for places. (11) HAEGARAM generally isn’t too far away and could also sneak a money finish.

(10) LUMINESCE got his maiden win at the third time of asking at this distance on January 26th. He’s up in class today but looks to have more improvement in him and can win again. The same is true for (9) WONDERFUL MARIA. It took her four goes to get her first win on the board, but she did it in fine style at this distance at the start of February and she’s another who shouldn’t face too many difficulties at this level. (8) GANGHWA CHONGGAK has come back into form with two solid efforts for 3rd and 4th in his latest two, beating three of these along the way last time and he’ll be in the hunt. (1) GOODCHOICE and (7) NAEGA KKEUTPANWANG are others to take into consideration.

Small but competitive field with two standouts. It took (2) DAECHEON HERO eleven races to register his first victory but the manner of it – an all the way four-length score over 1300M at this class a month ago, beating the well-thought of Dokdo Ya in the process, suggests there is more to come. He drops back in trip but can lead again and repeat. (5) GEUMSEONGHWANGJE was similarly impressive when getting his maiden win in December and ran 2nd on his first try at this class at the end of January. He looks to be improving and he’ll be a big danger. (3) CHEONROK is better than his latest two suggest and can get another chance here while (1) FINAL STORM and (6) KAILLUM YEOJE can dispute the minor placings.

(4) GOLDEN DIAL was a good class and distance winner three weeks ago and while the Dialed In colt carries an additional 4kg today, a repeat can’t be ruled out. It won’t be easy though. (5) DAEGUNUI GIL remains a maiden but has been 2nd in both his latest two albeit both times well beaten by very good winners. If he finds the right spot, he’ll win himself sooner or later and it could be here. (1) CHEONGDAM TIGER drops back in trip today and while inconsistent, should be a factor, likely from the front. (2) SEOUL SIDAE and (8) TIAGO TOUCH, the latter a really good 2nd last time at class and distance, are others who can go well.

(1) SANTOS was a close at hand 4th at class and distance on February 2nd having briefly led not far out. From the inside gate he should be on pace from the start today and he can return to the winner’s circle. (10) DONG JAK is rapidly up in class having won his latest two in fine fashion at 1300M and 1700M respectively. This is quite a big step up in competition terms but he’s nicely in and has a chance. He’ll be trying to get on the early pace too. (2) KING MESSENGER is proven at class and distance and can be dangerous while (5) RULE OF SUM is consistently close and while generally finding one or two too quick, looks good for at least a place. (9) BEST HILL slumped to her first defeat on her first try at this class last time out but shouldn’t be given up on just yet.

(8) GEUMA KINGDOM has won two of his latest three, scoring comfortably on his first try at this distance on January 27th. He’s up considerably in the weights today but should be adding to his impressive resume here. (4) GANADORA is also a class and distance winner and ran well for 4th in a slightly tougher race than this last time out. He’s a danger. (12) MALAKAS steps up to two turns for the first time and it may be what he needs after a couple of lacklustre performances over 1300M. He certainly has ability and can be closer here. (9) ROYAL BOKSUNI and (10) M. J. ROAD are others in the hunt.

(2) SAMSEONG DONGHANG was an also-rain in the Nonghyup Chairman’s Trophy last November but began his three-year-old campaign with a mightily impressive score over 1700M in January. He’s had a couple of months off since then and steps up to 1800M looking in good shape to win again, most likely leading all the way. (3) JEOKBYEOK SHINHWA is perhaps the biggest threat. He steps back up to a distance at which he’s run well at in the past and carries a very light weight. The experienced (7) CHEONHAENG was a 33/1 winner at class and distance last time and warrants more respect today. (6) HAEORABI and (10) DONGBANGUI GIEOK are others capable of going close.

(11) HAVANA CHARLIE rounded out his juvenile campaign with 2nd place in the Nonghyup Chairman’s Trophy last November and then kicked off this season with a very nice – and very fast – win over this distance on February 3rd. He’s up in class today but he looks to be going places and he should win. The danger is (10) SPEED JOY. He’s two for two, both at 1200M, since retuning from six months off in December and has already won at this distance too. He’ll finish strongly and has the best chance of beating the favourite. (1) LION ROCK makes a welcome drop back in trip. His stable has been in really good form recently and he should run well here. (5) CALLIOPE and (12) CONSERVATIVE are others who could aim for the minor placings.