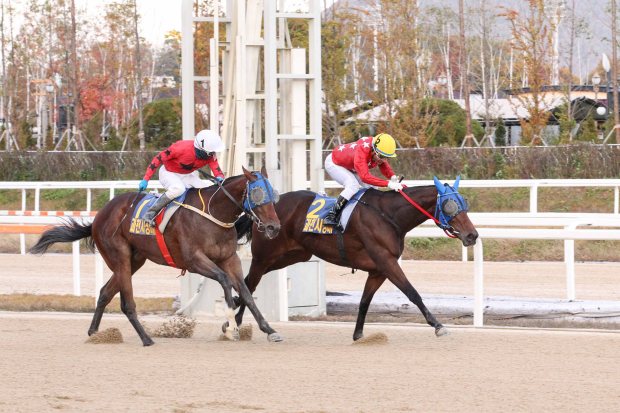 Maiden fillies to kick things up with five debut-makers and the other seven having raced once apiece. Of the experienced ones, only (1) NONSTOP FLYING emerged from her debut with much credit, leading before ultimately finishing 5th of 12 over this distance on December 15th. She should go all the way this time.  There’s not much to say about the others who have raced except that (6) ALL MY QUEEN probably has the best chance of improving at this stage. The first-timers are likely to provide the most credible challenges. (5) QUEEN STREET went through two trials and improved in the latter though it was in November. Jockey booking is encouraging. (3) BEST BUDDY and (11) JAENEUNG CHUNGMAN didn’t exactly pull up trees but looked to have some potential ability.

Three-year-old maiden fillies here. (11) M.J. TOWN has been getting closer and was less than a length away when 2nd in a good race at this distance on December 15th. She comes from behind anyway so the wide draw shouldn’t be an issue and she can go one better this time. (12) GEOM HONG was 3rd in that same race, just half a length further in-arrears. She’s finished no worse than 4th in three efforts to date and should continue that record today. (2) GAL IP also comes in off the back of two consecutive 3rd place finishes and will be a threat here while (7) DIA STORM ran a useful 3rd herself on debut over 1000M a month ago and can benefit from the additional trip. (8) HAMYANG SANSAM another promising one in a decent looking race.

Weak stuff here to the extent that while (2) K ZONE didn’t go especially well last time finishing 6th in a race that was marginally stronger than this one, but he showed enough in his prior two outings to suggest he has a win in him. He can settle just behind the early lead and today could be his day. That pace is likely to be set by (6) BLACK POKKYEOKGI, a much improved 4th last time out – and very close to 2nd – and who steps up in trip for the first time with claims to go even better. (7) EVERYTHING WIN has done almost everything except win in twelve attempts so far. He probably won’t win this either, but he can go close. (4) SUPER CREED and (12) KAIZEN SILVER are others in the hunt.

(10) LUMINESCE has finished 3rd in both his races so far, both at this distance. He’s a front-runner and if he can overcome the wide draw, he can make it third time lucky and win today. (2) MUDO was 5th in that race on what was his second outing. He ran extremely greenly though and if he can fix his manners today, he should be closer. (5) COLORFUL JOY started dreadfully before making up a lot of ground in the closing stages on debut last month. Over 1000M, he simply ran out of track and should appreciate the step up in trip today. (6) YAHO M J CAT ran 2nd last time at 1000M and should join Luminesce on pace early as should (7) WONDERFUL BRUSH, who has hinted at ability across three attempts so far.

(3) MUNHAK ARIARI comes in off the back of two 3rd place finishes and a 2nd from his latest three and while it’s true he’s been a fair way behind the winner each time – and that he has been the favourite each time – he is probably worth one more go today. From gate 3, he should get to the early lead and this can finally be his day. (4) PHOENIX WOLF has a similar record and can continue her run of placing finishes. She’ll challenge Munhak Ariari for the early lead as will (6) DAEGUNUI CHANG, who led for much of the way over 1300M last time out only to ultimately finish 2nd. Back in trip, he can be dangerous. (2) AMAZING SOCKS was a class and distance winner last start and while he carries an additional 4kg today, must be respected. (5) THE SPIKER ran a creditable 2nd on debut and is another in contention.

A five-length maiden winner over this distance in a fast time in November, (9) DADDY GLORY followed up by running 2nd in a strong race at this class just before Christmas. She is likely to be ridden on or very close to the pace today and should have too much. (5) SMILE GIRL is up in class and distance having won well on debut at 1000M. She has a
bit to find here but should challenge for the early lead and can be a factor. (2) DAMON ANGEL and (3) SMARTY ADELE have both proven competitive at this level and should be in at least the placing hunt. (4) MODU DREAM is up in class having run 2nd in both starts so far and she shouldn’t be out of her depth here.

(2) DAE WAN MA kicks off her three-year-old campaign by stepping up to two-turns for the first time and it should result in a comfortable win. She was beaten just half a length in the Breeders’ Cup race at Busan in early December and her only other “defeat” came when she was disqualified. She’s a bright prospect who can lead all the way. (3) MAMBO KHAN has had a few setbacks but enters in good form having run 2nd in both his latest two outings. That puts him up in class here, but he has won at this distance and can go well. (5) SOMETHING MYSTERY also holds a win at this trip and while his latest effort wasn’t great, he can get another chance today. (6) YES YOU CAN enters in solid form and looks good for a place while (9) HIBIKI is also capable on his day.

(3) DALGWA GUREUM is up in class following a seven-length score over 1300M just before Christmas. He’s up in trip too but there’s no reason to suggest it won’t suit and he can win again, most likely leading all the way. (4) RULE BREAKER also tries the distance for the first time, in his case coming in following 4th place in a strong race at 1300M. He’ll settle behind the early lead and can finish strongly. (5) SUN VICTOR and (1) SEUNGRI PLUS do both have experience around two-turns and while neither did anything too special last time, they should be in the placing frame here. (6) RAON MIRACLE remains a maiden but is another who steps up in trip for the first time could challenge for the money.

(1) GAENARI SONG ran out a half-length winner on debut on December 8th. The time wasn’t quick but neither was the track that day so we’ll not read a whole lot into it other than that he has potential, is up in class and distance here and can win again. It won’t be easy though. (2) CHANGSEONG LUCKY and (11) RAON DOLPUNG came home 2nd and 3rd when they raced each other over class and distance on December 22nd with only a head separating them. They’ll be the main dangers here. (6) BEST LINE is up in class after a win and a 2nd place from his first two outings. Like Gaenari Song, he steps up in trip too and can be competitive. (12) WINNER BROWN is another up in rip having run 2nd on his first try at this level at 1000M last time.

(11) DAEGUN JEPAE has finished 2nd in both his starts so far, beating a few of these along the way. He gets drawn wide for the third time in a row but can overcome it and can make it third time lucky today. (4) INCHEON CHIEF also races for the third time here. He’s finished 4th in both prior efforts and was beaten five-lengths by Daegun Jepae today. He might not overturn that form but can get closer. (1) WORLD STARK has been getting closer across four attempts and rana close 3rd last time at class and distance. (7) WHIZ REINA is two starts into a comeback following a few months out and also looks to be getting closer. If it’s previous winning experience you are looking for though, (10) RICH MINE is the one. She made all to score by five-lengths last time out five weeks ago. The only caveat is that win, just like her previous two, was at the minimum distance of 1000M.

(3) CALLIOPE won five of his first nine starts and while his record snow stands and five from thirteen, he’s been knocking at the door again in useful company recently and while he is top weight here, he slips up to two turns for the first time and can return to the winner’s circle. (1) TAMNA KING come in with recent form at this distance reading well and is likely to join Calliope in bringing them along early. (4) SPEED IS KHAN too is competent around two turns and can be a threat. (2) HAETSAL WANGJA steps up in class having won at this distance in December and has little to fear at this level.

(1) MOONHAK CHIEF finished off his three-year-old season with 3rd place in the KRA Cup Classic and then 6th place in the Grand Prix Stakes, both hugely creditable efforts. Today’s company, while strong, is much more amenable and under a very light weight, he’ll be expected to win. The light weight is due to the presence of (2) SHAMROCKER. He comes in following back to back runner-up finishes behind Winner Gold and looks set to run a good race again. (14) TOSCONOVA CAT is another who could well have a big year. He ran 7th in both the international Korea Cup and then the Grand Prix and while it’s still not clear what his best distance is, he should go close here. (8) YAHO SKY CAT and (11) SINJO DAEHYEOP are others in the hunt in a good race.

(5) THE QUEEN GRACE was scratched from a scheduled start early this month having sustained a minor facial injury. She was set to be well-backed for that and she’ll be well-backed for this too as she was in good form at the end of last year and can continue it here. (6) BEST BULLET won back to back races in September and November, with one being at class and distance. He comes in having run 3rd in a decent contest at 1000M a month ago and should be a factor. (7) BEST HILL enters with a 100% record to defend having won both starts today. Both were at 1000M and she is rapidly up in class, but she should be competitive. (4) WINNING BLADE also steps up in class after a narrow win at 1000M in November. He’s had ten weeks off since then and should be in the hunt.