Road Winner may have endured a torrid time in the season-ending Grand Prix Stakes a month ago but the up-and-coming US bred colt, who won the JRA Trophy on International Weekend last September, looks primed to return to winning ways in the Class 1 Sunday feature at Seoul Racecourse. (11 races at Seoul from 10:45 to 18:00 & 6 at Busan from 12:40 to 17:05) 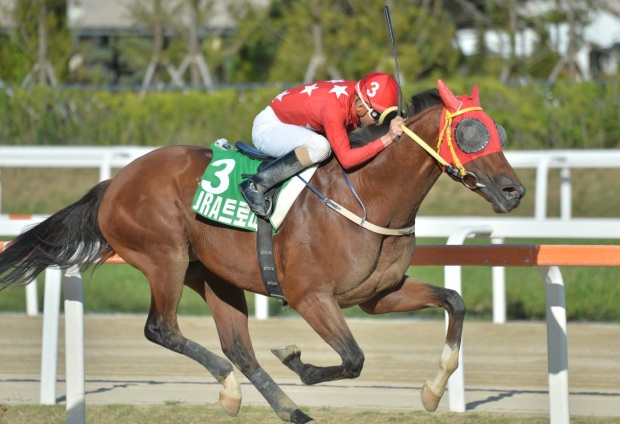 A son of Discreet Cat, Road Winner was a bargain $20,000 purchase at the OBS 2017 Spring-Sale of Two-Year-Olds. He paid that back in double-quick time winning five of his first seven including that three-length score in the JRA Trophy. Another win a month later saw him take his chance in the Grand Prix and while that may have been too much too soon – he ended up 10th of 16 behind Triple Nine – as he begins his four-year-old campaign, he remains one of the hottest prospects at Seoul.

He faces thirteen rivals over 1800M, but Road Winner is carrying a light weight – which sees Kim Yong Geun, who partnered him in the Grand Prix, retain the mount – and beat three of this field when winning his first class 1 race in October. He’ll be expected to go to the front and dominate. Seven of those thirteen raced each other in a similar contest to this on Grand Prix weekend when Haemaru ran out a 38/1 winner. His reward is 58kg to carry today though and 2nd and 3rd place-getters Daeil Shinhwa and Singgeureoun Geom may end up being more dangerous contenders along while the consistent Gaeuli Jeonseol, who has finished in the top four in each of his latest seven starts, all at class 1, another with claims.

At Busan, New Legend goes around for the third time since returning to KOrea from the United States. He’s two for two so far and should make it three in race 5.

(3) SONGAM BARBIE is likely favourite here having registered a 2nd and a 3rd among four outings to date. That 3rd place was last time and she was within a length of the winner having come from off the pace. (4) FULL MOON OCEAN should improve for her two starts so far which have ended in 6th and 4th and she should be close while the more experienced (10) STEEL RUN was a close at hand 4th last time and the jockey booking is a plus. (5) DANGDAE JILJU overcame some hefty bumps at the start to run an improved 3rd last time out and should be in the hunt again. (6) ROYAL SHALOM was well back behind Songam Barbie a month ago but can improve here.

The wonderfully-named (3) HORSE QUEEN came close to getting her maiden win at lengthy odds last start on December 8th but having led for most of the way, ultimately ended in 2nd place to Charon Blade. She’s strongly favoured to prevail in this race which is restricted to three-year-old maiden fillies. (2) SAMAE JILJU came home 3rd in that race, having started as favourite and should be the main threat here although she has a full seven-lengths to make up here. (4) TO THE VICTORY showed improvement on her second career start in November and can continue her progress here following seven weeks off. There are four debut-makers and among them, (1) BIG CLASSIC won a trial back in November and looks nicely in first-up.

Competitive maiden that’s restricted to three-year-olds. (8) OKAY TAP ran a very solid 3rd on debut back in November, running on well over 1000M. He steps up in trip for his second appearance following seven weeks off and can come from behind to score here. (9) CHEONNYEON HAPPY has a 2nd place to her name at this distance and move back up in trip after a close 4th over 1000M last month. She can be ridden patiently here and finish strongly. (1) HAERANG was well beaten by Cheonnyeon Happy in October but showed signs of improvement when re-appearing with a 5th place in December and could challenge for a place today. (6) NALARA HILL started awkwardly but ran on nicely for 4th on debut on December 8th and is another who can improve for the increased trip. There are two debut-makers and of the pair, (3) MASON impressed in trials and may go well first-up.

Three-year-old maidens here with five of the twelve racing for the first time. We’ll go with one of the experienced ones though and that’s (10) DRAGON BOAT, who was 2nd on debut on December 8th. He’ll be on pace early and can lead all the way. (3) WIND RIVER was a touch disappointing when Even-Money favourite on what was her third career start last month, ultimately finishing in 5th place. Mon Se Young takes over from an apprentice today though and she should be closer. (8) CHEONJI POKPUNG and (12) BULUI QUEEN also have scope to improve on their respective latest efforts. Among the debut-makers, (5) RICH RULES is a half-sister to a number of proven winners (Icheon Ssal the most recent). She won a trial three weeks ago and can go well first-up here.

Back in October, (9) GEUMA FALCON returned from seven months off to run 2nd at this class over 1000M. He then stepped up to 1700M four weeks ago and raced prominently until weakening late on. He drops back in trip today and is the one they need to beat. (6) FLYING FORD raced very greenly on debut back in November but still managed to finish 5th. He’s had a couple of months to sort things out and could well improve here. (2) KILIUI PYOBEOM has stalled a little since a promising start but is nicely drawn to get on pace here and could be worth another chance while (3) EONEU MEOTJIN NAL unseated his jockey in an incident in the home straight last time out in a good race. He ran well at class and distance the time before and should be a factor here. There is one debut-maker and it’s potential a good one. Jimmy Creed colt (8) HWANGPYOMA won a December trial and should suit this distance.

Good race here involving four last start winners, all up in class today and those four could well be the ones battling it out for another win here. (10) YAHO THUNDER CAT was the most impressive of them, winning by three lengths in a fast time on what was his second career start in November. He doesn’t need to lead so the draw is no problem and he can win again. So too can (8) GLOBAL CHEONA. He had to wait until his third race before getting his maiden score, but it was emphatic enough. He’ll looks to lead. As will (9) ECO BROTHER, who enters with a 100% record having won on debut on December 8th and who should also go close here. (11) JILPUNG GANGJA completes the set of up in class last-start winners. He returned from several months off looking a much better horse and can continue his improvement today. Of the ones with experience at this class already, (6) THUNDER MONEY, 2nd at this distance last time out, looks the best.

Tricky contest this. (9) BODEURAM has come into a nice run of form lately and while she is up in class here, she could go one better than the 2nd place she managed at 1300M last time out. She won’t be quickly away but can come past plenty late on. (11) SOL PARANG END_OF_DOCUMENT_TOKEN_TO_BE_REPLACED