Haeya sprinted her way to success for the 6th time in 12 career starts as the lightly raced five-year-old mare took victory in Sunday’s feature at Busan. 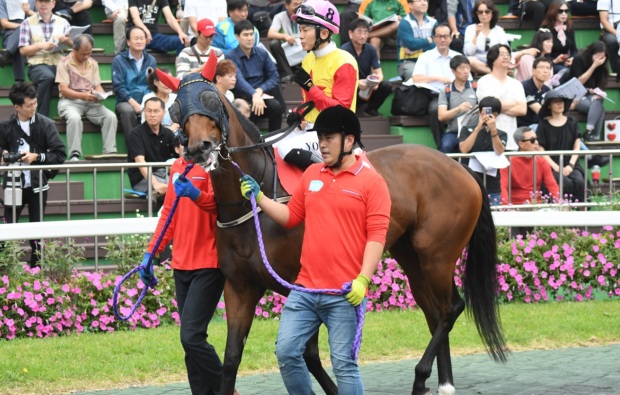 Haeya, seen here at the Korea Sprint, was a fine winner on Sunday (Pic: Ross Holburt)

A good field assembled for the 1400M “Road To G1” contest on the South Coast with Haeya joined by big name sprinters such as Perdido Pomeroy and Drop The Beat. King Of Ace made his second start since returning from surgery while Macheon Bolt, 2nd in the Korea Sprint in 2016 also returned for the first time in almost a year. Diferent Dimension also made his first start since moving to the stable of Kang Byung Eun.

Not many of them went well. Neither King Of Ace nor Macheon Bolt looked fully ready while Diferent Dimension showed early but then faded. Perdido Pomeroy as ever set the pace but Haeya was always handy and under You Hyun Myung, she struck the front in the home straight, running on to win by a comfortable two and a half lengths. Outsider Stealth and Thomas Gillespie’s Party Again came home strongly late to take 2nd and 3rd.

Haeya [Flatter – Luxaholic (Macho Uno)] was 2nd in last year’s Ttukseom Cup and 3rd in the KNN Cup, both times behind Silver Wolf and looks set to be a contender in those and other big races up to a mile later in the year.

With victories in the Gyeonggi Governor;s and Gwacheon Mayor’s Cups followed by 2nd place to Ecton Blade in the Breeders’ Cup, Choinma was the biggest earning juvenile in Korea in 2017 and widely expected to play a big role in the Triple Crown series this year. He stepped up to 1700M for his first outing of 2018 at Seoul on Saturday and was sent off the prohibitive favourite in a class 3 handicap. It didn’t quite go to plan as not for the first time recently, a long-shot got on pace early and couldn’t be caught .

This time it was 45/1 Jeongan Kingdom who made all and while Choinam rallied late on, he was still a full two and a half lengths adrift in 2nd place on the line. It wasn’t the most auspicious beginning to his three-year-old career but it’s early days and conditions will likely be very different once we reach the KRA Cup Mile in April.