12 races at Seoul on Saturday with the first at 10:45am and the last at 6pm. Wrap up warm! Here are the previews: 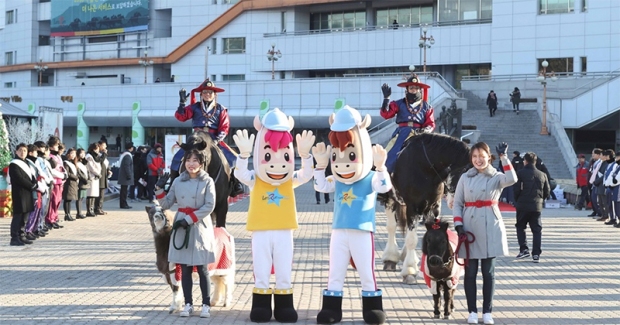 The heavy artillery was out to welcome punters into the racecourse last week – It’s going to a be cold one this time around though – bring a thick coat! (Pic: KRA)

Only three of these have raced before and in all honesty, none of them have impressed. That said, expect both (2) O.K. DAY, on the strength of the jockey/trainer combination and (3) ROAD MAN, having not done terribly on debut, to get some backing. It is, however, to the debut-makers that we turn to for top picks. Both (1) RAON ZEUS and (7) YAHO SMART CAT have won trials, the latter in a more eye-catching fashion. (4) GANGTOMA too looked competent enough and may be considered. As always with these kind of races, keep an eye on the market.

2nd in a decent contest a month ago having been 3rd in debut in November, (4) THUNDER MARINE has every chance of going one better today. He took a while to get going from a wide draw and also hung inwards throughout last time but is pretty much in pole position here and can lead all the way. (2) NONGBON DAERO came even closer to a maiden win last time, just being beaten a nose over the distance and he is the main threat. (7) CAMP TOUCH debuted in that race behind Thunder Marine last month and although she finished 7th of 12, that was by no means a disgrace and she can come on for it here. There are a couple of first-time starts and (5) CHOWON GUNJU looks the one most likely to go well first-up.

Competitive all-filly race this. (4) GEOSEN MAPUNG was sent off as odds-on favourite last start on December 19th and very nearly led all the way before ultimately ending up in 2nd. She should get on the early speed once more and can be given another chance to get it right here. (11) FOREVER WINNER came home 2nd in a similar race to this at the end of November and can overcome a wide draw to challenge once again here. (3) CITY ANGEL had a bad day when well backed last start but has shown speed and can be considered while (2) JEONGSANG MUJEOK and (10) THE PRIMA came home 3rd and 4th in a similar race in what was for both their debut on November 26th and both can look to match those today.

(8) BACK TO BACK was a good winner over 1200M on December 9th and while he is up in class today, he looks to have every chance of securing back to back victories. He’ll settle just behind the early pace and can finish strongly. Joining him up in class and firmly in the hunt are (1) BOLD SHINING and (9) LEONNING STROM. Both were decent winners last start although the latter’s came at this distance and he’s favoured at this stage to make a more immediate impact at this level. (7) JAELONGI is yet to win but comes in off a quick, if unexpected 2nd place over class and distance last month and can be considered. At the other end of the experience spectrum is (2) YEONGAM ARIRANG. He was a class and distance last September and while he’s been underwhelming in two outings since, this looks the kind of race he can pick up some minor money in.

Really open contest this which could go one of any number of ways. (10) DAEGI SOKDO was a 20/1 class and distance winner on December 16th, beating three of his rivals here in the process. Can it happen again? Possibly but others will be favoured. Principal among those others is (11) RAON KINGDOM. A good winner of slightly stiffer looking contest than this one over 1200M at the beginning of December, he steps back in trip END_OF_DOCUMENT_TOKEN_TO_BE_REPLACED