It’s been a bitingly cold week on the Korean peninsula but the worst seems to be over and there is a good 12-race card at Seoul on Saturday with the 1st at 10:45 and the last at 18:00. And what better way to warm up than with the 2018 season debut of Cheongdam Dokki? He goes in race 11. Here are the previews: 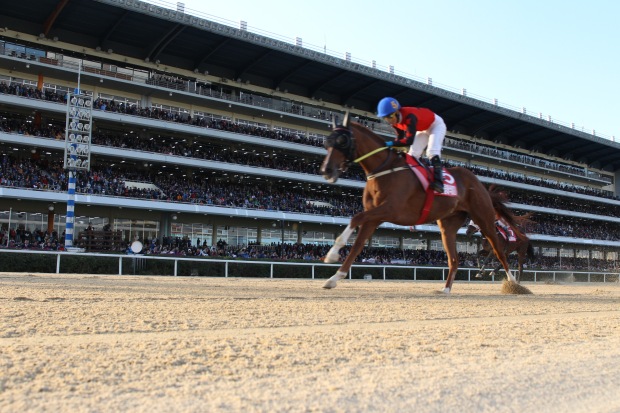 Just fillies here and plenty in with a shout. (6) SEONGBUL CHAMP has shown some ability in three starts so far including a good 5th of 12 in tougher company than this last start. She trialled up nicely a couple of weeks ago and is a prime contender here. (5) BETTINA’s best result so far came on her only prior outing at this distance and with Djordje Perovic on board, she too looks to have a strong chance. (1) HWANSANGUI BIT showed improvement on her second start and can maintain it here while (9) RUBY FALLS and (12) MORAN DONGBEAK are others who can get close.

(9) JEONGSANG DOLPUNG led for much of the way round over 1300M last start and dropped back to the minimum distance today, is the one to beat. He previously ran 4th at this trip in a tougher race than this and can get it right this time. (3) BIG AURORA has shown some talent, principally when running 2nd at this distance in October only beaten half a length by Ji Seoni, who went on to win again. He’s disappointed as favourite in two losing efforts since but gets another chance here. (1) CHEONGDAM QUEENS and (4) SAE DIXIE are likely to challenge Jeongsang Dolpung for the early lead and can stay on until the business end of the race while (2) BIG THUNDER did nothing particularly wrong on debut and can improve.

With a 4th and a 2nd in her two starts to date (4) MASYA will be strongly favoured to finish on top here. In both those races, she’s come from well back and finished strongly and that’s what she’ll be looking to do here. Should she leave herself too much to do though, (10) HANSEN BAROWS can take advantage. He could well get an easy lead early on and that’s going to put pressure on the favourite. He could conceivably stay on all the way around. (1) THE FINAL has been 3rd in both her races so far, the latest at this distance and she has every chance of continuing that run today. (5) MACH SEUNGNI and (7) PALDO GANGTA looks best of the rest.

A winner on his debut in November and then a close 3rd behind Sinui Myeongryeong and Mask in a valuable race on Christmas Eve, (6) COMPLETE SWEEP is strongly favoured. He made all in that first-time win and should be able to get on or close to the early speed today and should win. (11) SEUNGRI SIDAE was one-paced on his latest on a END_OF_DOCUMENT_TOKEN_TO_BE_REPLACED