While other races may carry more prize money, in terms of honour and prestige, the Grand Prix Stakes is second to none in Korea. It’s a race that has had movies named after it and is, perhaps, the only domestic horse race to register in the national consciousness.

Sunday at Seoul Race Park sees the 31st edition of the race. It’s young in international terms, but in a country where the private ownership of racehorses – and therefore prize money and big Stakes races – go back less than two decades, it is positively venerable. With race fans invited to vote on which horses they want to see in the starting gate, it is the undisputed Championship race in Korea. There is no question of the best horses trying to avoid each other as there is nowhere else to go. In the Grand Prix, the best face the best.

This is because whereas the Classics are restricted to Korean bred entrants, the Grand Prix is open to all. Indeed in the previous 30 editions, home-bred horses have ended up in the winner’s circle just four times (including Mister Park who was born in Korea after his dam was imported while in foal). Fillies or mares have won the race five times with Ka Shock Do taking back-to-back wins in 1990 and 1991.

The origin of the winners also shows the change in influence on Korean racing. Throughout the eighties and nineties, the vast majority of horses imported to Korea were from the Southern Hemisphere. This is reflected by Australian or New Zealand breds winning thirteen of the first sixteen runnings, compared with just one American. Since the turn of the century, the majority of imports have come from the USA and American breds have won six out of the last eight editions.

As recently as 1999, a non-thoroughbred was triumphant. Saegangja was by the established sire Fiercely, however, his dam Chuk Je, was not in the studbook. That won’t happen again as year on year, Korean racing gradually becomes more mature.

Last year’s winner Tough Win is likely to contend favouritism for this year’s race with the remarkable Dangdae Bulpae, who is now a three-time President’s Cup winner. Dangdae Bulpae didn’t stay the distance in 2010 and didn’t even start last year but at five, he appears at the peak of his powers. 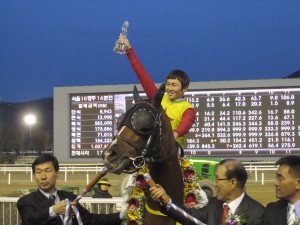 While Derby winner and champion three-year old Jigeum I Sungan looks set to sit out for sporting reasons, two other names are missing who really should have been here had circumstances been different. 2010 champion Mister Park tragically died after a race at Busan in June this year while Smarty Moonhak, who finished 3rd in the race as a two year old a year ago, was diagnosed with tendinitis after finishing second to Dangdae Bulpae in the Busan Metropolitan.

There is still plenty of interest besides the big two though. US filly Gamdonguibada has won two bg Stakes races and is getting better and better while Sing Sing Cat defeated an out-of-sorts Tough Win to claim the KRA Cup Classic. Meanwhile there are young up and comers such as Smoking Gun and Sydney Jewelry who may also take their chance.

Also set to line up is Dongbanui Gangja, the 2008 and 2009 champion. He’s fit and he’s still fast but he’ll be an outsider to add a third crown.

On Sunday Tough Win will seek to join Dongbanui Gangja, Ka Shock Do and the great Po Gyeong Seon as double winners of the race and prevent a new name being added to the list of horses below who, for one year at least, can claim to have been the undisputed best.

* Although this is the 31st running of the Grand Prix, Korean racing records officially only go back to 1985.

* This is an updated version of a post that appeared on this blog in the build up to last year’s Grand Prix. And the year before and the year…etc.