Seoul Race Park wrapped up its 2012 program today with a bumper fourteen race card which saw a shock in the feature race and also some potential emerging talent for next year finding their way to the winner’s circle.

Being the first horse by US champion Curlin to find his way to Korea, there was always going to be plenty of attention on two-year old colt Byeokdu (Curlin – Vague Notion).

After finishing fourth in his first two starts, he pulled himself together and became a winner last time out and today, he made it two wins in a row.

Under Jo In Kwen, Byeokdu looked to be having a difficult time finding a gap as the field entered the home straight, however, after finally freeing himself with a furlong to run, he cruised into the lead and over the line with a length and a half in hand. He will be one to watch in 2013.

Seoul’s final feature race of the year had an unexpected result. Favourites Tongjesa, Ace Galloper and Magnifique were beaten as 40/1 outsider Victory (Osumi Jet) came down the outside of the track to surprise everyone. Ace Galloper managed second place but the other favourites were nowhere as 50/1 Cheot Insang rounded out the placings.

Victory. a five-year old gelding now has 6 wins from his 32 race career. This was his first at class 1.

The long shots weren’t finished there. In the track’s final race of the year, 102/1 chance Cheonguntaehu (Capital Spending) pulled off a remarkably convincing win ahead of 13 rivals. It was only the second win of the five-year old mare’s 31 starts, her only previous success coming in November 2010. That day she was ridden by Lee Keum Joo; today it was another female jockey, Yoo Mi Ra who rode her, scoring just the 6th win of her own career. 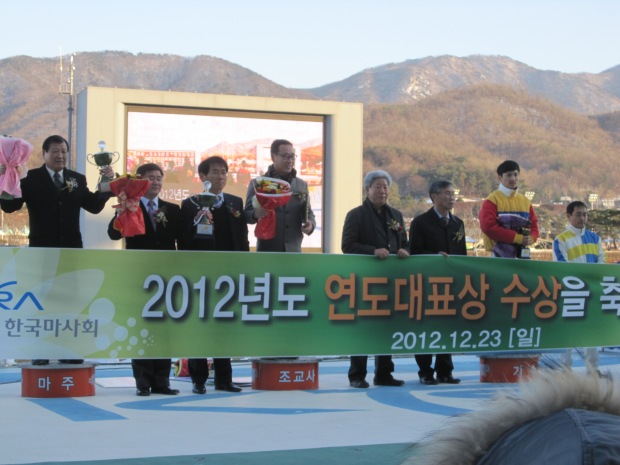 Despite the sub-zero temperatures and biting wind, a short ceremony was held to give out Horse and Jockey of the Year awards. Korean Derby and Minister’s Cup winner Jigeum I Sungan (Ingrandire) took the Horse Of The Year honours while Moon Se Young, champion jockey by a record margin and with a record number of winners was awarded Jockey Of The Year.

Next weekend, Busan takes centre stage as it hosts its final meeting of the year. Racing returns to Seoul on January 5th when the Herald Business New Year’s Commemorative Stakes will be the feature.