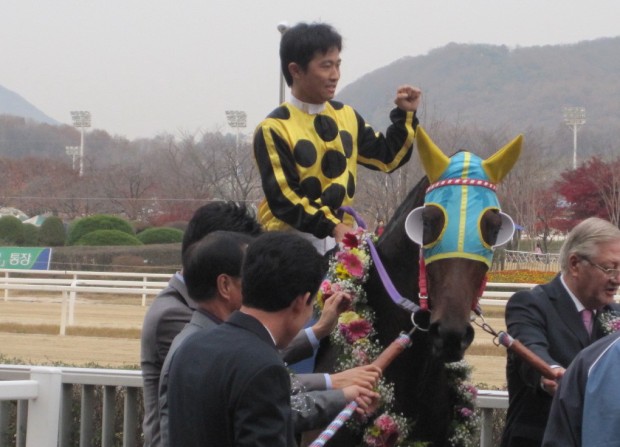 It’s very rare in Korea for a two-year old to race nine furlongs and even rarer for them to compete in a Trophy race against older horses. However, such was Smarty Moonhak’s reputation coming in – and a less than intimidating line-up of rivals – that punters made him the long odds-on favourite.

He didn’t disappoint. Drawn in gate 11, jockey Shim Seung Tae sent Smarty Moonhak fast out of the gate to take up a position just behind early leader Yaho Cat. They stayed in this order until entering the home straight when Shim asked his colt to shift up a gear. This he did and the pair cruised away from the field to win, easing down, by eleven lengths.

Smarty Moonhak now has four wins from five starts. His only loss came in his very first outing when he was second behind another highly rated import, Mister Captain. Since then, he’s breezed through all his races. Next year could be a big one for him. 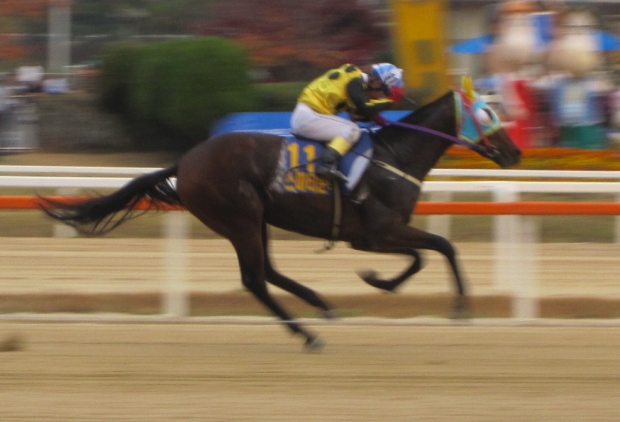 Smarty Moonhak Speeds to Victory in the TJK Trophy

Action returns to Seoul tomorrow in the shape of the President’s Cup, the most valuable prize on the Korean racing calendar. Dangdae Bulpae is set to be slight favourite to retain the crown he won last year but there will be plenty of support for his fellow raiders from Busan; Cheonnyeon Daero, Yeonseung Daero, Useung Touch and Dongseo Jeongbeol – Classic winners all. It should be a great race.