Filles Get Their Chance in The Gyeongnam Governor’s Cup

Last weekend, Busan horses came up to the Capital last and soundly defeated their Metropolitan counterparts in the President’s Cup. However, this week, seven fillies and mares have headed down the Gyeongbu Expressway and will attempt to exact revenge in the Gyeongnam Governor’s Cup. The race, which will be run oover 10 furlongs is, after the Korean Oaks, Korea’s second richest race that is only open to Fillies & Mares. 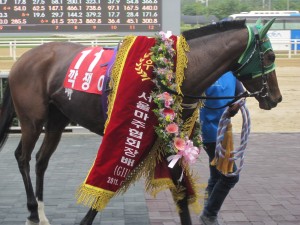 And the visitors have an excellent chance of returning with the big prize. Three year-old Kkakjaengi is already a multiple Stakes winner and if she takes well to the Busan track, could be the one to beat. Also from Seoul, the grand old Top Point, one-time Champion Mare, seems back to her best after returning from a long injury. Recently the only horses to beat her are Ace Galloper, Magic Party and Race Terror – who came a surprising, but impressive, third in the President’s Cup. If that form holds up, Top Point will be hard to beat. Similarly, Geumbi has always been close and will relish the chance to run without colts in the way.

For the home team, Bulkkot Gisang was a mightily impressive two-year old but has struggled this year. Some encouraging runs of late suggest she may one day have a big race in her while Wonder Unicorn is, rather surprisingly, the only runner coming into the race on the back of a win.

As usual, the Seoul horses will all be accompanied by jockeys from the capital. However, the big names are staying put and some of Seoul’s lesser known riders and up and comers get their chance to shine on the south-coast. Among them is apprentice Seo Seung Un, who has been so impressive in his short career to date.

While the main event may be at Busan, Seoul and Jeju will of course host their regular weekend cards and both tracks will simulcast the Governor’s Cup.

* Here’s a full run-down of the runners and riders (with pedigrees, age and race records) for Sunday’s big race.

And here’s what’s happening when and where this weekend: