Last week we talked about Australian trainer Peter Wolsley and jockey Nathan Stanley who are currently the in-form partnership at Busan. Up at Seoul there is another pair who are less than conventional in Korean terms making headlines. On September 24, trainer Lee Shin Young and Kim Hae Sun became the first female trainer/jockey combination to win two races on the same card. 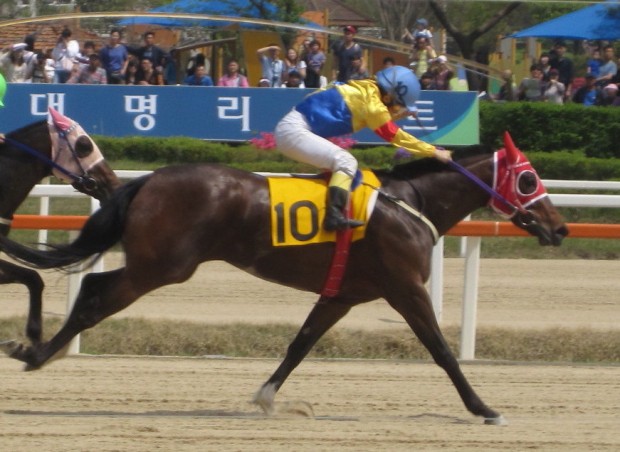 Lee Shin Young was only the third Korean woman to qualify as a jockey and in the July this year became the first ever female trainer. She’s had a remarkable start to her career in the barn. Out of 23 runners from her fourteen-strong string, she’s recorded 6 wins already.

She still holds the record for most thoroughbred wins by a female jockey in Korea at 90, however, her record seems almost certain to be eclipsed by the young Kim Hae Sun. Kim qualified in 2009 and has made the most of the opportunities afforded to her to rack up 37 winners already – 28 of them coming in the last year and 4 in the past two weeks.

It’s a record that is better than the two other jockeys in her graduating class, Park Sang Woo and Lee Gi Woong.

On that Saturday a week and a half ago, Lee and Kim combined with debut making US two-year old Belong To John (Belong To Me) at odds of 23/1 and then in the final race of the day on 8/1 Blue Charming (On Fire). Certainly punters will be closely examining any such generous odds on the pair in future.