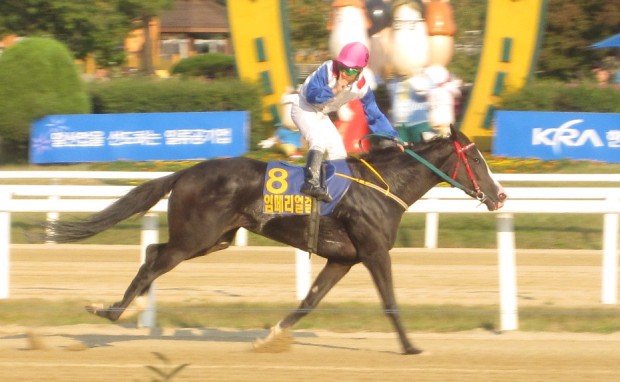 The seven furlong Cup race for fillies & mares attracted a competitive field of thirteen and it was the favourite Kkochyeoul who set the early pace with well-fancied Blueband Mama and Imperial Girl closely following her. They remained in this order until, with a furlong to go, Choi Bum Hyun asked Imperial Girl to accelerate and the three-year old motored away from her rivals to record a four length win from the fast finishing Hwansanguimulgyeol who swept home unnoticed on the stands-side.

The win was only the third for Imperial Girl whose previous career highlight was an impressive third place in the Owners’ Association Trophy back in June. For jockey Choi Bum Hyun – sporting a haircut that can charitably be described as interesting – it was a first big race win for over a year. The Chairman of the Singapore Turf Club was on hand for the presentation.

* On Sunday it’s the big one. The Minister’s Cup brings the 2011 Korean Triple Crown Series to a close. The winners of all three legs so far will be present – Soseuldaemun (KRA Cup Mile), Gwangyajeil (Korean Derby) and Useung Touch (Korean Oaks) – for the showdown at Seoul Race Park. Useung Touch is set to be the slight favourite but she’ll face strong competition not only from Gwangyajeil but also from the likes of improvers such as Champion Belt and Singgeureounachim. It’s set to be a great race – click here for the full preview. 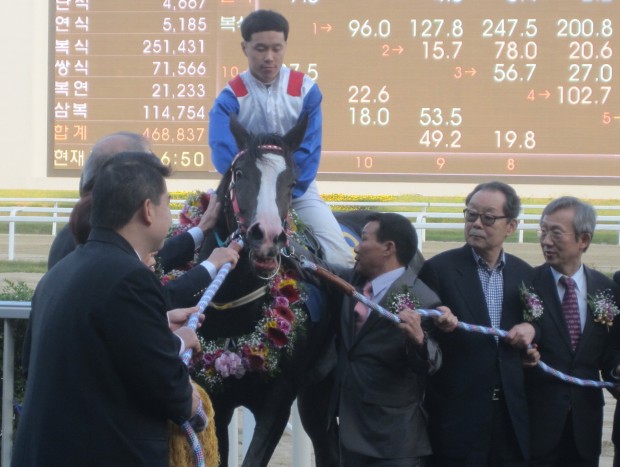 Imperiousness: Imperial Girl was tough to handle in the Winner's Circle