Tough Win took it easy for a while and then cruised by the field to record possibly the simplest of what is now thirteen career wins from seventeen starts. Back at 1800 metres and escaping the handicapper’s weights for once in what was a rare Allowance feature race, the result was never likely to be in doubt. 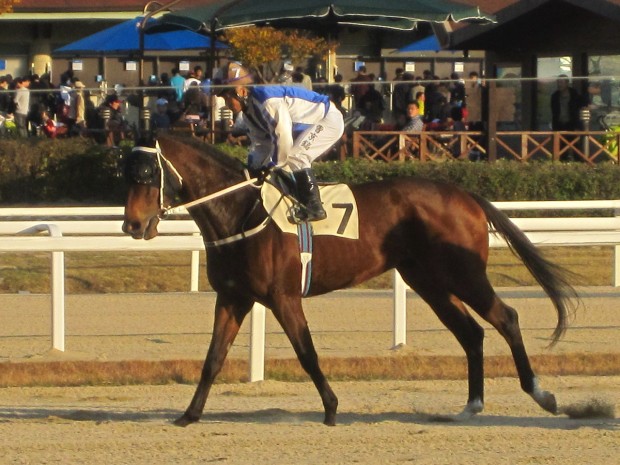 Tough Win heads to post for another easy win

Nevertheless, Tough Win (Yonaguska) was still up against the likes of Larrycat (Fantasticat), who finished way ahead of him in the Grand Prix Stakes last year and the in-form Japanese pairing of Necromancer (Air Eminem) and KJ Khan (Squirtle Squirt). not to mention the old warhorse and former Grand Prix winner, Bally Brae (Yarrow Brae).

Under Cho Kyoung Ho, Tough win sat at the back of the field around the first turn before moving into contention in the back-straight and easing clear as they turned for home. The margin at the end was eight lengths but it might as well have been eighteen.

Tough Win is a horse that exposes both strengths and weaknesses of Korea racing. Ultimately he’s a sprinter but there are so few sprint races for Class 1 horses, he has had to be stretched out further. No problems there; he’s head and shoulders ahead of anything else on the peninsula up to nine furlongs. Above that, it gets tricky but the only Championship races for imported horses such as Tough Win are at 2000 Metres (Busan Metropolitan) and 2300 Metres (Grand Prix).

Tough Win just about managed to win the Metropolitan last year but was soundly beaten this year as indeed he was in the Grand Prix. The Grand Prix is an Korean racing institution – racing fans get to vote on which horses should receive invitations and the result is that the best horses on the peninsula get in. It’s great. But it would be even better if we had both the Grand Prix Stakes and the Grand Prix Mile!

Down at Busan it was business as usual for Peter Wolsley and Nathan Stanley. The Australian trainer/jockey duo combined to win the feature race with Gyeongkwaehanjilju (Tapit). The grey four-year old has now won his last three races and Wolsley and Stanley are undoubtedly the most lethal combination at the track. At least some Aussies are flying this weekend.