Things just keep getting better on the track for Peter Wolsley and Nathan Stanley. The Australian trainer and jockey duo recorded another big win at Busan this afternoon as Secret Whisper took victory in the Macau Jockey Club Trophy by the narrowest of noses. 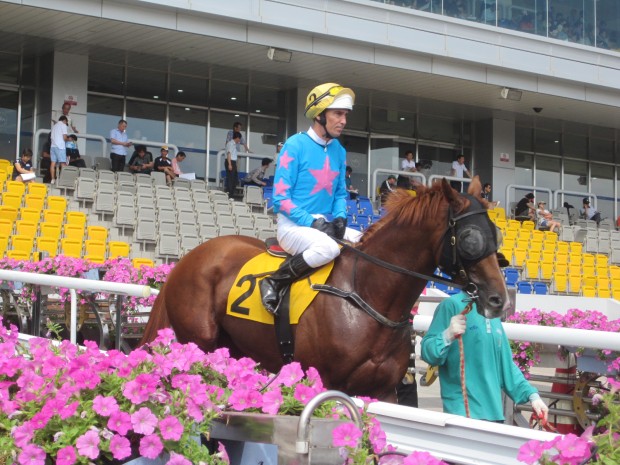 Sent off as second favourite, Stanley and Secret Whisper sat towards the back of the field in the early stages of the 1400 metre race as punters’ choice Jeonseong Sidae made the early running. There was still plenty to do when Stanley made his move entering the home straight finding one route and then another blocked off by traffic.

It wasn’t until deep inside the final furlong that Secret Whisper had daylight in front of her and she swept past Jeonseong Sidae just before the line.

One of five fillies among the fourteen strong field, the Pegasus Farm owned Secret Whisper now has five wins from her eleven starts. Although officially classed as a “Featured” rather than “Stakes” race, in terms of prize money, the MJC Trophy is still a big one and it continued the remarkable run of success that Peter Wolsley and Nathan Stanley have been enjoying of late.

For Wolsley it has been a long hard slog in the barn since arriving in Korea three years ago to reach his current position as one of the top four trainers at Busan. On the contrary for Stanley, success has been instantaneous. Since getting an unexpected bonus on his first day when he picked up the ride on Khaosan, who would go onto win the Owners’ Cup, it has been winner after winner.

With a win rate of nearly 25%, punters have started to look out for him. No doubt the local jockeys will be doing exactly the same. They should; his ride on Secret Whisper today was both resourceful and well judged.

Up at Seoul the fillies were in Stakes action in the Gyeonggi Governor’s Cup and it was three-year old Seingniuihamseong, fifth in the Korean Oaks in August who took the honours. Last but one entering the home straight, Moon Se Young guided the 5.1 second favourite through the pack to hit the front with just metres to spare to win by just under a length.

A word too for apprentice jockey Lee Hyeok. In race 3 at Seoul today, he won for the very first time as he partnered 9/1 Damas Ruler to victory. An hour later he was back in the winner’s circle with Exciting Runner after race 5. With his two wins today it means that all three of this year’s new jockeys are off the mark – Lee is one winner behind Lee Ah Na and Seo Seung Un who both have three.