The 2010 Korean Triple Crown draws to a conclusion at Seoul Race Park this coming Sunday as this year’s top three year olds come together for the last time in the Minister of Agriculture (FAFF) Cup.

Unlike last year there’s no Triple Crown on the line and only one of this year’s three Classic winners will line up. Nevertheless, it looks set to be a great contest. 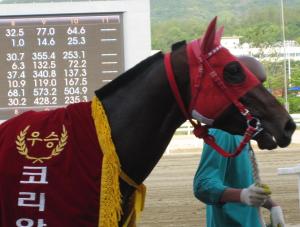 Derby winner Cheonnyeon Daero heads the field. In his two outings since May he’s recorded a win and a disappointing fourth but he’ll have plenty of backers on Sunday to make it two Classic victories. Joining him on the trip North from Busan is Dangdae Bulpae. Since finishing third in the Derby, he’s unbeaten and is coming off a terrific win in the Gyeongnam Governor’s Cup in which he beat Namdo Jeap, the winner of this race last year.

Apart from Cheonnyeon Daero and Dangdae Bulpae, Busan, which has been provided the winner for the past two years sends Glory Yeonggwang – the shock winner of the Gold Circle Trophy three weeks ago – and Triple Sinhwa, who was a money winner in both the KRA Cup Mile (Korean Guineas) and the Derby.

For the home team, there’s no Money Car – the KRA Cup Mile winner is on the long-term injured list – and without him, it’s hard to see the Trophy still being in the capital on Sunday evening. Best Holls won the Ilgan Sports last month while Tamnaseontaek was sixth in the Derby. Bonsol and Tracker have always threatened to turn into decent horses while Andy’s Runner provides a first Korean Classic mount for Japanese rider Hirotaka Hamada. With Dongbang Rose not making it, Yerimi is the only filly in the race.

The Minister’s Cup is race 9 on Sunday and comes under orders at 5pm. Here’e a full list of runners, records, home tracks and riders:

And here is what is going on when and where this weekend: