Last week, Tough Win was crowned King of Seoul. Today, Dangdae Bulpae came up from Busan and put in a performance every bit as impressive to win the Minister’s Cup – the final leg of the 2010 Korean Triple Crown – and take his place as the year’s top Korean bred three-year old. 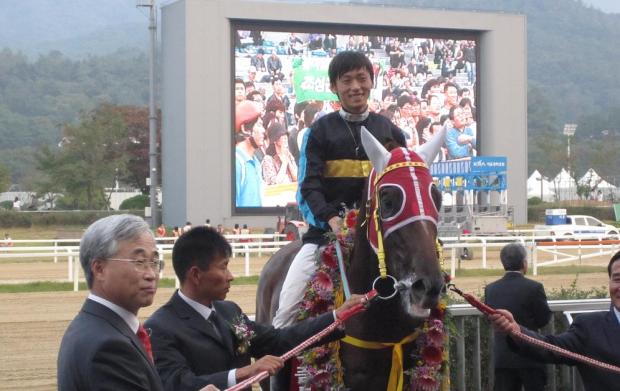 The similarities were striking. Completing the ten-furlongs just half a second slower than Tough Win did in the KRA Cup Classic, Dangdae Bulpae, like his US-bred counterpart last week, won the race with a quick burst of speed as the field entered the home straight, sewing things up with a furlong remaining. Indeed, so confortable was the win that jockey Jo Sung Gon spent the last 100 metres striking posing for the 60,000 racegoers in attendance.

And he had every right to do so. The horse who got closest to him was Cheonnyeon Daero. It was a valiant effort from the Derby winner but at no stage did he look like threatening the winner. Completing a Busan clean-sweep of the placings was Glory Yeonggwang, a further length and a half back in third. 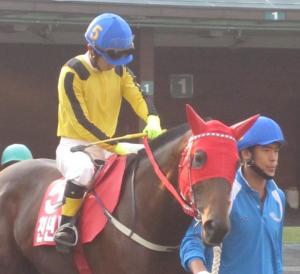 Lost in the haze: Cheonnyeon Daero had to settle for second today

Indeed, Busan’s remaining entrant, Triple Sinhwa took fourth. It’s a remarkable achievement for the Gyeongnam track and one that should have Seoul’s trainers once again asking what they are doing wrong. In the event. Tamnaseontaek was the first of Seoul’s finishers – and in fifth, the only one to gain any prize money.

Those recriminations – and believe me, we’re going to have them here very soon – can wait. Today is about celebration and anticipation. Dangdae Bulpae, now a winner of eight races from eleven starts, has already beaten older horses in the Gyeongnam Governor’s Cup and today he only needed to show a fraction of what he might be capable of. Race fans can only hope that his connections prove ambitious and want to test him against foreign horses.

The biggest event on the Korean racing calendar is the season-ending Grand Prix Stakes. It’s open to all and punters vote on horses to receive invitations. Now that Busan horses are also eligible, Dangdae Bulpae’s election should be a formality. Whether the invitation will be accepted or not is quite a different matter. Let’s hope it is as waiting for him back in Seoul in December will surely be none other than Tough Win.

* Thanks to Roar for the upload.