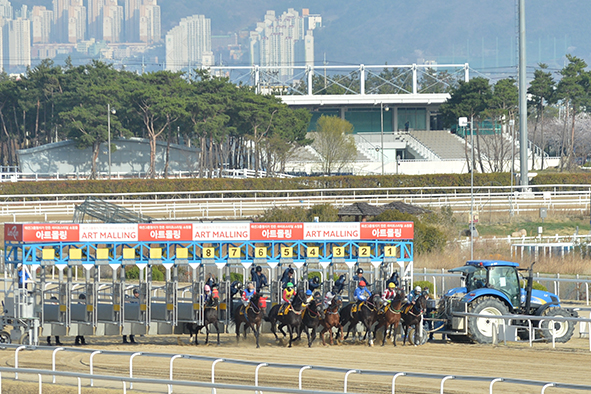 (2) USEUNG STORY has been close in each of his latest three, running on well for 3rd last time out in a slightly stronger race than this. He can set up camp behind the early speed here and come through strongly late on. (4) GRAND JILJU will be on pace from the start. He was an improved 2nd at this distance last time out a month ago and should be dangerous today. (3) FUNKY steps up in trip following some near-misses at 1000M while (8) GIDAEHAE and (9) HAPPY GATE are others who have shown some competency and can be in the hunt for money here.

(7) NUMBER ONE STAR ran 2nd on debut at this distance on March 22nd. He’s from the track’s top stable, should have come on for the run, and is the one to beat here. (9) MATCH WINNER has a 3rd and a 2nd from two outings so far, both at this distance and both times in reasonably company. He’ll be on speed from the gate and can go close again. (12) NAEGA SAEGANGJA has finished no worse than 4th in four starts to date. He ran 4th behind Number One Star last time out and while he has a bit to find if he is to win, he can maintain his record today. (8) TWO TWO SIMON and (10) TURBO SPEED are others in the placing hunt.

Three-year-old maidens here with five first-time starters among the field. (4) MAJOR PUNCH has raced just the once, all the way back last September. She ran well too, finishing 3rd and did enough to be entered for a big juvenile race later in the month. She didn’t make it there but returns today having won a trial in good order at the end of March and could well be the one to beat. (2) TOHAM IMPACT ran well at this distance in February and while she had a hard time at 1300M on her return last month, should be better today. (10) RAINBOW PARK has run 4th in both outings so far and can aim to match or better that here. Of the first-timers, (7) FAMILY SONG and (8) TOHAM STAR look the best at this stage.

(8) RAON TOWN ran 2nd on debut over 1300M on March 29th, running on nicely. The extended trip today should suit and he’s the one to beat. (2) DANDI QUEEN was 3rd in that same race. She was a full five-lengths adrift but came from well back and is another who may well appreciate the opportunity to stretch out in distance. (6) ROYAL TICKET has only narrowly missed out in his latest two, both at the distance and he should be close again while (9) SINHEUNG BULPAE was a much improved 2nd when stepped up to this distance last start and while this is tougher, can run well once more. (4) HAENGBOK KOREA looks best of the rest.

(5) MUJEOK VETERAN is two starts into a comeback and showed enough when 5th in stiff company last time out to suggest his form is improving and he’s not far away from another win. It could be here. (2) ONNURI GANGJA is a fifty-race maiden and while it would be stretch to suggest that he’s about to snap that streak here, he looks nicely in here and this is the kind of race in which he usually wins some prize money. (1) RAON CAESERS had a poor day at the office last start but steps up to this distance for the first time with claims to improve. (6) GIPPEUM DAY and (8) KWAEHAN SINGANGJA, the latter up in class after a good win over this distance last time, are others in the hunt.

(5) NAEGA DAESE was just beaten a nose in a similar class and distance race to this on March 29th having led almost the entire way around. He may not necessarily lead from the start here but has every chance of going one better. (6) ANY GOOD DAY registered her maiden win on her second start on March 22nd. She’s up in class and in distance this time but looks nicely competitive in this company. (10) CHEONNYEONUIYAKSO was a four-length winner on debut and comes up in class and distance here and is expected to be on the early pace. (2) ROYAL CLUB and (12) SANGSEUNG POWER are others who should be getting close.

Four of these raced each other over 1000M on March 31st. (8) BEAUTIFUL MARINE finished the best of them in 2nd place for the third consecutive time. She tries further than the minimum for the first time today and looks really nicely in. (3) NEU DAT was 4th in that race, three and a half lengths in arrears, while (4) TAP SOCKS was 5th and both can be competitive here although the biggest danger is one who didn’t go that day. (2) ASTONISHING ran a very solid 3rd on debut over 1300M in a quick time having led for most of the way. He should have come on for that run and looks a big threat here.

It took (9) THUNDER RAIN a couple of goes to figure things out but he’s won three in a row and having beaten five of these on his way to a three-length score in the latest of those, looks in good shape to make it four today. He is carrying significantly more weight. (7) YEONGGWANGUIFORCE and (8) SEONGSAN SIMON were among the vanquished that day and with the weight swinging in their favour here, both have the opportunity to get closer. (5) GANGHAN JILJU remains winless after twenty-nine attempts but comes in having finished runner-up for the sixth time at a mile last month and he can be a danger here. (10) GIJEOKUI JEOKTOMA is one start into a comeback following six months off and can continue to progress here.

(9) GREAT ROCK returned from five months off to win by three-lengths at this class over a mile on March 22nd. He’s run well at this distance before and while he is carrying more weight today, he can win again. (4) BOUND MYEONGUN was 2nd in that race last month and he can be a threat again while. (5) CHOEGANG BULLET was a narrow class and distance winner last start. He too is significantly in the weights today but should still be competitive. (1) ALPHA RUNNER didn’t go especially well in a valuable race over 1400M two weeks ago but looks much better in here and should improve. (8) BLACK ARROW, up in class following a narrow defeat over a mile last time, tries the distance for the first time and could be a dangerous outsider.

After finishing 4th on debut in December, (8) MALIBU BYEOL proceeded to win his next two, comfortably scoring on his first try at this distance on March 8th. He is up in class today but nicely weighted and is favoured to win again. (2) DELMARUI GIJEOK remains a maiden after twenty-four attempts but comes in having run a good 4th in a stiff race at 1400M. This is the kind of race he goes well in and he can place again. (1) GYOHAKSANGJANG is potentially coming back into form and can build on the 5th place she scored last time while (10) DIAMOND KING should overturn the defeat he suffered at the hands of a couple of these on March 22nd. (11) MORNING KOREA looks best of the rest.