Doraonpogyeongseon faces off against Silver Wolf in a potentially electric renewal of the Kookje News Cup at Busan Racecourse on Sunday afternoon. The pair are joined by up and coming prospects Today, Ace Korea and King Of Ace in what could turn out to be one of the highlights of autumn. There are 6 Sunday races at Busan from 12:40 to 17:05 while at Seoul there are 11 from 10:45 from 18:00. Here are the previews with (unusually) Busan first. Horse by horse for the big race as well as for Seoul races 9-11:

Can Silver Wolf rise back to the top of the Sprint division on Sunday? (Pic: KRA)

(1) PARK MINISTER only managed 6th of 8 last time at class and distance and was beaten by (8) WHITE POINT, among others. Nevertheless, it was his first try at this class and he didn’t run badly. He’s worth another go today. (4) YEONGGWANGUI SIDAE is up in class following two smart wins over 1300M. She’s up to a mile for the first time as well but she should be able to overcome both of those things and can be dangerous. (6) BUGYEONG BOLT moves up in class too, in his case following a very good 2nd over 1300M last month. It’s his first try at a mile as well but it could well suit. It’s been a long time since (7) DONGBANG BULPAE’s solitary win but he comes in following back to back 2nd places at this class over 1200M and 1400M and he has previously gone well at this distance. He won’t be far away.

(6) A PURE GOOD MAN ran out a three-length winner at class and distance on October 7th. He carries an additional 4.5kg today, and he has been a touch inconsistent, but he should have enough to see off this field. (4) MR. KOREA returned from four months off to pull off a somewhat unexpected win at the distance a month ago. His reward is to move up in class but he’s very nicely weighted and may challenge for the places. The favourite may face stiffer competition from (1) MYEONGSIN POWER and (3) GAMUNUI YEONGGWANG. The former ran well for 5th in a tougher race than this last time while the latter is second up after five months off and should improve. (8) CHIEF TIME was 6th behind A Pure Good Man last month but has since run a solid 3rd at 1000M and may get closer today.

Verdict: 3rd in the Korea Sprint at 1200M and winner of the Owners’ Cup at a mile earlier this year, (6) DORAONPOGYEONGSEON has marked himself at as the Gold-Standard for horses in Korea over one-turn. A line can be drawn through the KRA Cup Classic last month as it can be for (9) SILVER WOLF too, although she ran rather well for 4th. Up until then, Doraonpogyeongseon had her number this year but she remains a fine sprinter and can’t be ruled out. The presence of those two makes this race a big litmus test for the up and comers. Peter Wolsley’s pair of (7) ACE KOREA and (11) KING OF ACE especially. If the race was at 1200M, Ace Korea could well be favourite but the extra furlong will be the big test here. The distance will suit King Of Ace very well and he could well pull off a surprise. The other main contender is (4) TODAY. Earlier this year he looked set to wrest the sprinting crown away from Doraonpogyeongseon but the older horse has since bested him twice at 1200M. Don’t rule him out here though.

It didn’t happen for (1) SUN DAY when sent to Seoul for the Jeju Governor’s Cup last month where she suffered her second defeat in six starts. Her previous one came on her only foray up to a mile and it’s interesting to see her sent up to 1800M for her Busan return. She has plenty of talent though and shouldn’t be ignored. It may be safer though to side with a couple who have already demonstrated ability at this class over at least a mile. (4) WONDERFUL MEMORY fits the bill having run a very good 2nd in a tough race on October 19th, beating a couple of decent ones along the way. It will be interesting to see how his front-running style works for him at 1800M, but he looks to have potential for more. (3) MORNING KOREA beat a couple of these on his way to 4th place at class and distance on October 14th. He’s only won one of nineteen but is rarely far from the money. (2) I’M YOUR MOTHER and (10) DAEHO MYEONGGA are others who could come into play.

(2) CHONGAL GACHI returned from eight months off to run 5th over this distance on October 21st, running after a slow start to finish ahead of three of his rivals here. His manners were poor that day but he should have come on for that run and could well prevail here. (9) RAON BULPAE finished 6th in that race, less than a length behind Chongal Gachi and can challenge again today. (7) AQUA STROM makes a comeback of his own today following five months out. He was going well before the layoff and trialled END_OF_DOCUMENT_TOKEN_TO_BE_REPLACED 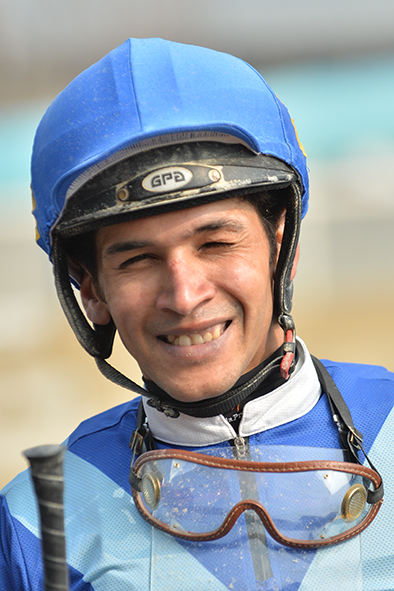 Johan Victoire rode 7 winners last weekend – he could get some more this Saturday (Pic: Ross Holburt)

(7) GLOBAL CHEONHA was an improved 4th on his second career start a month ago. He’s shown the most of these in terms of speed and he can finish on top here. (1) DALLYEORA GWANGSAN led for much of her latest start at 1300M ultimately finishing 3rd. The step back in trip should suit and she should lead again. (5) VICAR BRACING was 5th in that same race and also looks to have scope for improvement. (6) NAMJJOK NARA and (9) LEISUER KING are both more experienced and while a win may be unlikely, both are capable of finding the money in this kind of company.

Juvenile maidens here with only three of the twelve having raced before. We’re going to value that experience though and put two of those three on top. (7) KING OF SUNDAY and (12) FULL MOON SKY came home 5th and 4th in their respective first outings in October. King Of Sunday posted the faster time and with a more favourable draw to get the lead, is the slight top pick here with Full Moon Sky a clear second choice. The first-timers don’t really set the pulse racing although (2) PRIMA NIKE looked useful in his trial and may well go to the lead here. (3) RECOVERY TAP and (4) SUN OF THUNDER are the others who look to have the most potential to go well first up.

More juvenile maidens although this time eight of the twelve have prior racing experience. A few of them have gone well too with both (2) THANK YOU MOTHER and (11) HOMECOMING having run 2nd on their respective debuts. Thank You Mother was perhaps the slightly more impressive and is likely to be favourite hee. (4) CHODONG BOBAE and (9) BIG PRO also showed ability in their first starts and both have claims to improve here. (12) GAL IP made her solitary start all the way back in July. It didn’t go terribly well but she’s subsequently been through a number of trials and can improve here. Of the first-timers here, a watching brief is probably the most prudent course of action with (3) YAHO WHITE CAT being the best looking at this stage.

Yet more juvenile maidens but this time it’s fillies only with four racing for the very first time. (5) MISS GELLA has raced twice and on the second of those showed some ability, only beaten half a length into 2nd place over this distance on October 14th. She led for much of that race, will be on pace again and can win this time. (7) WONDERFUL PANGPANG was 3rd that day a full four-lengths behind Miss Gella but showing enough improvement from her debut to suggest she has more to offer. (9) MONEY POCKET was a promising 3rd on debut despite racing greenly and can build on it here while (2) GOLD PARTY got bumped about a bit at the start of her latest outing and ultimately weakened having previously raced well on debut. OF the first timers, (4) SYDNEY MONEY looks the pick.

(6) BLUE FIRE was sent off as favourite for his latest outing on October 27th but having led from the gate, weakened in the home straight. He may not have to work very hard here though to get the lead again and is worth another chance. (1) K ZONE secured his best finish in thirteen starts last time when running (a distant) 2nd at this distance. He has been getting steadily closer and shouldn’t be far away today. (3) GEUMBIT END_OF_DOCUMENT_TOKEN_TO_BE_REPLACED