The 3rd Korean Autumn Racing Carnival featuring the Keeneland Korea Cup and Keeneland Korea Sprint has been and gone and once more, the highlight of the local racing season made for an interesting and exciting week. 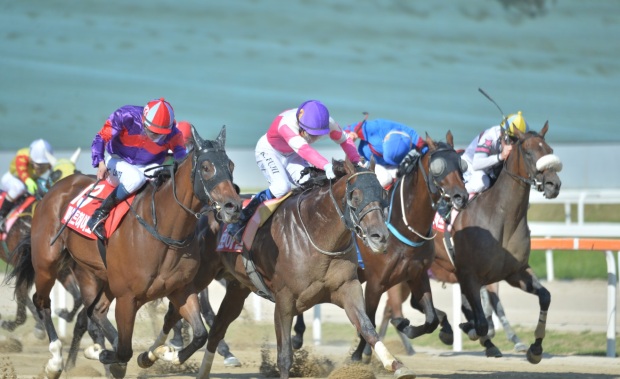 Moanin (purple cap) gets the better of Fight Hero in the Korea Sprint (Pic: KRA)

The Sprint was a well-run race that saw a tight finish contested by two good horses. Moanin – the highest rated horse in the race – ran out the narrow winner under a vigourous ride by Joe Fujii who added the Sprint to the Cup he won two years ago on Chrysolite.

While the decision to enforce the widest gate on Hong Kong entrant Fight Hero attracted some scorn, it allowed the habitually difficult starter a trouble-free trip and possibly crucially, not a bit of sand in his face the whole way around. Under a very good ride by Derek Leung, Fight Hero made the most of that with a great late run that saw him duel with Moanin in the final 300 metres and almost beat him. 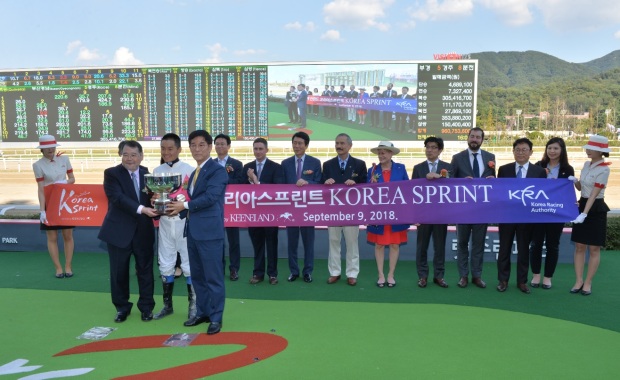 Chublicious navigated a trickier route through but also finished off very strongly for 4th. The US-trained gelding had won plenty of admirers throughout the week for his kind and friendly demeanour in the barn but once out on the track, proved he is a proper racehorse too. over the two years that American horses have been coming, they have a 3rd (in last year’s Cup) and back to back 4ths in the Sprint with all three adjusting the surface very well. The Sprint looks a winnable race for a top level American Sprinter.

Wild Dude ran better than he did two years ago, gettng out to a fast start and while he faded, still managed to come home in sixth place. It wasn’t to be for France’s King Malpic, however, who was scarcely involved and came home last.

Doraonpogyeongseon ran 3rd for the second year in succession, consolidating his position as the host nation’s top sprinter even if that means he’s just a little bit below the standard necessary to win a race such as this. Could that standard be achieved next year by Ace Korea? The only three-year-old in the contest was on pace until the final furlong and while the extra power of the older horses then kicked in, he looks a huge prospect for further improvement. 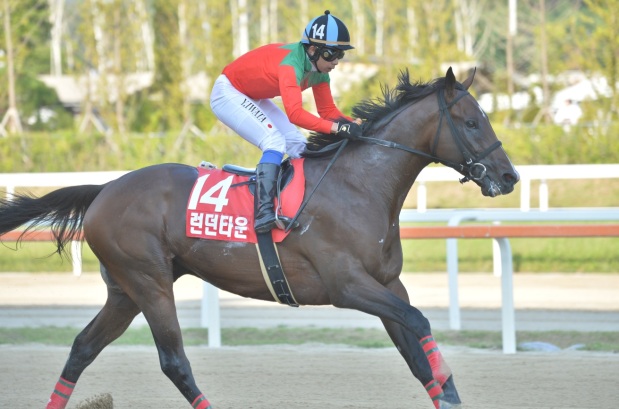 As to the Cup, it is perhaps best to simply look on it as simply a sensational performance by London Town. Yes, his form coming into the race wasn’t as imperious as it had been last year but from the moment he set foot on the Seoul sand last week, he looked a winner. Drawn wide again, he was hustled to the front by Yasunari Iwata (who picked up a two-day ban for his troubles) although it was Cheongdam Dokki who got to lead into the corner.

London Town went past Cheongdam Dokki with five furlongs still to run and for a moment it looked like Iwata may have gone to soon. A very very brief moment. From then on, he was relentless and strung the in now way weak field out in the manner of a three-mile steeplchase. Dokki was done, coming home 4th with Dolkong getting the closest on the line. Although “close” is perhaps not the best way to describe a 15-length deficit. London Town had so destroyed the field that Clean Up Joy was able to run on late for 3rd ahead of the tiring Dokki and the game Forest Ranger, who ran a good 5th for Richard Fahey. 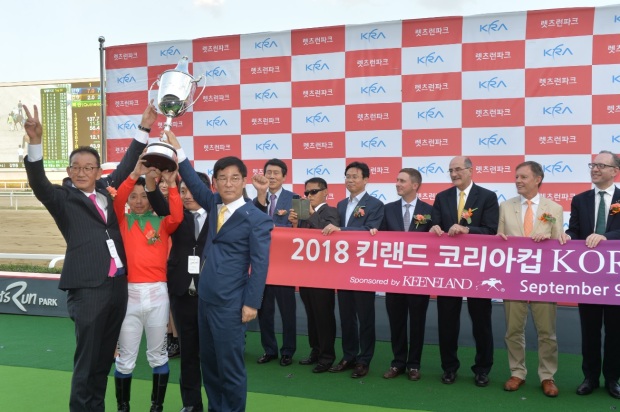 While successful at Group 2  level on more than one occasion, London Town is yet to win a Group 1 race in Japan. Hopefully he can go on and achieve such a feat in the forthcoming months. Dolkong’s 2nd place was the best finish by a Korean horse in the race to date and if his injury problems are behind him, could go on to be a big player in the months to come. Him against Cheongdam Dokki in the KRA Cup Classic next month, if it comes to pass, could be something to savour.

Singapore’s Maximus ran well but was one of those broken by London Town’s surge and ultimately finished 8th. Riven Light ran in midfield in the early exchanges but ended up eased. That was disappointing given the amount of goodwill the horse had generated in the lead up to the race and the star-power he attracted with Rich Ricci, Willie Mullins and Ruby Walsh all in the parade ring. 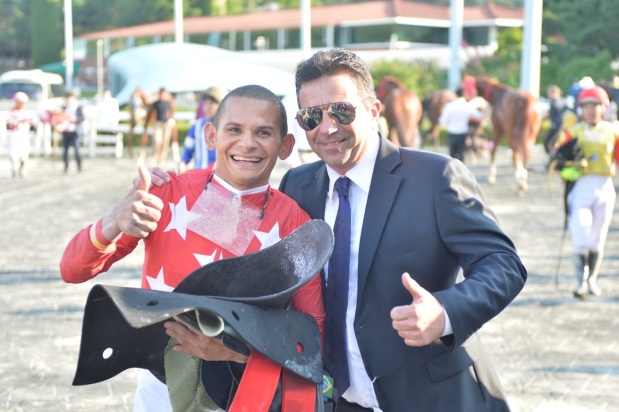 The races were simulcast for betting in numerous countries. The Sprint was shown during the Sunday program at Sha Tin – and Hong Kong turnover on the race was actually bigger than the Korean turnover (Fight Hero started as 3rd favourite in his home country, compared to 2nd in Korea – both markets had Moanin on top). In the USA, TVG showed both races while At The Races’ coverage of the Cup was the first time a Korean race had been shown live on a British racing channel. Domestically, like last year, KBS N Sports recorded the races and produced a 75 minute highlight show (pro-baseball taking priority in the live slot).

In terms of attendance, it was free-entry to Seoul Racecourse on the day although in the end the on-track attendance was almost the exact same as last year at just over 39,000. Betting turnover on the Sprint was  4.06 Billion Won and 5.15 Billion Won on the Cup; the Sprint being slightly down on last year and the Cup a tiny bit up.

The official events were slightly more low-key this time around although that’s not necessarily a bad thing and the barrier draw taking place in the parade ring on the Thursday before the race instead of at a hotel seemed to work. Naturally, however, there was still a K-Pop group performing before the Cup presentation. On track, with horses representing nine different nations (including Korea), it was the most diverse event yet. The presence of the Melbourne Cup Trophy touring the racecourse also added a pleasingly cosmopolitan touch. 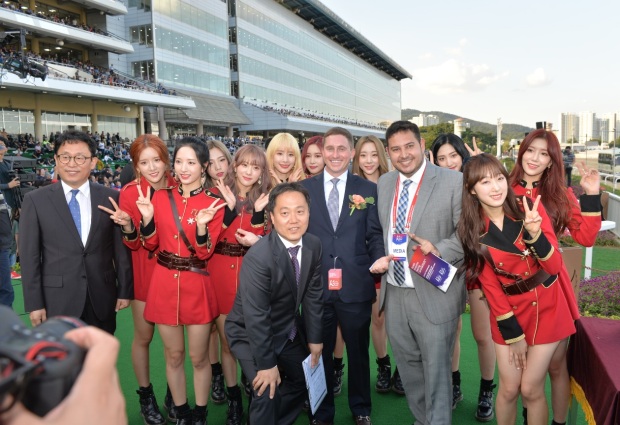 There will be murmurings of disquiet locally about both races being won by Japanese horses and that visitors from across the East Sea have now won five of the six carnival races across the three editions (Hong Kong’s Super Jockey in the inaugural Cup being the odd one out). However, the Sprint was an exciting race while the Cup saw a genuinely world-class performance. The event continues to slowly but surely make its mark in the racing calendar and its development in years to come can play an important role in the integration of Korean racing on the international stage, which in turn can strengthen its standing at home.