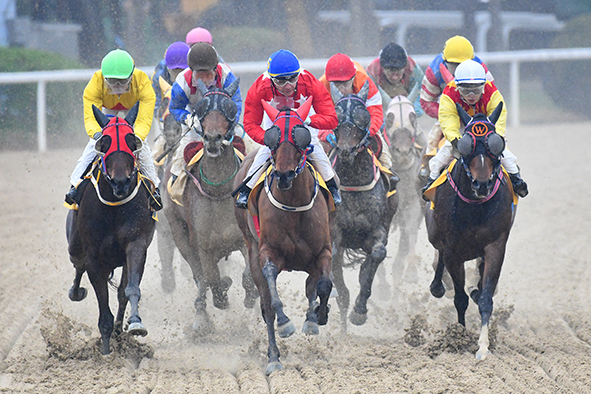 Antonio Da Silva (centre) was among the winners on a good day at Seoul for foreign jockeys on Saturday. Can he get more on Sunday? (Pic: Ross Holburt)

Three debut-makers among the ten who go here and one of them stands-out. That’s (2) NAE GIRUI BIT, a Raconteur gelding, who went through a couple of trials in March, making all in the latest of them. That was impressive enough to suggest that if he runs anything like it in this modest contest, he could win. Fellow first-timer (6) RISING SOCKS trialled well too and should be in the hunt although the biggest danger is likely to be (3) TIAGO TOUCH. While indifferent on debut over 1200M in December, he returned at the end of February to run a much improved 2nd at this trip and must be taken seriously here. He’s certainly the best of those with prior race experience although (1) SEUNGNI LIKE and (8) DAEJI GONGJU may improve.

(6) NAEGA KKEUTPANWANG has been close in each of his latest four with two 3rds and two 4ths, all of them at this distance. He’s drawn well to get on speed early here and can win. Luigi Riccardi’s (9) DUAL CHOEGANG enters in promising form too. He beat a couple of these on his way to a useful 4th last time out and can get closer here. One of those two in that race three weeks ago was (1) CHOWON YEOJEONSA back in 5th. Just like Dual Choegang, she remains a maiden after thirteen attempts but has enough about her to beat plenty here. She’s not a fast starter but can pick off horses late on. (2) RAON PRO SENSE and (7) WHITE PUNCH are others to take into account.

(1) BEST CHAPEL secured her maiden win at the third time of asking with a front-running performance at this distance on March 3rd. She’s up in class today but has little to fear and can make it two in a row in this all filly/mare contest. (6) SEOUL STORY and (9) NEUNGRYEOK SIDAE join her up in class following maiden wins of their own and while the pair of them perhaps have a little more to find, both can be competitive. Of those with prior experience at this level, (4) KWAEHAN YEBONGSAN is the biggest danger. She was a decent 5th last time at this distance and is likely to join Best Chapel in competing for the early lead. She has every chance. (10) LEAD UP also comes in with encouraging recent form and is another one with good gate speed.

(10) SUPER FLY returned from a nine-month layoff to run a good 3rd over class and distance on March 10th, beating a couple of these in the process. He should have come on for that run and if he has, he’s take some beating. (9) THE FINAL finds herself up in class after beginning her career with three consecutive 3rd place finishes. While the level may be different, the strength of the opposition is nothing to fear and she can be competitive. (5) SPECIAL LIGHT ran 5th behind Super Fly last time and while he has plenty to make up on the favourite, he should be beating plenty of the others. (11) HAETSAL WANGJA and (12) JAJINMORI both enter off encouraging latest runs and can come into consideration.

Jimmy Creed colt (4) SPEED JOY was a very encouraging 2nd on debut at 1000M back in January running on nicely. He’s had plenty of time off since and should appreciate the additional distance that he has to play with here. (9) GEUMA FALCON gave out similarly positive signs on his first start last month and looks to have an excellent chance of improving on the 4th place he achieved at 1200M in a similar strength contest to this one. (6) HAPPY BOY was an improved 3rd at 1000M last start. He also has a 2nd place to his name at this distance and should be on the early speed today. (1) KEY FACTOR and (11) FLYING MUNNING, 4th and 5th respectively over 1000M on March 3rd, should also be in the hunt.

After coming up slightly short on debut, (4) JANGSAN WILD romped to an eight-length victory on his reappearance on March 18th, striking the front in the home straight and running on very nicely. He is up in class and in distance, but neither should give cause for concern and he’s favourite to strike again. (1) CAMP TOUCH is up in class too following a 2nd and a pair of 3rd places. Each time has been in decent company and he should be capable at this level too. (12) GEUMA THUNDER was promoted in a similar manner and ran a solid 2nd place in an all-filly race at this level over 1300M four weeks ago and should get close here (6) BOLD NINER’s recent form reads well and she steps back up in trip today while (11) WITH FRIENDSHIP enters after back to back 3rd place finishes and can at least match those here.

(10) ICHEON SSAL began his career with two wins and while he didn’t make the Classic trail, he looks very much like he’s coming back into form. He just missed out by a nose last time at class and distance and should make no mistake today. (8) LEONNING STROM also missed out when favourite last time, coming home in 2nd place over 1000M. It was enough to see him promoted to this class anyway and he should be competitive, most likely ridden to the front as early as possible. (2) FIRE BALL outperformed his odds to run 3rd at class and distance on March 11th and will be much better supported today. (1) ROCKET ROAD and (5) SARYEONI WIN are others who should get close.

A front-running winner at this trip at class 5 in January, (5) STORMY has followed up with a 4th and a 3rd at this class since. He was favourite last time but didn’t manage to get as far forward as he likes. This time, expect him to be on speed early and he has every chance of going all the way. (10) ALPHAKAN ran 2nd in a quick class and distance race on March 4th and will be a danger while the experienced (3) BEYOND LIMIT steps back up into this trip after coming back into form in recent starts at shorter distances. (9) SUPER BROAD was going well in the latter half of 2017 and while his final race of the year on Christmas Eve was underwhelming, he comes in here of a sixteen-week layoff and can be given a chance. (7) SILVER HERO ran smartly enough for 5th at the distance four weeks ago and should be in the money hunt today.

(10) LEGEND KING beat (11) EAST PALOS as the pair 3rd and 4th at class and distance on March 17th with a couple of others who go here well back behind them. Less than a length separated the pair that day and East Palos, who was racing at two-turns for the first time, should have come on for it and can overturn the form here. Legend King should be a factor although a more severe test may come from (7) ARCH ARCH, who ran a decent 4th in a slightly stiffer race than this at the distance just two weeks ago. (1) GREEN K has won three of five starts to date and is up in both class and distance here. He’s going two furlongs further than he’s raced before but he should be on the early speed and he could well stay on. (9) DOSI NONGBU has raced in challenging company of late and gets another chance here.

(3) ULTRA ROCKET beat (2) DAE JYUSIN by a head as the pair came home 1st and 2nd at class and distance on March 4th. The latter will enjoy a 4kg weight advantage today, but Ultra Rocket is a very solid performer and could well win again. They both need to worry about (10) O.K. YEONDAB. She finished last year running 2nd to Silver Wolf in the Gyeongnam Governor’s Cup at Busan and in her only start of 2018 so far, ran 4th behind the same horse in the Donga Ilbo Cup. That’s some decent form and she can come from off the pace to go very close today. (4) NANCHOUI GOHYANG weakened late on over 2000M last start but should be more comfortable with a furlong less to worry about today. (8) CHEONJAILU is up in class following a good win over 1200M last time and also tackles two turns for the very first time. He’s run on well on a number of occasions and should be able to cope with it.

(12) ANOTHER SMART ONE is starting to prove himself at class 1 and while he could only manage 5th when 2nd favourite behind Silver Wolf at the distance three weeks ago, he ran on well after an awkward start and if he can put himself in contention here, the Smarty Jones gelding can win. (2) GOLD MUSIC ran a creditable 5th place in the Owners’ Association Trophy a month ago and enters his first class 1 handicap under a nice light weight and with a good draw to get to the front early. (8) GLOBAL FUSION was well back in that race but is better weighted today and should be much closer. (10) BRIGHT CAT ran a good 4th at 1400M on March 4th, beating a couple of these along the way. He drops back to six furlongs for the first time in over a year and should at least match that finish. The ever-reliable (4) DAISYAN has been beaten by a few of these lately but ran really well at 1800M last month and could go better today.