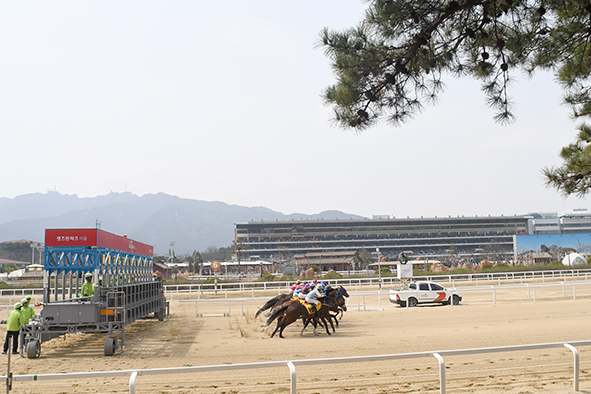 Small field of three-year-old maidens but several have chances. (1) HALLA DAERO has shown progress in two starts so far. He led until the just over a furlong out last time before weakening and could well get a very soft lead once more today. (5) L CAR will be expected to do much better today than on his debut five weeks ago. That day he began badly and raced ungenerously to the extent he was ordered back to trial. He performed very well in that subsequent trial, putting in a fast time. (9) SO ARA DAEWANG wan a creditable enough 6th of 12 on debut a month ago and can build on it here. (4) GANGHO GAECHEOK similarly showed enough on his first try to suggest he has some ability.

Maiden fillies only and it’s fair to say none of the eight will be expected in the Korean Oaks later this year. We’ll go with (7) HYEONGMA PUBU on the simple grounds that having run just the once, she’s done the least amount wrong. She actually ran reasonably well in a respectable time over the distance on March 11th and if she has come on at all, should beat most of these (3) YONGUI JUDO steps back in trip following some reasonable efforts at 1300M and should get close. (8) CHEONGDAM QUEENS was an encouraging 5th on debut all the way back last September and while she hasn’t come close to matching it in just three starts since, she does have the advantage of being quick out of the gates and should get the lead here. She’ll be challenged early by (5) SEOUL STAR who looks best of the rest along with (6) CHUKJE MAKIT.

The second division of the maiden fillies and it’s not much stronger than the first. It does involve one or two who have experience of finishing in the money though. Top choice is (1) SOKBO ONGJU, 3rd over 1300M on March 18th having led for part of race. Back in distance today, she’ll look to lead early again and won’t need to hold on for so long this time. (3) STAR SOCKS also has a 3rd to her name, achieved on debut on Christmas Eve. She followed it up with a 4th and while she was pretty poor last time, well back behind (8) CHAPEL QUEEN, she’s worth another chance today. Chapel Queen has actually raced once since then, just two weeks ago, but it was at 1200M and she never got involved. She too can get another chance back in trip here. (5) MJ JILJU improved slightly on her second career start last month and she can continue her upward trajectory today, likely looking to challenge Sokbo Ongju and Star Socks on the early speed.  (7) KAILLUM YEOJE is the sole debut-maker. She did nothing wrong in a March trial and has a top jockey on so watch the market with her.

The maidens keep coming thick and fast (although speed is perhaps something not in plentiful supply). (2) CHOIN DAEBO will be favourite and should win having run a good 3rd on debut despite not starting especially well. He’ll be close to the early pace here and the extra furlong should suit. The main dangers look like being a pair of first-time starters. Both (4) PALPAL VICTORY and (8) BURUI GORI trialled up nicely in March, running on well, and both haver every chance of going well first-up. (6) ACE CANT was an improved 3rd in tougher company than this back in February and returns following nine weeks out. (7) FIORE is one start into a comeback after a five-month layoff and can improve today.

(12) JUMEOK DOKKI came from just off the pace to record his maiden victory by a three-length margin over this distance on March 11th. He is up in class today but shouldn’t have much to fear here and can win again. (8) JAELONGI remains a maiden after eleven attempts but hasn’t been far away in recent outings, beating a number of these in the process, and should be close here. (9) BAEKSAN GUNJU bumped on leaving the gate last start and never featured but he is better than that and should be worth another chance here. (3) CAPTAIN POWER is another who is up in class following a maiden victory. That was unexpected, and he does perhaps have a bit more to find than Jumeok Dokki but he can still acquit himself well. (4) REBECCA comes in off a decent 3rd place in an all-filly race at class and distance last time and should get an easy lead.

(4) GANGCHEONUI BYEOL arrives with a 100% record to defend having made all to win both her starts so far. She is though up in both class and distance and while she is both the pick and the likely favourite, this won’t necessarily be easy. (2) ROYAL ACE got it right at the thirteenth time of asking three weeks ago, just prevailing by a nose. He’s up in class too and should be a danger. (7) CHEONHA JEWANG races for the first time since January but already has a 3rd place at this class – when he was narrowly beaten out in a tight three-way finish on Christmas Eve – and can come close. (3) SMARTY ZIF can be forgiven her latest and is likely to challenge Gangcheonui Byeol for the early lead. (6) WELLBEING STORY looks best of the rest.

(6) SPECIAL STONE got his maiden win in what was, frankly, a dreadful race at this distance back in February. He did his part though, winning by six-lengths and was then just beaten half a length in a much better contest at the same distance at this class on March 10th. He’s a front-runner and can go all the way this time. (3) AJU PAEWANG was well back in that March 10th race but already has a 2nd and a 3rd at class and distance to his name and carries 3kg less today with an apprentice jockey on board. (10) MONDAY MONEY enters after solid efforts in her latest two and shouldn’t be too far away.  (7) DREAM INDY is up in class after a 3rd and a pair of 2nd place finishes. He’s also the only one of these trying the distance for the first time, should be on the early speed with Special Stone and could go very close. (1) LUCKY MISTER went a bit cold in his last couple of outings but comes in off nine weeks out and can improve today.

(7) BID TOWN beat three of these on his way to a three-length victory at class and distance on March 11th. He carries an extra couple of kilos today but under David Breux, could well repeat. That day Bid Town actually reversed the form on (5) SEONGEUN GANGJA who had beaten him in both their previous meetings earlier this year. Seongun Gangja is consistent and will surely be close again. (2) ROYAL AMOS also ran in all three of those races and while he has more to find, could be in the placing frame. A bigger danger though could be (8) ROAD KING. He enters following a 2nd and a 3rd place at class and distance a fresh off a nine-week break should be firmly in the hunt. (9) WHIZ REINA steps up to two turns for the first time and looks to be best of the rest.

Wide open handicap here but we’ll go with (11) TAP FASHIONED. He was a very useful 2nd in a race of similar strength (if smaller field) on March 10th and there is perhaps more to come from him. That’s the case too for (3) TO GO WIN, who is still a maiden but is up in class following tree strong runner-up finishes from her first five starts. She raced very well over 1300M last time and even at this class, a win is surely in her near future. (2) SERA KING beat three of these on his way to 2nd place over class and distance five weeks ago and has to be taken seriously here. However, (5) NEORANEUN CHUKJE, who was 3rd in that race on just his fourth career start looks to have improvement in him and can overturn that form today. Also making just his fourth start that day was 4th place-getter (9) EAST GULCH. He remains a a maiden after three battling 2nd place finishes from his first three starts but is another progressive looking type who can get close here.

Races 10 & 11 will not be simulcast overseas so selections only for those: